To Honor Its Beer Trail Conquerors

The dinner was hosted by the Mass Brewers Guild, the craft beer industry’s trade association, to celebrate fans who achieved Beer Trail Conqueror status by visiting 100 breweries in one year using the nonprofit’s passport program. The mobile app, “Mass Craft Beer,” celebrated its one year anniversary this past September and currently has 9,800 downloads. 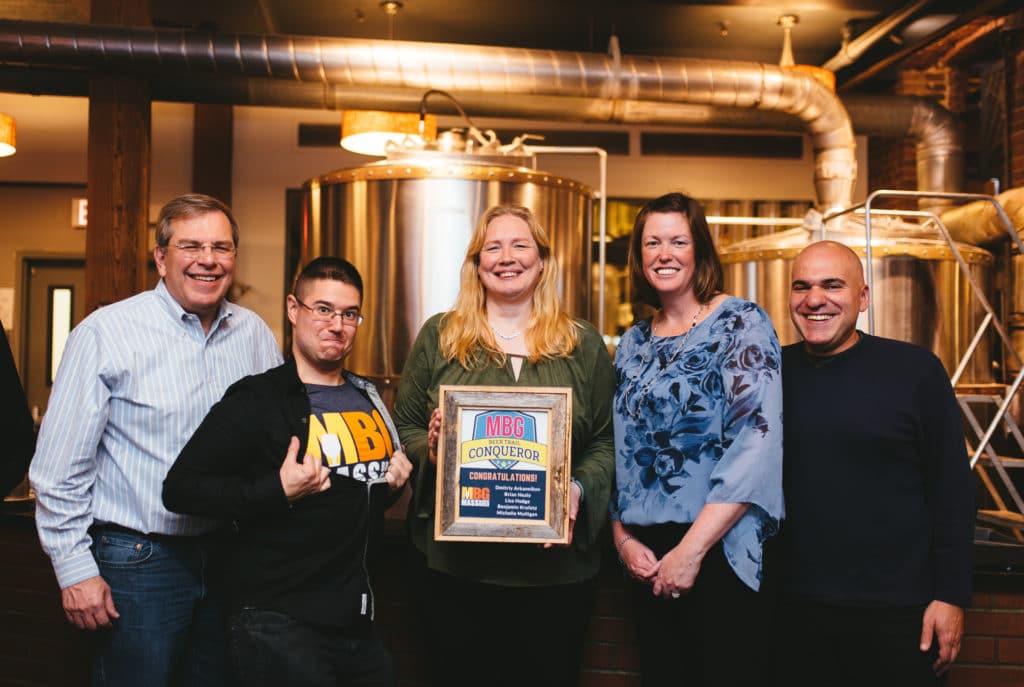 Brian Healy of South Easton, Benjamin Krefetz of Cambridge, Lisa Hodge of Sutton, Michelle Mulligan of Whitman, and Dmitriy Arkannikov of Waltham, all won seats at the table.

Seventeen craft beer super fans took on the challenge and conquered the trail. Five names were drawn at random to attend the Mass Craft Beer Dinner. In some cases attendees left their spouses, who were also Beer Trail Conquerors, behind. “I was getting the silent treatment as I left tonight,” joked Lisa Hodge, whose husband Geoff was her craft beer traveling partner across the state. “Thankfully he’s out with friends enjoying some craft beer tonight too.”

Many of the Beer Trail Conquerors had coincidently met before, either striking up a conversation at one of the Mass Brewers Guild’s festivals, or bumping into one another at breweries while chasing each other on the leaderboard. 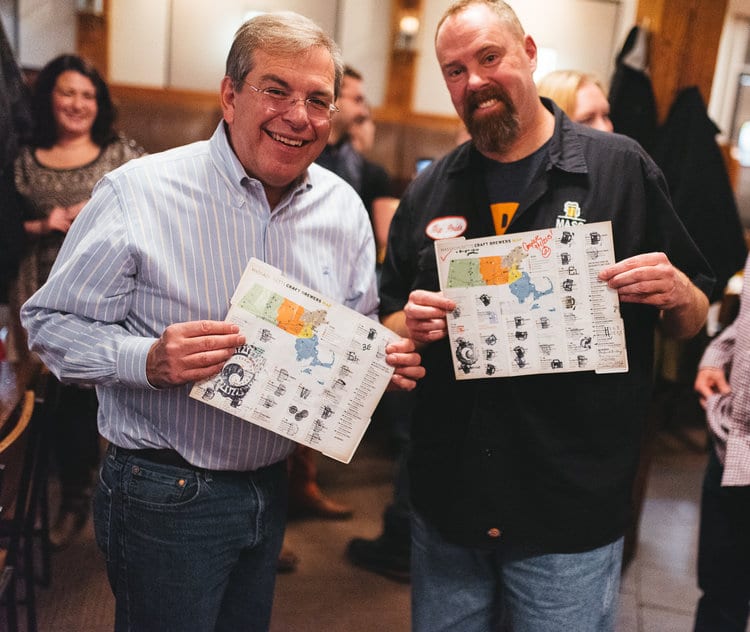 Brian Healy was the first to complete the trail, with Bob Kelley, co-founder of the Mass. Brew Bros., hot on his heels. Both Bob and Brian carry their original Mass Brewers Guild paper passports in their wallets and as new breweries open they see if taprooms can stamp them for old times’ sake.

The Mass Brewers Guild saw the need to digitize the program so they could keep it updated in real time. The app also reduces paper waste and ensures that craft beer fans will never miss another stamp with the app on their phone.

“I never would have visited towns like Sheffield or Nahant if it weren’t for the mobile app,” said Dmitriy Arkannikov. “I found so many hidden gems along my travels – amazing restaurants, pie shops, doughnut shops — it was a great way to explore the state. I am excited to do it again.”

The original paper passport program only featured 43 breweries when it launched in 2013. Today, Massachusetts has more than 160 breweries, with 30 in-planning slated to open in 2019.

“It was amazing to meet such dedicated craft beer fans and hear about their passion for the MA beer scene, says Rob Burns, cofounder of Nightshift and president of the Mass Brewers Guild. “We really are spoiled in MA from both a brewery perspective and a consumer one.”

The free app is available in iTunes and Google Play stores and is made possible thanks to the generous support of the Mass. Brew Bros. who assist with data collection, Fat Basset Design who provides badge artwork, and to New England Label for their marketing support. Funds raised through the Mass Brewers Guild’s festivals, Power Beer Fest and the Mass Fermentational, help to cover development updates and maintenance costs. 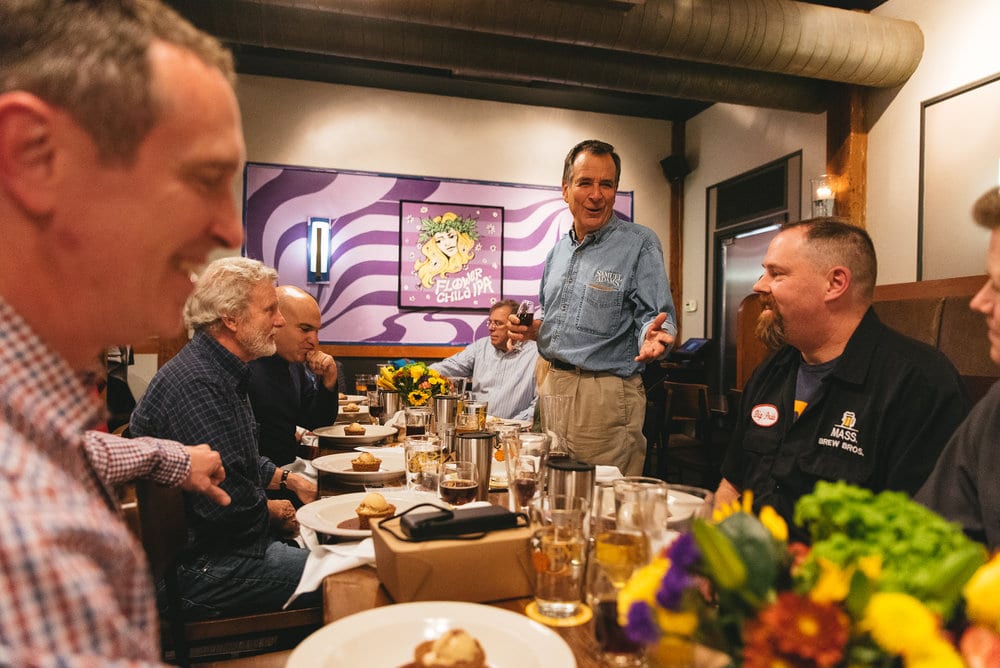 The four course beer pairing dinner ended with a blondie drizzled in beeramel, topped with CBC wort ice cream, and paired with a sipper of Samuel Adams Utopias 2017. “If you didn’t drink it, we couldn’t make it – so thank you — cheers,” said Jim Koch, founder of Boston Beer Company. 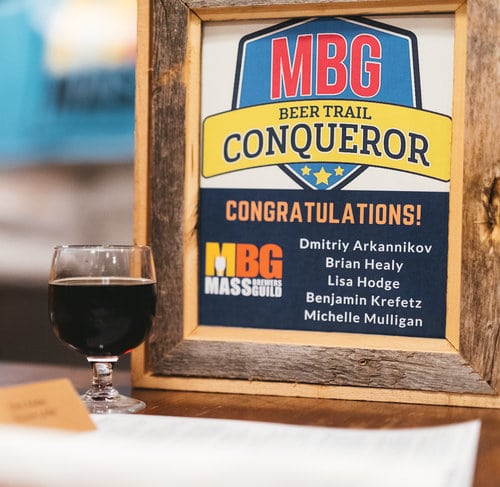 Founded in 2007 by a group of committed and passionate brewers, the Mass Brewers Guild, is organized for the purposes of promoting craft brewing and protecting the interests of craft brewers across the Commonwealth. The association is membership based and open to all Massachusetts breweries licensed by the federal Tax and Trade Bureau and the Commonwealth’s Alcoholic Beverages Control Commission. The nonprofit creates a community of brewers while shining light on the broad range of breweries and styles offered throughout state.Through industry and educational events, its mobile application beer trail map, and by providing resources and marketing support to brewers, the nonprofit works to highlight Massachusetts as a top travel destination for craft beer in the U.S. The board also continues its work at the legislative level, fighting for license and franchise law reform, and serving as the voice of craft brewers on Beacon Hill. The Massachusetts Brewers Guild is a 501(c)6 not-for-profit corporation.