Here’s How Upcoming Mass Beer Week is Shaping Up

As Mass Beer Week approaches, April 20-28, we thought it might be helpful to share some of its highlights so you can make the most of the state’s third annual celebration of Mass-produced beer. Be sure to use the hashtag #MassBeerWeek on social if you attend an event. Below is what we’ve heard about so far.

Join Beeradvocate as they kick off the week Friday night with a non-ticketed event at KO at the Shipyard in East Boston for some cantastic Mass-produced beer and delicious pies. The beer list and additional details will be posted soon.

That same night, one of the state’s lesser known nano brewers, Saltbox Kitchen Brewery, is hosting a 3-course spring dinner and beer pairing at their restaurant and brewery in Concord. More details here.

Another chance to get all foie gras fancy with beer and food is to hit up Down the Road Beer. Co. and its Brew Chef Project on Tuesday, the 24th. This one features a special release of a Triple IPA. Get tickets here.

A number of breweries are coming together to host Mass Brewers Guild Pint Nites, with the goal to raise awareness and funds for the state’s non-profit trade association. All participating breweries will donate $1 of their beer sales that day to the MBG and its efforts to protect and promote the interests of craft brewers across the Commonwealth.

Medusa Brewing in Hudson will lead off with their Pint Nite on Monday the 23rd, Maynard’s Battle Road will follow on Tuesday the 24th, CraftRoots in Milford and Boston’s Harpoon will take their turns on Wednesday the 25th, and Plymouth’s Mayflower Brewing will be one of five breweries participating on Thursday, the 26th. Gardner Ale House (Moon Hill), Sam Adams, Jack’s Abby and Night Shift are the others.

Details are a bit scant, but drinking local will be even easier than usual at Rail Trail Flatbread in Hudson on the 24th, when the gastropub plans to host a Beer Week event with plenty of Mass-produced beer.

Another good way to celebrate Massachusetts breweries would be to hit up the Oak Long Bar & Kitchen Pink Boots Tap Takeover event on the 25th. They’ll be pouring eight celebratory brews from prominent female brewers including Brienne Allen at Notch, Liz Kiraly from Bone Up, and Maureen Fabry of CraftRoots. The Foundry in Northampton will have a similar event on the 26th featuring brews from Western Mass. brewsters.

If you’re closer to Boston on the 26th, consider joining the Mass. Brew Bros. for a special beer release as we celebrate both Mass Beer Week and National Pretzel Day at Dorchester Brewing Company. We teamed up with Josh and Shawn Briggs of Grafton-based Wicked Twisted Pretzels and DBC head brewer Todd Charbonneau to create a pilot batch beer just for the occasion. More event details here.

This would also be great week to learn more about the story behind your neighborhood brewery. For that, you’ll want to check out upcoming Beers with the Brewers events from Craft’d. They’ve got exclusive guided tastings with the brewers themselves at Battle Road on the 24th, Easton’s Shovel Town on the 25th, and Boston Beer Works on the 26th. 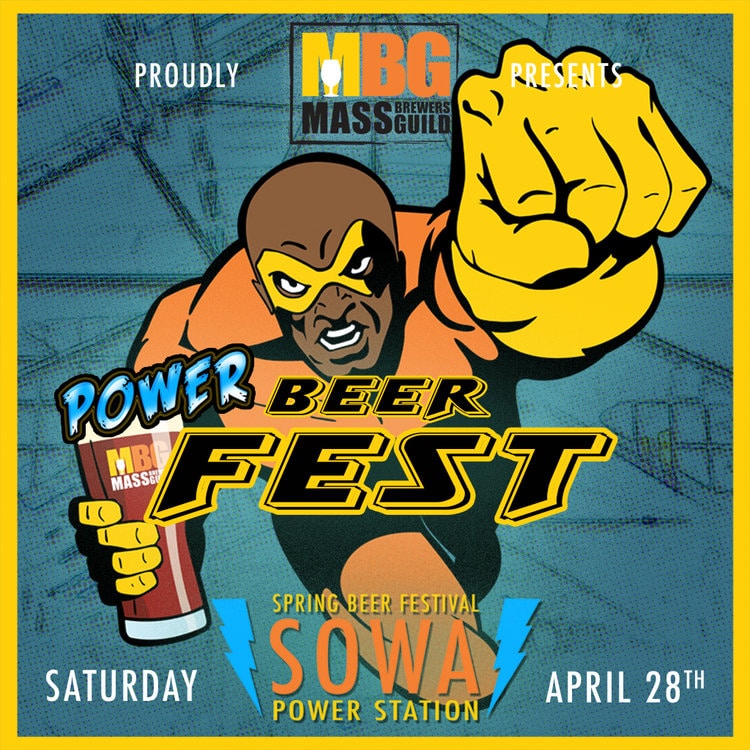 The MBG has partnered with Lyft to provide 50% off a ride to or from the SoWa Power Station on April 28th. Enter coupon code POWERBEER in the promos section of your Lyft app to receive the discount.

The Mass Brewers Guild brings its successful Power Beer Fest back to the SoWa Power Station for a second year to showcase more than 60 local breweries, all under one roof. The event expects to draw 2,000 craft beer lovers to its two-session sequel that will be held on Saturday, April 28 from 1 to 4:30 p.m. and 6 to 9:30 p.m.

All proceeds from the ticket sales of Power Beer Fest will support the Mass Brewers Guild, the state’s nonprofit organization that works to protect and promote the interests of craft brewers across the Commonwealth. This is the only beer festival run by brewers, for brewers. Tickets are $55 each.

It’s shaping up to be a great week, and we hope to see many of you out there drinking local. As more events are anounced we’ll share them on social media. Cheers to Mass. Beers!