Aeronaut Brewing Co. and Mass Audubon to release “For The Birds” IPA

PRESS RELEASE / August 26, 2019 (Someville, MA) – On August 29th, Aeronaut will be releasing a special collaboration beer with Mass Audubon, in support of their mission to protect the nature of Massachusetts. Having participated in the nonprofit’s annual “Birds and Brew” fundraiser for the last four years at its Boston Nature Center location, Aeronaut was eager to further their relationship with Mass Audubon through the collaborative development of an innovative IPA. The two organizations hope that the beer release will increase the visibility of Mass Audubon to the craft
beer community and beyond. In conjunction with this release, Aeronaut will be making a donation to Mass
Audubon.

“Part of Aeronaut’s mission is to amplify the voice of our community through beer and to celebrate the
things that enrich our daily lives, like music, art and nature,” says Ronn Friedlander, co-founder of
Aeronaut Brewing Co. and self-declared bird enthusiast. “Local nature preserves are very important to us
city dwellers because they provide places where we can escape the noise and commotion of urban life
and if we’re lucky, see a few animals. Some Aeronaut team-members are birders and we’re thrilled to
help highlight the great conservation and outreach work Mass Audubon is doing.” 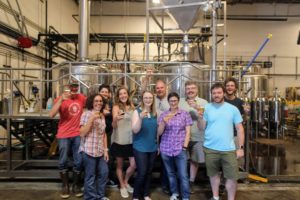 Members of Mass Audubon joined the Aeronaut team during the brew day to learn about the brewing process, sample wort, smell the hops, and talk all things beer and birds. “Our staff had a blast touring Aeronaut’s facility, and we loved learning about the brewing process. We even found some cross-over between the science of brewing and bird conservation, like how the same techniques used to analyze bird DNA can be used to ensure that only the right kind of yeast grows in a beer!” says William Freedberg of Mass Audubon’s Bird Conservation Department. “This collaboration helps us build awareness of environmental issues, connect people with nature, and of course, fulfill our dream of holding a raptor demonstration in a brewery.”

The concept of the beer, appropriately, is a New England style IPA but with a twist. In honor of the birds,
the beer features pale malted millet (a popular bird seed) in the grain bill. El Dorado, Azacca, Chinook
and Cascade hops create a tropical aroma to complement the nutty bitterness from the millet. The result
is an innovative, yet true-to-style example of a New England IPA—hazy, fruity, and highly drinkable.

The label artist, Allison Tanenhaus, designed four different labels in total to create a four-pack of different
can designs. Each one highlights a bird that Mass Audubon is actively working to protect (these include
the Osprey, Least Tern, Saw-whet Owl, and Eastern Bluebird). The beer will be packaged and released
on Thursday, August 29th. Cans will be made available for sale at the Aeronaut taproom in Somerville as
well as distributed exclusively throughout Massachusetts. To celebrate the release, on Tuesday

September 3rd, Aeronaut and Mass Audubon will co-host an evening of programming, including a birds of
prey meet-and-greet followed by a bird-themed trivia night. Find out more about this event here:
https://www.facebook.com/events/479245789322911/

There are many ways you can get involved with Mass Audubon to help them protect the nature of
Massachusetts for people and for wildlife. Learn more here: https://www.massaudubon.org/.