The Biggest and Fastest Growing Massachusetts Breweries In 2019 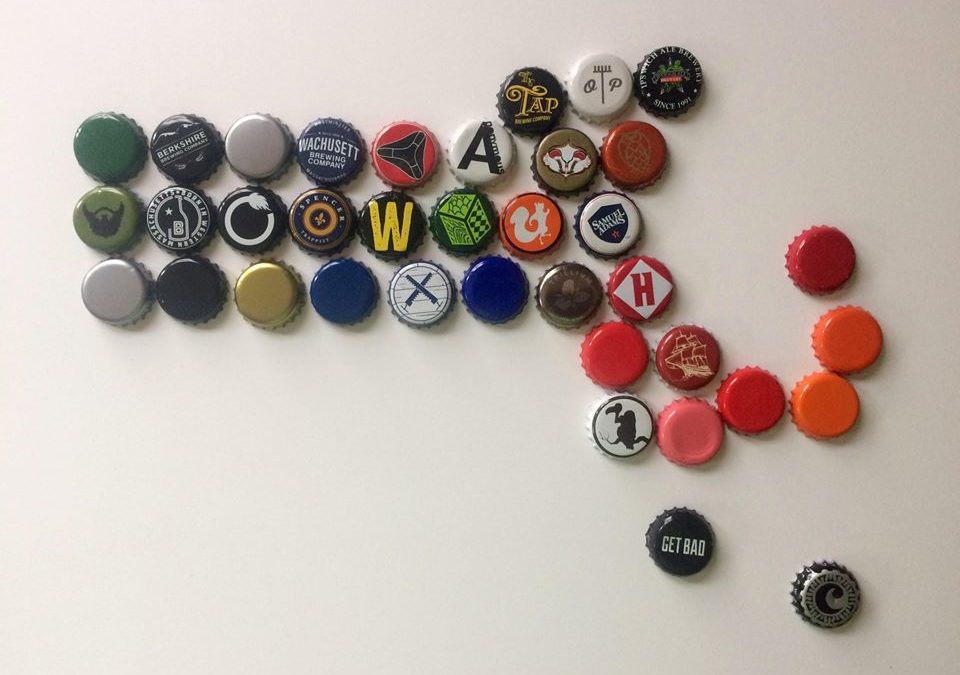 The Brewers Association (BA) recently published its annual industry review issue, an examination of the previous year’s production numbers for the nation’s more than 8,000 independent craft brewers. Of note was that most of the largest and so-called regional breweries (those who produce 15,000 barrels or more annually) eked out growth in 2019. As has been the pattern for the last several years, the Bay State’s biggest breweries fared better than most – even amidst continued stiffening competition. The industry publication Brewbound noted that Massachusetts continues to be a hub of craft growth, with five of its regional brewers recording strong double-digit growth. As the charts below reflect, many of the Commonwealth’s micro breweries posted even stronger numbers.

Note that Boston Beer, better known by craft drinkers as Sam Adams, is not listed on our chart of the largest local breweries because it brews less than one percent of its beer in Boston. According to an employee at the brewery, its Boston headquarters only produces beer for festivals, exclusive local draft accounts, and tour & taproom consumption. The rest is brewed at its large scale breweries in Pennsylvania and Ohio.

Similarly, Nantucket based Cisco Brewers is not charted because it produced the bulk of its beer at the Craft Brew Alliance (CBA) facility in Portsmouth, New Hampshire. The brand and its distribution is fully owned by CBA, who was purchased by AB-InBev last fall and therefore no longer meets the BA’s definition of a craft brewer. Small scale brewing operations on the island brewery, which Cisco retained in the deal, is reported separately and still considered craft by the BA. That total was less than 1,000 barrels in 2019.

Harpoon, who topped the Massachusetts list and ranks as the 17th largest brewer nationally, produced almost three quarters of its nearly 175,000 barrels at its South Boston brewery (that number includes its Arctic Summer hard seltzer, produced in Worcester). The rest was brewed at its second facility in Vermont. As with several of the country’s largest and oldest breweries, their production was down slightly for 2019. 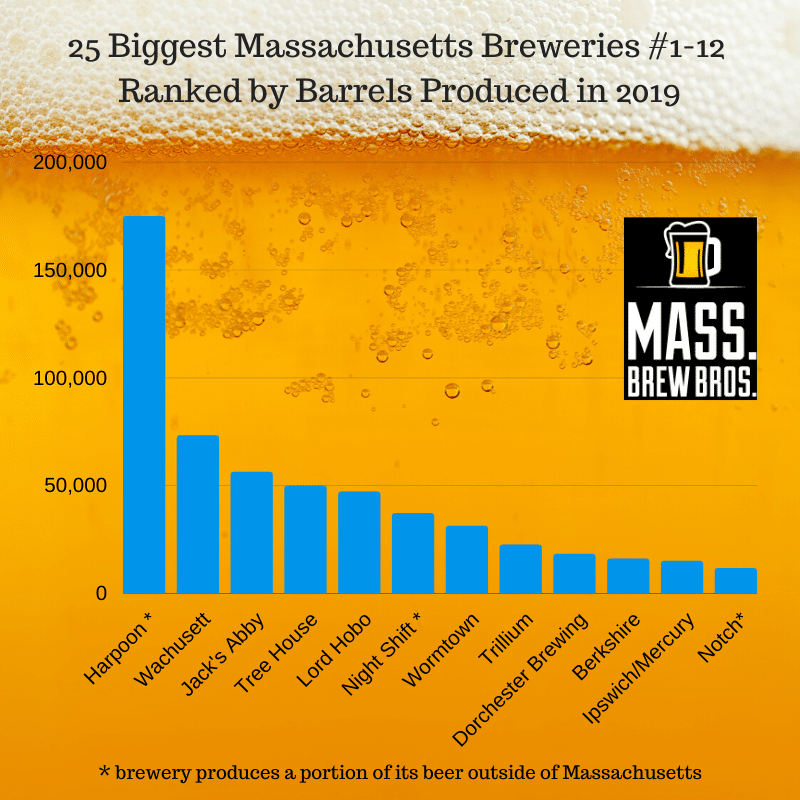 Figures in this chart are based on BA estimates and state tax records. In most instances they’re confirmed by the brewery.

Let’s start with some insight and analysis on the brewers charted above, all but the last two of which qualify as regional breweries. The only other Massachusetts brewery among the biggest 50 nationally, Wachusett Brewing, was up 5% for 2019, an impressive feat for a large and mature brand. They also announced plans to open a pair of satellite breweries in Worcester and Cambridge. Just behind them is Jack’s Abby/Springdale, who grew another 15% and came up just short of making the aforementioned national biggest 50 list. Similarly, Tree House rose another 16% to nearly 50,000 barrels and is also knocking in the door.* And they again sold all their beer directly to the consumer and remain the largest brewery in the nation to rely solely on the taproom model. In other words, without any distribution.

Three others, Lord Hobo (up 25%), Night Shift (up 21%) and Wormtown (up 27%) all continued their ascents. They were outdone only by Trillium, who bounced back after a retraction last year to post an impressive 32% increase. All four have either added new locations, Wormtown at Patriot Place and Trillium in Boston’s Fenway neighborhood, or announced plans to do so in 2020. Just last week, however, Night Shift abandoned its expansion plans for Philadelphia. No word on any change of plans has come from Lord Hobo.

Two of the final three positions are occupied by legacy or mature brands, which like Harpoon have struggled to keep pace with newer and newish brands in recent years. Ipswich Ale Brewery, which includes its contract brewing arm Mercury Brewing, bounced back a bit after a tough 2018, while Berkshire Brewing didn’t fare as well, dipping 11%. Partner brewing outfit Dorchester Brewing Company was down slightly. Have a look at the below chart of the state’s largest micro breweries and then scroll down for further analysis. 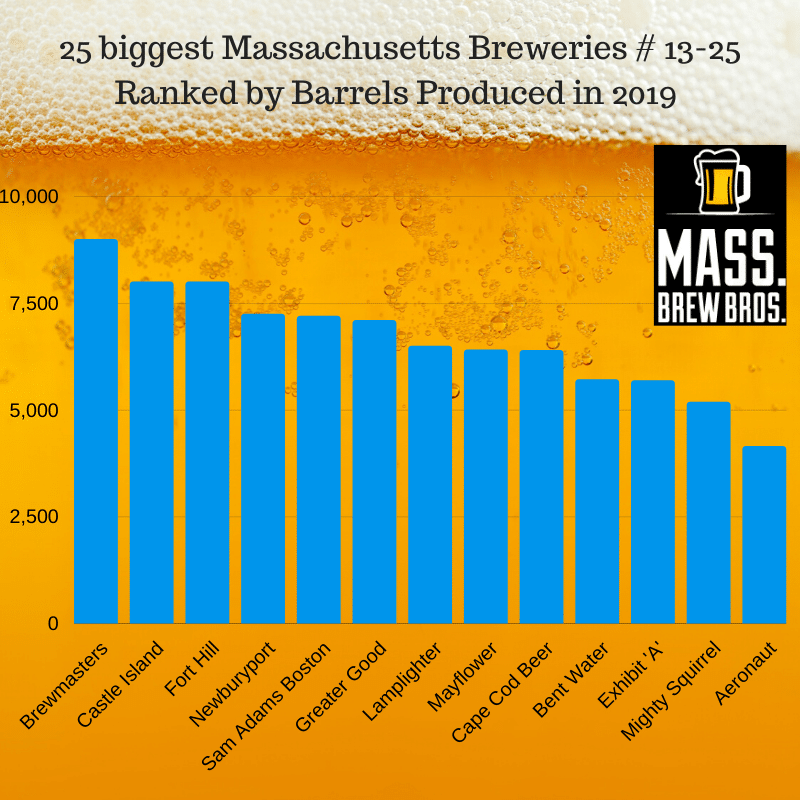 Figures in this chart are based on BA estimates and state tax records. In most instances they’re confirmed by the brewery.

Among the familiar micro breweries maintaining spots in the top 25 this year are Norwood’s Castle Island Brewing (up 7%), Easthampton’s Fort Hill (up 6%). Plymouth’s Mayflower Brewing (up 5%), and the Sam Adams R & D brewery in Jamaica Plain, up a few percentage points. Barnstable-based Cape Cod Beer was essentially flat for 2019, and Newburyport Brewing, despite announcing plans to open a pilot brewery and taproom in Boston, continued its slide ending the year down some 24%.

Among the state’s fastest growing micro breweries again in 2019 were Lamplighter Brewing in Cambridge, who tacked on another 16% in growth, Lynn’s Bent Water Brewing and Somerville’s Aeronaut Brewing, both of whom increased production for the third year in a row, and production outfit Brewmasters Brewing Services, who produces a number of well-known local contract brands and was up a whopping 50%. Not to be outdone, Framingham’s Exhibit ‘A’ Brewing boasted an impressive 58% jump in growth.

Fast-rising Greater Good Imperial Brewing in Worcester, which after topping all Bay State breweries with an astonishing 400% increase in growth last year, tacked on another 67%. The only brewery to outpace them this time around was Mighty Squirrel, which after a full year of brewing at its own brick and mortar space in Waltham, skyrocketed more than 200% in production. Even more imposing, all 5,186 barrels of their beer was sold right here in the Commonwealth.

In all, 638,000 barrels of commercial beer was brewed in Massachusetts during 2019, just 9,000 more than last year. That means that while the industry is growing modestly, competition among the state’s breweries continues to sharpen. Said another way, many of the notable gains mentioned above likely came at the expense of other Massachusetts breweries – not everyone is growing. Harpoon accounted for 18% of all beer produced in the Bay State in 2019, Wachusett 11%, Jack’s Abby 8%, Lord Hobo 7%, Tree House 6%, and the rest was divided among the state’s five remaining regional brewers (15%) and the 190 or so micro breweries (35%).

As we reported back in January, the Bay State added 29 new breweries, 9 others added taprooms, and 3 more completed major expansions. But 2019 also saw an all-time high of 12 closures. So far 10 new breweries have debuted and four have shut down in 2020, raising the state’s total to just over 200.

If you have thoughts, observations, or questions on the data presented here, hit us up in the “Submit A Comment” section below.

Breweries Worldwide Increasingly Ditching Plastic Can Carriers For Eco-Friendlier Ones

*In the original version of this blog post we reported that the BA estimated Tree House volumes as having declined 3% in 2019. Tree House co-founder Nathan Lanier later told Brewbound that his brewery finished last year up 16%, to 49,880 barrels. Our apologies for the initial misinformation.