12 Massachusetts Breweries Closed in 2019, An All-Time High: Here’s Who, and Why 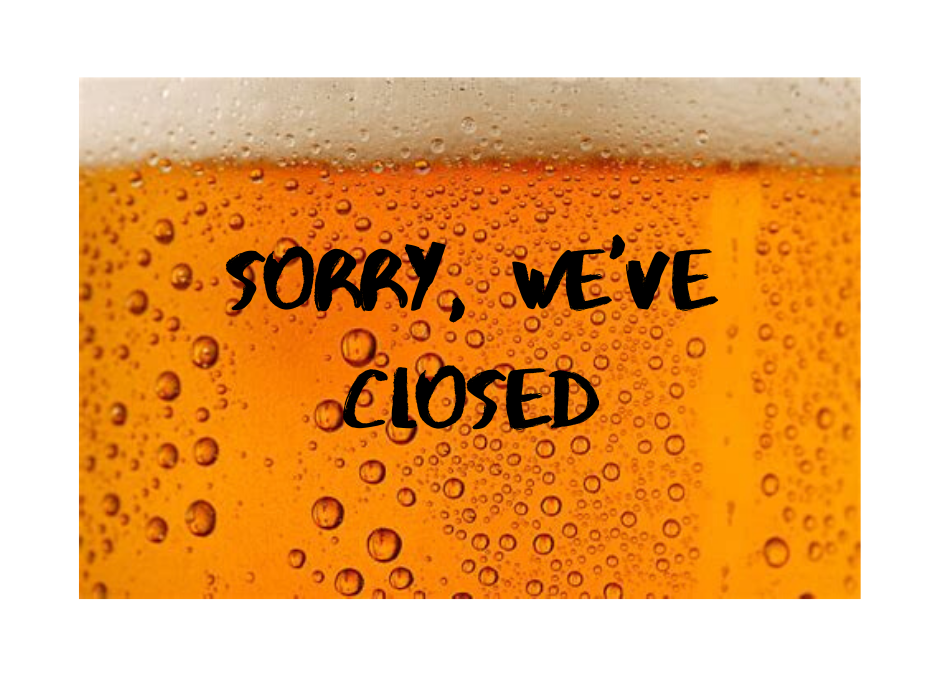 Like elsewhere, it’s been a topsy-turvy year for the craft beer industry here in Massachusetts. Another year of double digit openings was tempered by some high-profile closings, and accompanied by a fair amount of speculation as to whether there’s a bubble. We see it as more of a shakeout, and said as much in a blog post back in October. Time will tell. While no one has a crystal ball, it seems to us that each of the closings this year has its own story to tell. Taken collectively, it may seem like the craft beer industry is in trouble. Looked at individually, they seem to indicate that navigating in such an ultra-competitive market isn’t going to end well for SOME. All indications are that 2020 will continue the pattern of the last several years, with twice as many breweries opening than closing. Is your local brewery going to stick around for the long term? Here’s what we know about the 12 that didn’t this year.

Though neither location has actually shut down, both Boston Beer Works pubs, one next to Fenway Park and another near the TD Garden, ceased their on-premises brewing operations sometime around the end of 2018 or the beginning of 2019. The beer they serve there now is brewed and then trucked over from their Lowell and Framingham breweries. By definition, the two Boston locations are now just pubs that serve BEERWORKS Brewing Co. beers, so we’ve removed them from our official tally of Massachusetts breweries. As a legacy brand (the Fenway brewpub opened in 1992), their beer production numbers have steadily decreased over the last few years, so ownership likely came to the conclusion that brewing on site for each of the chain’s six locations was no longer necessary or profitable. The Salem pub also ceased brewing operations back in 2018, and the former brewhouse now serves as a barrel aging facility. Last we heard the Hingham brewpub was still brewing some of its own beer on site.

* After publication, we were made aware that the Lowell BEERWORKS location, while still brewing beer for three of the other pubs, closed its taproom some time ago. There is speculation that it may re-open, possibly as a restaurant, but ownership has not made any announcements.

The first of several shockwaves that reverberated though the local craft beer industry happened on March 29, when Greenfield’s beloved’s Lefty’s Brewing abruptly announced it would be closing after nine successful years in business. Its lengthy Facebook post didn’t share many specifics about the decision, but revealed that it didn’t appear to be financially motivated: “We do hope you respect our privacy at this time, but have no worries. We are very much looking forward to what’s to come for our family. Melissa [a cofounder] has also been experiencing health issues that encouraged our decision to take life by the bullhorns and live to the fullest. We are moving on to even more amazing things and entering a whole new chapter in this giant book that we call our lives.” 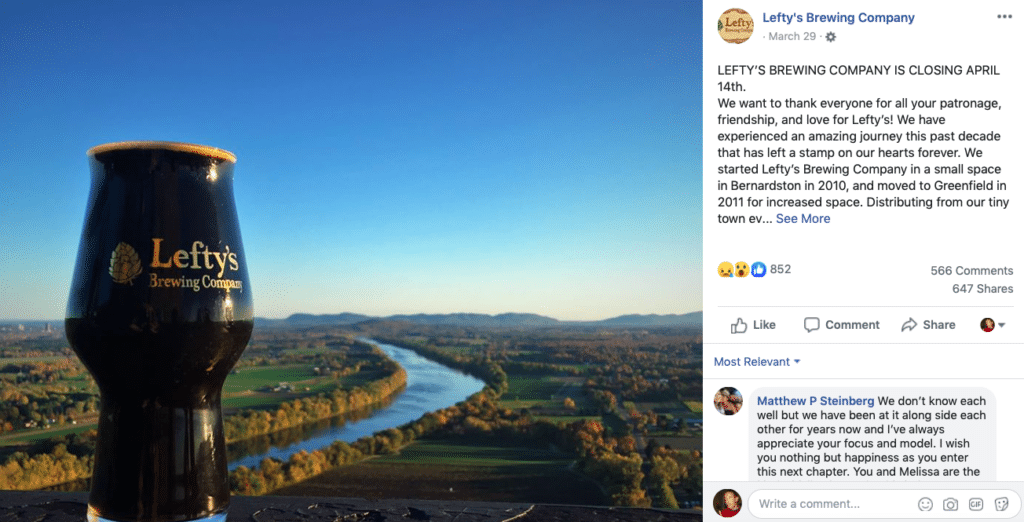 There hasn’t been an official announcement, but it appears that contract brand 3 Beards Beer Company has pulled the plug on its wholesale business that started back in 2010. There’s been no sign of life on any of its social media accounts for nearly a year, we didn’t see them on the festival circuit at all in 2019, and their Untappd check-ins have slowed to barely a trickle (likely just a limited amount of inventory remaining on liquor store shelves). We reached out to the current owners, former brand ambassadors who purchased the name and recipes from its original cofounders sometime in 2016, but never heard back. Though it’s purely speculation, three factors are likely to have contributed to the brand’s demise: (1) none of the owners were actually brewers themselves, (2) they only ever managed to produce five offerings, none of which was a NEIPA, and (3) their plans for a Boston area brewery & taproom of their own never came to fruition.

Over the summer Plymouth Beer Company had an unexpected and abrupt closure as the result of a disagreement between the head brewer and his landlord. The micro brewery opened in mid 2017 in a space adjacent to the Dirty Water Distillery in downtown Plymouth, brewing under the owner’s license. But disagreements on business issues, coupled with a lengthy delay in securing a pouring permit for a taproom ultimately led to departure of the brewer and his brand. After a brief closure, Dirty Water Distillery resumed brewing in the fall and re-opened the taproom for pints and flights. A new team of brewers, including owner Pepi Avizonis and his head distiller Brenton MacKechnie, are now manning the nano system’s brew kettle and intend to rebrand under the name LlamaNama Beer Labs.

An even more abrupt closure was that of Down the Road Beer Co. in Everett, which shuttered its doors in early August after its founder unexpectedly passed away. The brewery’s last Facebook post announced that it would be closed until further notice and that they look forward to serving patrons again in the future, but according to a story in the Everett Independent that seems quite unlikely due to its substantial debt. We’ve also learned that the brewery’s remaining owners and investors have been shopping the sizable brewhouse and its spacious taproom around to some of the state’s larger players or any other interested parties.

No doubt the biggest surprise of the year was the shocking announcement from revered Mystic Brewery in Chelsea, which at the end of September shared its intentions to wind down and discontinue brewing operations after eight successful years of “changing beer culture for the better in Boston and beyond.” Founder and brewer Bryan Greenhagen was publicly open about the reasons for the brewery’s closure, which included its challenging location, restrictive lease agreement, and exhaustion in navigating a fragmented and ever-changing market. Days after the initial announcement he laid it all out in a lengthy post on the Beer Advocate forum. A week later, he went into even more detail in a revealing interview with Jacqui Cain at Boston Magazine. The one silver lining was that Greenhagen intends to continue his less heralded Von Lune brand of lager beers in gypsy brewing fashion. No word yet on when or where the next batch will emerge. 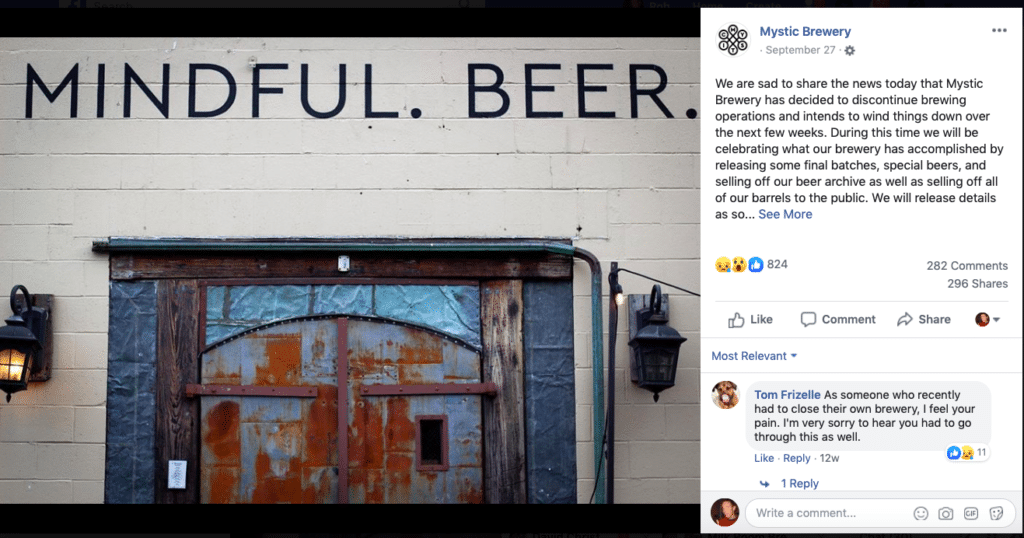 In early October Battle Road Brew House in Maynard closed quietly without any official announcement from ownership. Previously a contract brand, the original founders partnered with radio personality Greg Hill and Whole House hospitality group to open a spacious brewpub in the historic Mill and Main Clock Tower buildings in early 2017. It wasn’t long before both of the brand’s brewers had parted ways with the establishment, leaving some wondering whether there was any real commitment on the beer side of the business. Not long afterward, signs of the brewery’s demise were apparent when ownership “sought a strategic partner to assist in brewing operations before entering into an agreement with Wormtown Brewery,” according to a press release Wormtown put out in May. It was then that Wormtown took over the former Battle Road taproom at Patriot Place in Foxboro. It doesn’t appear there is any interest in continuing the contract brand either, as no Battle Road beer has been brewed by Wormtown since early summer.

A less noticed brewery closure we recently became aware of is that of Still River Brewery, a production nano brewer that operated in the Central Mass. town of Ayer and distributed to a dozen or so liquor stores and restaurants in Middlesex and Worcester Counties. Back in July, owner Bruce Stamski put the brewery up for sale, citing limited growth after five years in business and a desire to retire as the primary reasons for the sale. He doesn’t appear to have found any takers. We reached out to him recently to see what the brewery’s status was, but the website had been taken down and our email bounced back. Still River Brewery’s Untappd check-ins have grinded to a halt as well, presumably because Stamski has embarked on his retirement plans.

Another small Central Mass. brewery recently brewed its last batch as well. Krechman’s, formerly known as Kretschmann Brewing, in Webster has discontinued on-premises brewing because of what owner Brian Kretschmann described as pressure from the growing number of breweries and not enough money to justify brewing his own beer any longer. The business, now a pub cinema, craft bar, and beer garden, is alive and well with a full liquor license and “big plans moving forward” that Kretschmann says will allow them to succeed in the entertainment arm of the alcohol industry.

Just six months after debuting its commercial brewing business, Gloucester’s Agapé Brewing Community announced in a video on December 4th that its fledgling operation would be forced to abandon its plans for a taproom and therefore no longer be viable. The brewery was founded by Rev. Jamie Green Klopotoski and intended to be “a place to gather for freshly brewed beer, enjoy local music, evolve, and change the world.” But according to its founder, the city “inundated [the brewery] with rules, regulations, fees, red tape, bureaucracy, inconsistencies, nonsensical legalities, and delays” that caused her to fall into considerable debt. With no end to the licensing battles in sight, she recently brewed her last batch, a collaboration with Wandering Soul Brewing called City Politics. Meant to be a parting shot, the limited-release dark lager is only available on draft at select locations.

Official word came from Backlash Beer last week they have “quietly closed their taproom for good.” The unfortunate news brought the Massachusetts brewery closure total to an even dozen for 2019. The former contract brand that debuted its own brewery and taproom in Roxbury last September had been closed to the public for more than two weeks, with no word from its owners until the recent social media posts. Financial difficulties appear to be the culprit. As reported by the Boston Business Journal last year, the brewery buildout went over budget by a quarter of a million dollars and took a year longer than expected. It didn’t help that the brand had difficulty with its distributor for a significant stretch either. The final straw seems to have come just seven months after its opening when the landlord began advertising the 7,750 square foot space as available for lease within 60 days notice. The Backlash founders have remained private about the brewery’s business circumstances, but did share that they intend to continue producing beer under a contract brewing scenario.

If there’s a theme to be identified from the 2019 closures it might be complications related to the spaces in which many of them operated, or for some an inability to make the finances work to their satisfaction – perhaps even both. Regardless of broad themes, it’s clear that navigating the current beer market is fraught with potholes. And the rocky road may not be over for Massachusetts breweries as the new year approaches. The craft beer industry’s ultra-competitive landscape, coupled with projected openings of another 40-plus breweries in 2020, could very well make for another rough ride.