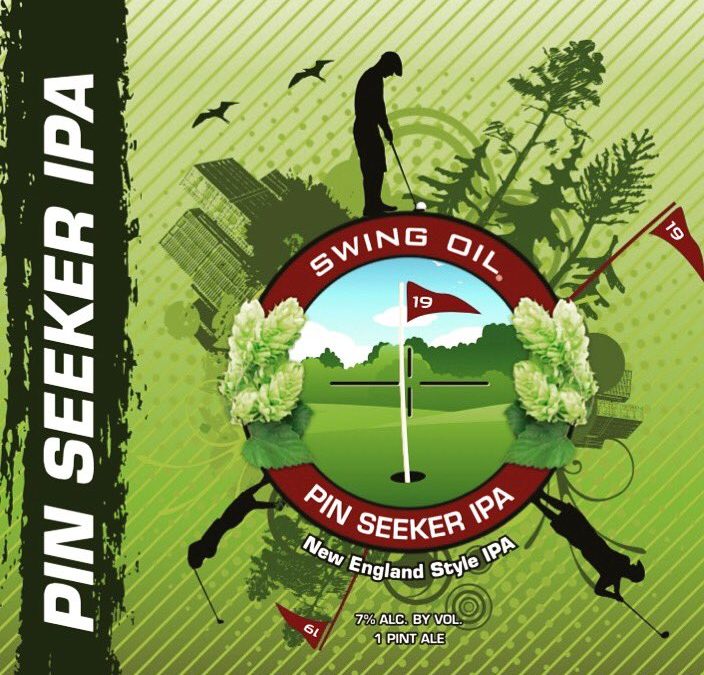 PRESS RELEASE / April 24, 2018 (Granby, MA) Swing Oil Beer Company is set to release Pin Seeker, a New England-style IPA, to the Massachusetts market. Hazy, juicy and 7% ABV, it’s made with American-sourced hops to create a drinkable beer with a soft, rich mouthfeel and tropical fruit notes. It will be available this Thursday, May 7th on draft and in 4-packs of 16-ounce cans at craft beers stores such as Table and Vine in West Springfield, Julio’s Liquors in Westborough, and several Sperry’s locations throughout Central Mass. and the Metro West.

A launch party will be held Thursday at 7:00 at Smith’s Billiard’s in Springfield, host to The Worthy, a popular craft beer showcase, being held this year in June 16th. In addition to having the first keg of Pinseeker IPA on draft, their will be a Wii Long Drive Competition featuring prizes for golf enthusiasts eager to get their swing back after a long winter.

Swing Oil Beer Company is dedicated to improving the game of golf by pushing the boundaries of brewing through fearlessness and innovation. Our goal is to create flavorful craft beers to be enjoyed by golf, sports, and craft beer fans everywhere.

The idea started between two friends, Tommy and Mike who golf and brew beer together a lot. While trading stories at their favorite 19th hole, they decided that the term Swing Oil should not only be the consumption of beer to improve performance on the golf course (i.e. to cure common golfing errors – slicing, hooking, whiffing, etc) but also the name of an American craft beer brand to be enjoyed in sports bars, restaurants, on the golf course, and in the 19th hole. From that day, Swing Oil Beer Company was born, and is committed to serving the most desired line up of craft beers to every golfer, sports fan, and craft beer enthusiast.