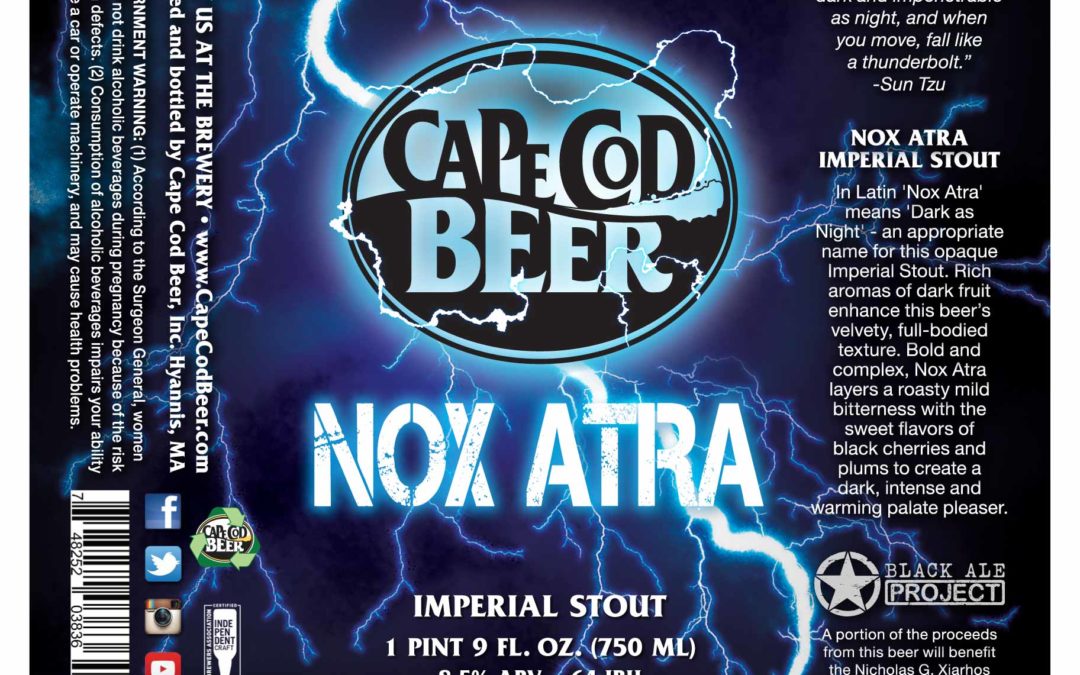 PRESS RELEASE / January 3, 2018 (Hyannis) Cape Cod Beer introduces Nox Atra – an Imperial Stout with a weighty ABV of 8.5% – brewed and packaged on-site at the Hyannis brewery. A release party the night of Friday, January 26th will introduce the velvety and intense stout at the brewery for tastings and pints as well as 750 ml. bottles. As part of the “Black Ale Project” a portion of the proceeds from the sale of Nox Atra beer and T-shirts will benefit the Nicholas G. Xiarhos Memorial Foundation Fund which is designed to support wounded warriors and their families, local military families and more than a dozen ongoing community programs.

ABOUT THE RELEASE PARTY

The release party will be held at Cape Cod Beer in Hyannis on Friday, January 26 admission is a $20 donation to the Nicholas G. Xiarhos Memorial Foundation Fund. The night will feature live music from Reckless Abandon with Dick Fiscus, food and a cash bar will also be available.

ABOUT THE BLACK ALE PROJECT

Nox Atra Imperial Stout is part of the Black Ale Project (www.BlackAleProject.org). Dreamed up by Dave Pappas – a former active duty Marine & non-combat veteran of the Persian Gulf War turned craft beer blogger – the idea is simple. “Buy a beer, help a veteran.” There are two simple guidelines for participation: 1) brew a dark beer and 2) donate a portion of the proceeds to a veterans organization. Cape Cod Beer quickly decided to participate in the Black Ale Project and made the decision to partner with a local veteran’s organization reaching out to Cape Codders in need. With that goal in mind, the Nicholas G. Xiarhos Memorial Foundation Fund was designated Cape Cod Beer’s beneficiary for this project.

Nicholas G. Xiarhos was the first child of Yarmouth Police Department Deputy Chief of Police Steven G. Xiarhos & Lisa Xiarhos & the beloved big brother of three siblings. He graduated from D-Y High School in 2006. His family, friends, teachers & coaches remember him as a kind-hearted, selfless person who went out of his way to help others. He was affectionately nicknamed “The Mayor of DY” due to his outgoing personality and his ability to get along with everyone. In their senior year, his classmates presented him with the title “Does Most for Others.” In just 3 years as a Marine, Nick earned the title of corporal as well as 11 meritorious citations, ribbons & medals. He died on the battlefield on
July 23, 2009 while going to the rescue of his fellow Marines in combat. Nicholas chose to make a difference in the world. Two weeks prior to his death, his last words to his mother were, “Don’t worry about me Mom… I’m living the dream.” His short life was not without purpose and he fulfilled his dream of serving his country. The Xiarhos Family created a fund in honor of Nick. The Nicholas G. Xiarhos Memorial Foundation Fund is designed to support local military families in need of financial assistance, wounded warriors and their families. In addition to assisting these military families, the fund also provides support to over a dozen ongoing community programs. CLICK HERE to donate directly to the Nicholas G. Xiarhos Memorial Foundation Fund.

We have a maximum annual capacity of approximately 12,000 barrels.  We brew on average 8-10 times a week during the high season, and about half that during the off season.

We self distribute our products within approximately 50 miles of the brewery – from Plymouth to Provincetown. In total we have about 500 accounts that carry our beer, roughly 350 bars or restaurants and another 150 or so package store/liquor stores that carry our beer. You can find Cape Cod Beer near you by checking out our beer finder!