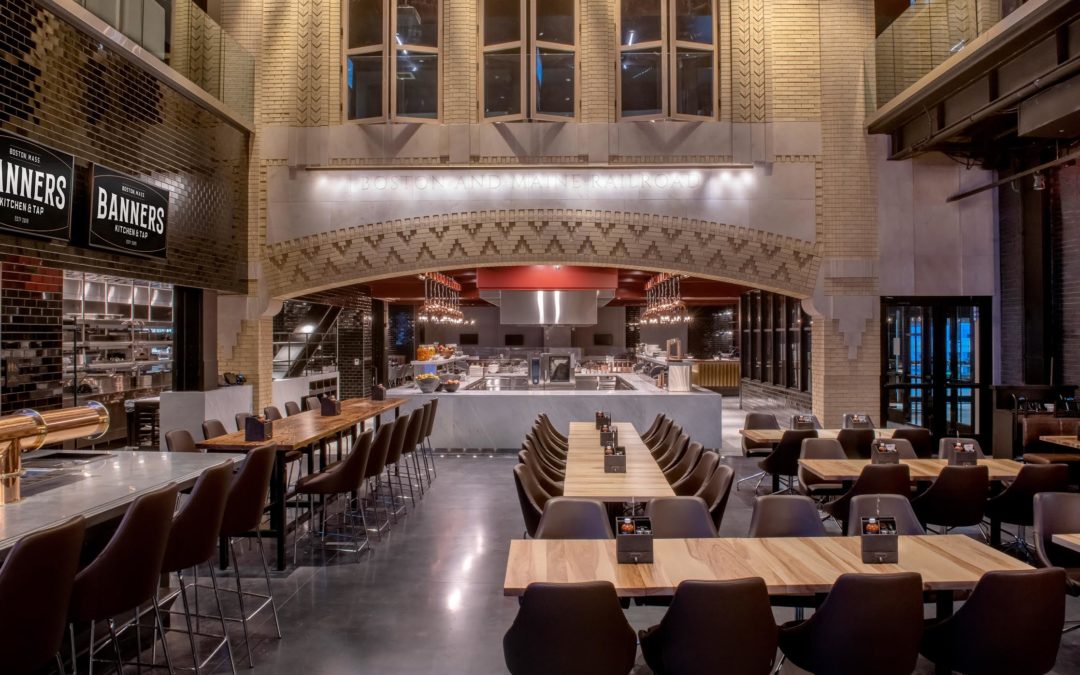 This new immersive sports bar will open its doors at The Hub on Causeway, the joint-venture development by Delaware North and Boston Properties located in the heart of Boston sports, on the former site of the Boston Garden and adjacent to the TD Garden and North Station. Banners is named in honor of the Bruins and Celtics championship banners raised to the rafters over the last several decades.

Banners’ guests can enjoy crowd favorites like Banners Chicken Wings, Clothesline Smoked Bacon and BBQ Chili Nachos, and diverse salad and bowl selections like the Chopped O.G. Salad and the Sweet Potato “Noodle” Bowl, to name a few. For guests with big appetites, Banners’ sandwiches, burgers and plates such as the Fat Rooster Fried Chicken Sandwich, NE IPA Battered Fish & Chips and the Double Stack Burger will satisfy any craving. Banners will also add a four-day brunch program to its sports bar atmosphere in the coming months.

Banners will also feature an eclectic beverage program designed by acclaimed bar director Jackson Cannon. Cannon’s take on classic cocktails at some of the best restaurants in Boston (Eastern Standard Kitchen & Drinks, The Hawthorne, Island Creek Oyster Bar) has earned him national and international recognition. Banners is raising the bar with familiar favorites like Espresso Martinis and Moscow Mules that have been elevated with the best ingredients and creative preparations. The menu is built for scale, with a few cocktails on draft – the “Champions Cup,” made with vodka, coconut, lime, banana and bubbly, and “Legends Way,” consisting of bourbon, vermouth, cynar and campari – in addition to providing a selection of large-format cocktails. Cannon has also integrated high-end brands of whiskey that he personally selected with the Banners management team in Kentucky this summer to add to the impressive spirits collection.

Beyond the spirits selection, beer lovers will find Banners to be their new spot for testing local and regional craft beers. Banners has 60 rotating tap lines installed and maintained by Modern Draught, a South Boston-based draft beer system company, making Banners’ beer list one of the largest in Boston. Banners will also be integrated with Untappd, the geosocial networking service and mobile app that allows its users to check what’s on tap in real time, rate beers and further connect with the craft beer community.

Paying homage to the Blades and Boards Club that resided in the Boston Garden from the 1970s to the 1990s is the revitalized Blades & Boards VIP dining experience within Banners Kitchen & Tap. With a steakhouse atmosphere and high-end menu, this reservation-only luxury dining option includes decadent offerings like the Iced Shellfish Tower, Daily Catch A La Plancha, Green Circle Farms Roasted Half Chicken and the 28-Day Dry-Aged Boneless Prime Rib.

In addition to its culinary and beverage appeal, the multilevel restaurant and bar offers patrons the ultimate sports and entertainment destination. With their “Dream Screen,” attendees will watch Boston’s favorite sports teams on a 39.5-foot diagonal LED television, the largest on-screen sports viewing experience in the city of Boston. Throughout Banners, 13 additional “TV tickers” screens and five “banners” with live game scores and stats will be easily accessible for an alternative viewing experience.

“We wanted to create an environment that’s fun, high energy and engaging, but with thoughtful choices that make it appealing to neighborhood residents, commuters, families, and both sports fans and non-sports fans alike,” said Don Bailey, director of operations for Patina Restaurant Group in Boston. “It would have been easy to make Banners a standard sports bar – we have the location and audience where that would be a great success – but every choice we made in this process was done to simultaneously pay homage to the ground where we are built, while also raising expectations for the guest experience.”

Patina Restaurant Group is a bicoastal collection of over 60 boutique restaurants, catering and food service operations in the premium segment of the hospitality industry. The group is known for its unique and impeccable market-driven menus, exemplary service culture and outstanding beverage program across all locations. It offers distinctive, one-of-a-kind dining destinations in celebrated cultural institutions. The company has locations in New York, California, Massachusetts, New Jersey and Florida.

On the West Coast, the portfolio includes the iconic four-star Patina Restaurant at the Walt Disney Concert Hall, Nick + Stef’s Steakhouse, Maple at Descanso Gardens, Leatherby’s Café Rouge at the Segerstrom Center for the Arts, Kendall’s Brasserie and The Boardroom at the Los Angeles Music Center, Ray’s | Stark Bar at the Los Angeles County Museum of Art (LACMA), and a world-class catering division, Patina Catering, servicing high-profile events across L.A.

About Delaware North
Delaware North is one of the largest privately held hospitality companies in the world. Founded in 1915 and owned by the Jacobs family for more than 100 years, Delaware North has global operations at high-profile places such as sports and entertainment venues, national and state parks, destination resorts and restaurants, airports, and regional casinos. Our 55,000 employee associates are dedicated to creating special experiences one guest at a time in serving more than a half-billion guests annually. Delaware North operates in the sports, travel hospitality, restaurant and catering, parks, resorts, gaming, and specialty retail industries and has annual revenue of over $3 billion. Learn more about Delaware North at www.DelawareNorth.com.