A sweet treat from Harpoon & Mike’s Pastry on 2/1 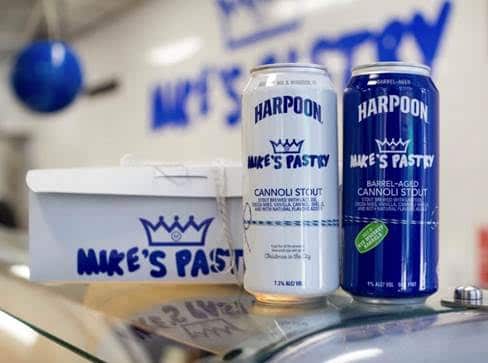 PRESS RELEASE / January 26, 2022 (Boston, MA) – Boston’s iconic foodie collaboration has returned for the third year in a row, offering a sweet treat for beer and cannoli lovers alike! Harpoon Brewery and Mike’s Pastry are at it again with the following limited releases:

As February is National Cancer Awareness Month, for every case of beer sold Harpoon will donate a portion of proceeds to Real Men Wear Pink, an American Cancer Society-affiliated organization.

To celebrate the launch, fans are invited to visit the Harpoon Beer Hall on February 1st between 3-9pm. Every guest that buys a 4-pack of the regular or Barrel-Aged Cannoli Stout will receive two accompanying Mike’s cannolis. Every guest that buys a draft pour of either stout from the bar will receive one cannoli from Mike’s. For those with an extra sweet tooth, additional cannolis will be available for purchase (while supplies last).

*Available for while supplies last

Founded in 1946, Mike’s Pastry is located in Boston’s historic North End on Hanover Street. Michael Mercogliano (the “Mike” behind the famed Mike’s Pastry) created the one-of-a-kind cannoli that keeps loyal Bostonians and tourists coming from around the world to enjoy. Mercogliano presided over the bakery since 1946 and handed the operation off to his stepson, Angelo Papa, who has been running the bakery for years now.