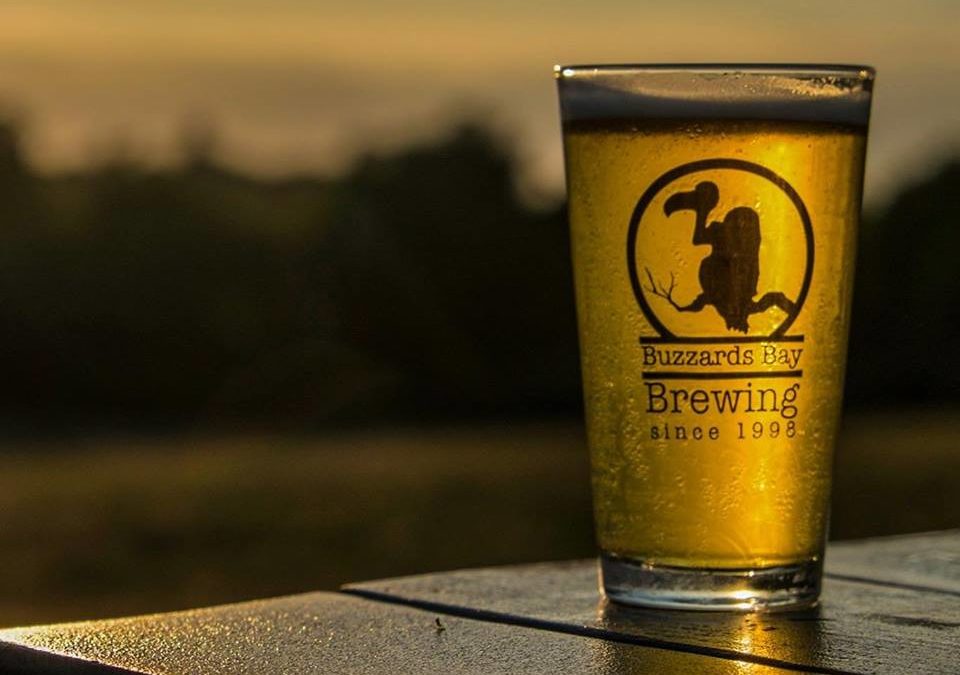 Now that summer has officially arrived, and patio beer season along with it, we figured it was a good time to revisit one of our most popular blogs: Massachusetts Breweries With Awesome Outdoor Drinking Spots. With more and more breweries offering beer gardens, patios, and decks, this year’s edition is bigger and better than ever. The Southeast alone has well over a dozen outdoor drinking spots where you can enjoy a refreshing Berliner Weiss or a thirst-quenching Kolsch right from the source. Here’s a rundown.

The original Cape & Islands brewery, Cisco Brewers is still THE place to be for afternoon drinks on Nantucket. And it’s not just for beer geeks: along with the brewery you’ll find both a winery and a distillery that also have their own tasting rooms. Located just 15 minutes from down town, thirsty visitors can bike over to the grounds or take the free shuttle. Once there, plan to stay a while. Along with a variety of drinks and open air seating, they offer tours, host live music, entice you with a raw bar, and have a variety of resident food trucks. If there’s one shortcoming, it’s that they close too early, usually by 7:00.

Modeled after a Napa Valley winery tasting room, Bad Martha’s Farm Brewery captures the essence of island life, but with much better beer. In addition to a dozen or so brews, they also serve cheese plates and charcuterie boards, as well as other snacks. Outdoor games and live music on weekends adds to what they describe as a “chill brewery vibe.” It’s in Edgartown, so you’ll need transportation if you’re taking the ferry over for a day trip. Open seven days a week from noon to 9:00, you can Get Bad between Memorial Day and Labor Day. 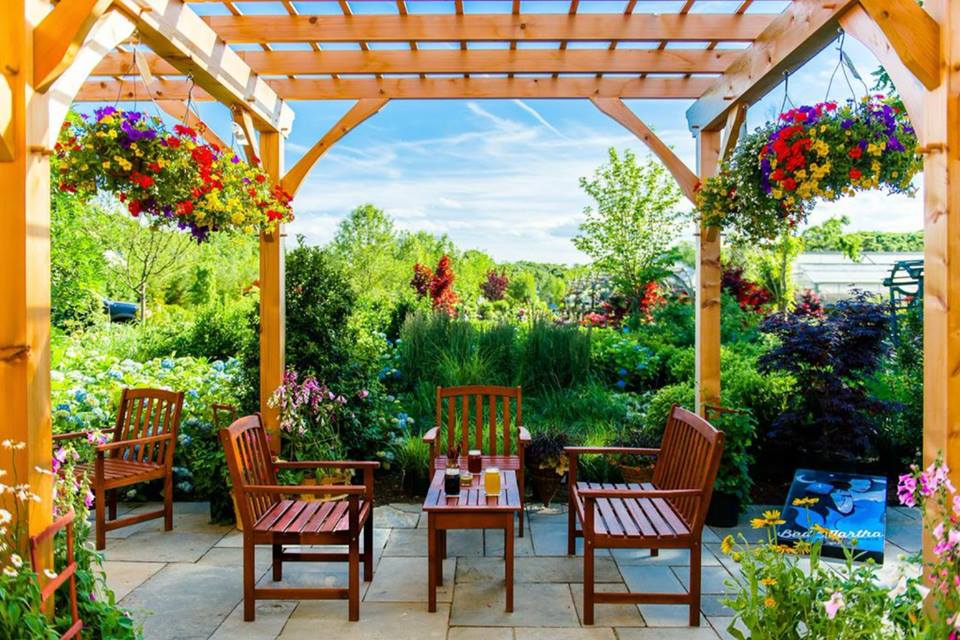 If you’re looking for lunch or dinner on the island, head to Oak Bluffs where brewpub Offshore Ale Co., the island’s original brewer, will accommodate you on their cozy, shaded patio. Try the Hop Goddess, a hoppy ale first brewed by Matt Steinberg (now at Exhibit ‘A’ in Framingham) and still a local favorite. They’re open for lunch everyday and host live jazz on Tuesday evenings starting at 6:30.

If you’re heading over the bridge this summer but won’t make it out to the islands, be sure to check out Cape Cod Beer in Hyannis. Work on your tan in their beer garden and enjoy a pour from the beer trailer as you listen to a local musician and snack on one of their Cape Cod Dawgs or something a guest food vendor is serving. Healthy eaters should plan to visit on a Friday when they host a local farmers market from 3:00 to 6:00.

Another Hyannis stop you’ll want to make is at Barnstable Brewing, a family-run brewery and taproom that opened last summer and has quickly grown a fan base. Their tasty New England style IPAs and a Krisstallweissbier that’s a perfect summer quencher are just a few of the reasons why. As part of a recent expansion they’ve extended their hours, opened a beer garden out back, and started inviting food trucks on weekends.

Another new beer garden on the Cape is that of former contract brand Naukabout, who earlier this year opened a brewery of its own in Mashpee. Located on an iconic property with views of both Lake Wakeby and the Mashpee River, it’s the perfect spot for what the co-founders’ father described as “nauking about,” or doing the thing you love to do after a hard day’s work. Having a few tasty brews while relaxing in a scenic Cape Cod beer garden sounds about right. 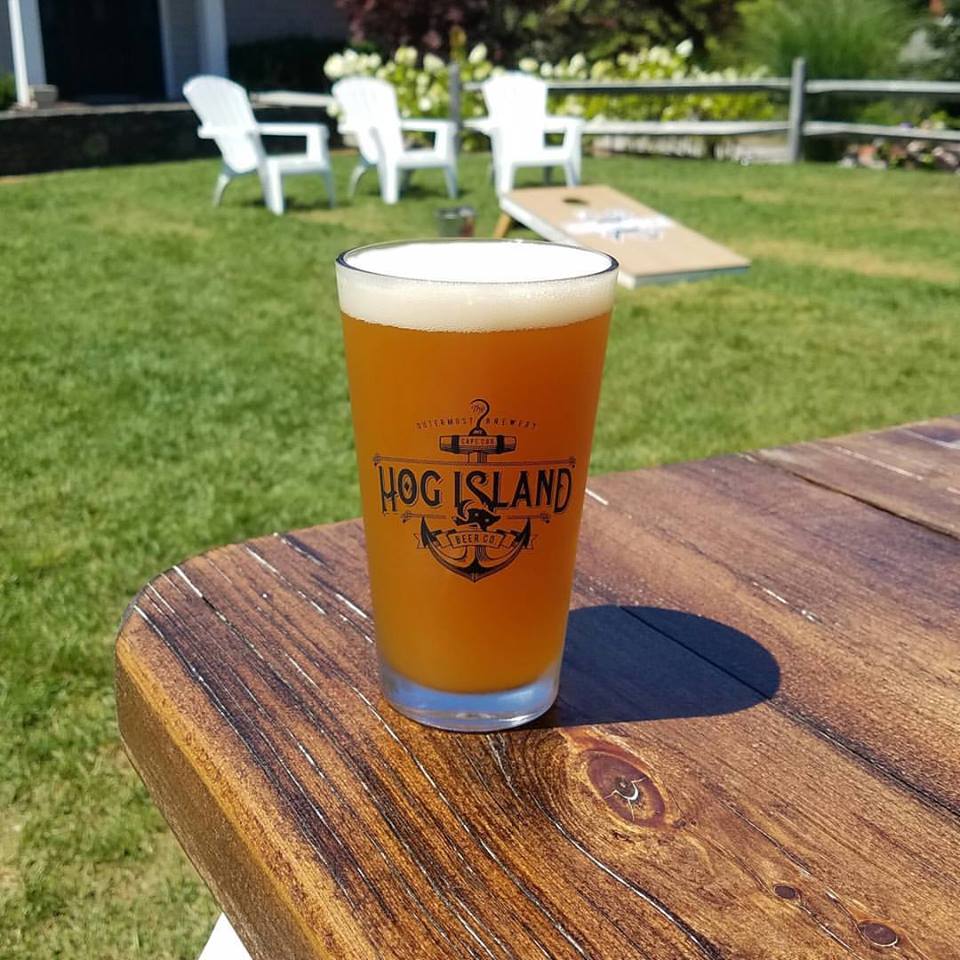 Located in Orleans, and not far from Nauset and Coast Guard Beaches, Hog Island Beer is a Lower Cape hot spot for enjoying outdoor brews.

A great option if you’re on the Lower Cape is Hog Island Beer, adored by locals. Billed as the Cape’s outermost brewery, you can park yourself in one of their comfy cape chairs out in the beer garden and enjoy a few brews before having dinner at their sister restaurant, Jailhouse Tavern. They also host live entertainment 7 days a week during the summer.

There’s plenty of off-Cape action in the Southeast as well, just ask craft beer drinkers in the SouthCoast area who’ve been flocking to one of the region’s oldest breweries, Buzzard’s Bay Brewing, for years. Nestled between Horseneck Beach and a 150-acre working farm in Westport, their sizable outdoor space has corn hole, picnic tables, raw bar, food trucks, and live music. A large tent keeps the rain off your head and fire pits warm you up on cool evenings, so there’s literally no raining on this craft beer parade. 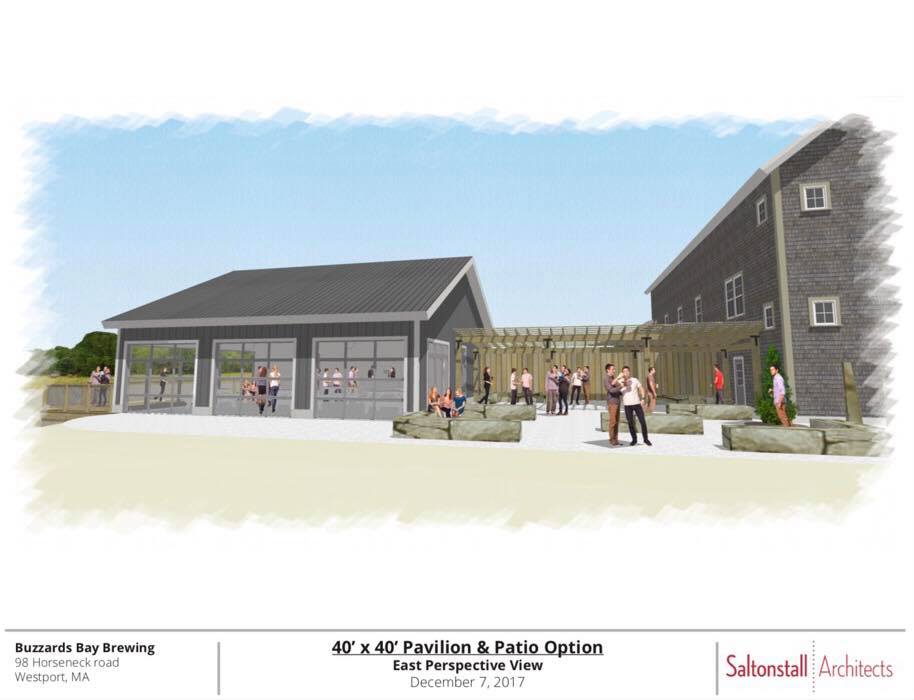 Rendering of the new beer barn and patio space that Buzzards Bay Brewing plans to debut in September.

If you’re in the Fall River area this summer and looking for brews with a water view, head to Canned Heat Craft Beer in Fall River, who looks to be opening very soon. Their brewery and its 600-square foot patio are located in an active boat yard with views of the Braga Bridge and the Borden Lighthouse, where patrons can watch boats navigate the bay while enjoying a hoppy Ale or Caribbean style Lager.

If you’re traveling north along Route 3 plan a stop in Plymouth, where a pair of breweries will accommodate you for outdoor beers. Independent Fermentations has a picnic table space and regularly hosts events like the upcoming Gravel Grinder Bike Ride on July 8. Across town, newbie Second Wind Brewing recently opened its taproom, and a beer garden to go with it. The standing-room space is family and dog friendly, accommodates about 40 thirsty visitors, and frequently invites a food pop-up so you can munch on something tasty while enjoying your beers.

Continue further along the coast and you’ll find newish Untold Brewing in Scituate, who recently adopted a new pet friendly policy for its patio, has extended its hours for the summer, and features mouthwatering pop-ups like Sarcastic Swine BBQ or the Farms to Forks food truck.

Later this week Stellwagen Beer Company in nearby Marshfield will also be an option for al fresco beers. They plan to open their doors in the next week or so (keep an eye on their Facebook page). Once they do, you’ll be able to grab your brew and head for the grassy knoll outback which offers seating and lawn games. If you’re the impatient type, stop by the brewery for a sneak peek on Tuesday when they release their tasty NE IPA, Invisible Airwaves, in 16-ounce cans.

Another solid option for open-air brews on the South Shore is Barrel House Z in Weymouth. If you’re thinking barrel-aged beers don’t scream summer, know that they’ve expanded their horizons quite a bit since opening a year ago. Among the warm weather beers they’ve currently got on tap are the Sunny & 79º Ginned Pilsner, the Weymouth 400 Kölsch, and their rotating IPA series, Bamboozled By Hops. They’ve also got food, Adirondack chairs in the beer garden, and competitive corn hole. Now that screams summer.

Across town and straddling the border with its neighboring town you’ll find one of the six Beer Works locations, this one in the Hingham Shipyard. The longtime brewpub has a spacious patio that boasts views of the water where you can grab a bite to eat and wash it down with a Watermelon Ale, one of their summer favorites.

You can find another brewery patio worth visiting if you turn away from the coast and head to Bridgewater, home to Black Hat Brew Works and its roomy patio. Enjoy some brews and food truck eats with friends at the picnic tables, or a pull up a comfy, cushioned seat on the sectional at the quiet end of the space to kick back and relax. Now that they’re canning, you can even take some of their underrated brews home.

If you’re not ready to call it a day just yet then consider heading to nearby in Brockton, where Shovel Town Brewery will will be part of a new pop-up entertainment venue and beer garden this summer. Located at 121 Main Street in downtown, PROVA Brockton will celebrate the city’s heritage with craft beer, local food, family fun, and entertainment. 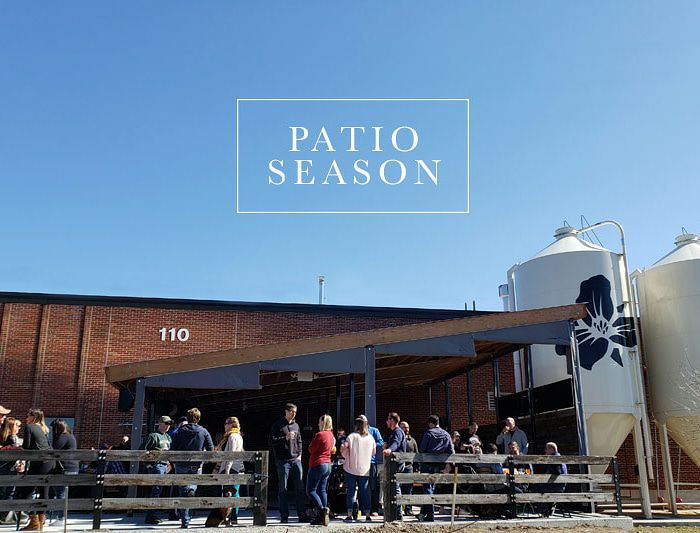 A visit to Trillium’s Canton brewery now includes the possibility of relaxing with a few patio beers.

Last but not least, another inland trip you’ll definitely want to make this summer is to Canton for an afternoon at Trillium’s new outdoor space. In addition to the highly heralded tap list they’re known for, they now have a spacious, covered terrace where you can relax and savor your favorites. It’s family and dog friendly, has plenty of standing room for drinking, and communal seating where you can enjoy a bite from the all-star lineup of food trucks they’ve got scheduled for coming weeks.