Why Not Us? The Case for Massachusetts as the Best Beer State in America 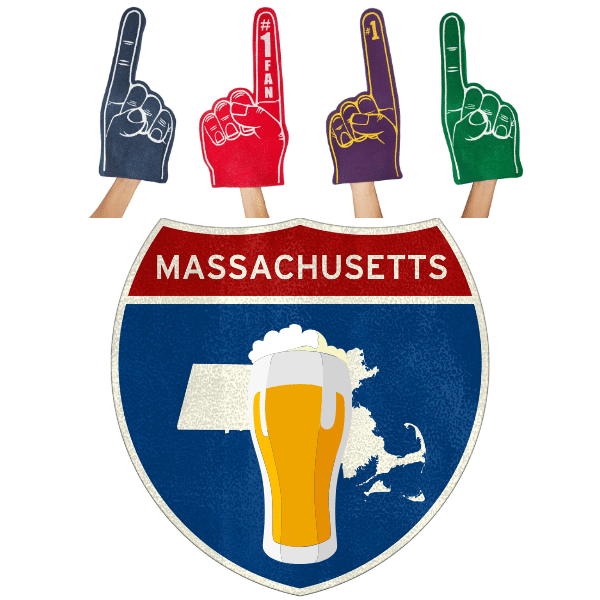 Among the facts and figures we like to track while keeping tabs on the Bay State’s craft beer scene is the amount of beer annually produced by various breweries. Last month, while verifying production numbers for that blog post, The Biggest and Fastest Growing Massachusetts Breweries, Wormtown Managing Partner David Fields confirmed his brewery’s 10th consecutive year of double-digit growth while emphatically adding that the positive performance of the state as a whole was even more impressive. “Ive been touting this for a few years now,” he said via email, “but I believe the consistent growth numbers we’ve put up [over the last several years] are reason for Massachusetts to lay claim as the new craft beer capital of the country.” That got us wondering if even we’ve been taking the amazing breweries we enjoy here in the Commonwealth for granted. We more than hold our own against California, Colorado, Michigan, the Pacific Northwest. Why not us? Love him or hate him, infamous Red Sox pitcher Curt Schilling had the audacity to pose the question back in 2004, and we all know what happened that year. So in the same vain, here’s why we think Fields’ audacious claim that We’re Number 1 just might be credible.

Let’s start with the obvious: Tree House and Trillium. With their highly-sought, brewery-exclusive beers, you’d be hard pressed to find a craft beer aficionado anywhere that hasn’t heard about Tree House and Trillium. And for good reason; they’ve been on virtually every list of “best breweries” that’s been published in the last five years. Not only that, but according to the Brewers Association (BA) Tree House is the largest producing brewery in the U.S., possibly even the world, whose beer is in such demand that it has yet to go into distribution. Think about that. In 2019 they sold 49,000 barrels of beer, enough to be ranked the 59th largest producer in the U.S., and every drop straight from their brewery. Astonishing.

Trillium, meanwhile, grew its production by more than 30% in 2019, to some 22,000 barrels, nearly enough to crack the nation’s 100 biggest list. Practically all of that beer was sold on-premise as well, at any of their three breweries or at their popular beer garden on the Greenway. As Fields put it, “who else is doing that anywhere in the country!?” On to beer ratings, which are admittedly subjective. That said, when all of the major ratings apps are saturated with Tree House and Trillium beers, especially in the ultra-competitive IPA and Stout categories, it counts for something. Again, we’re not big fans of beer ratings – but let’s face it, sometimes perception is reality. 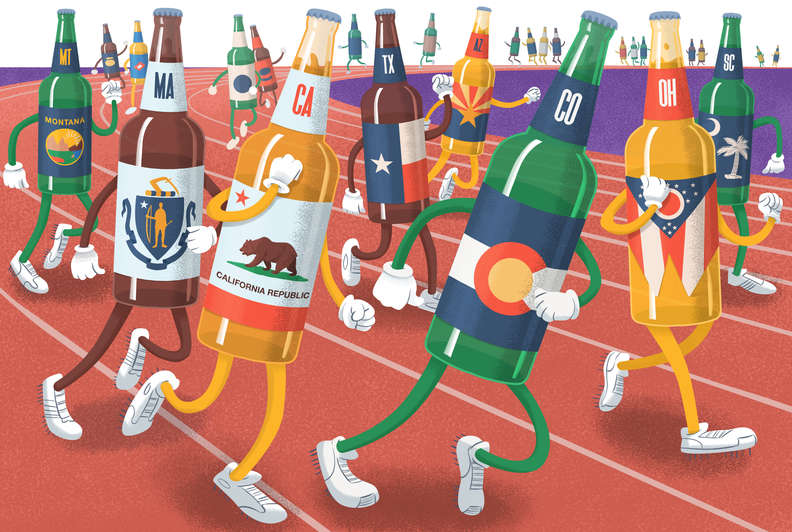 Thrillist ranked Massachusetts the fifth best beer state in its 2018 rankings. They’ve since discontinued those ranking in favor of identifying the top-rated beer in every state, which in 2019 was Tree House’s Julius.

Hear what Wormtown’s David Fields had to say about the Massachusetts beer scene on the Brew Roots podcast.

In regards to the standing of the Massachusetts beer industry as a whole, however, Fields contends that reality hasn’t been as easily perceived. “California, Oregon, Washington State and Colorado may be bigger,” he says, “but I don’t think any of them can compete with the street cred of Massachusetts’ breweries – not in volume (the amount produced and sold) and not when it comes to setting national trends.” The Bay State has the 15th largest by population in the U.S., but ranks 13th in beer production. Include the production of Sam Adams – the 2nd largest brewery in the country, though almost all of its beer is brewed in Pennsylvania and Ohio – and Massachusetts would jump to 2nd in overall production. It also boasts 8 of the top 100 biggest breweries in the U.S., a tally that’s only second to California, a state whose population is six times larger. And keep in mind that both its breweries per capita and its consumption per capita are in the middle of the pack. Just imagine if citizens of the Commonwealth started drinking as much of their beer as other states appear to be.

So how about a less biased opinion on where we stand. Just last month, national publication Brewbound reported that “Massachusetts continued to be a hub of craft growth, as breweries such as Jack’s Abby (+15%), Lord Hobo (+25%), Night Shift (+21%) and Wormtown (+27%) each recorded strong double-digit growth.” In all, six of its top eight breweries were up double digits, five of them for at least the third year in a row – no small feat for bigger, regional brewers says Fields. Additionally, each of them has garnered their share of accolades and national press for beer quality. And let’s not forget about Wachusett Brewing, whose resurgence and steady growth as a large, mature brand has bucked the national trend of retraction experienced by many of the 50 biggest breweries.

Expand the scope to include micro breweries that have earned national attention and the case for Massachusetts occupying the top spot is arguably even stronger. Exhibit ‘A’ Brewing (2016), Vanished Valley (2017), and Brewery Silvaticus (2017) have each made Beer Advocate’s Best New Breweries list, while more recently Channel Marker and Vitamin Sea Brewing were named among the nation’s best new breweries by Hop Culture. Several others, including Greater Good Imperials (400%), Lamplighter (96%), and Mighty Squirrel (200%), have recently experienced astronomical year-over-year growth despite an industry-wide slow down that’s averaged just 4 percent.

There’s also Cambridge Brewing Company, whose brewmaster won the BA’s prestigious Russell Scherer Award for Brewing innovation. And Sam Adams’ Utopias, one of the most innovative beers in the world. Or Harpoon’s pioneering role as introducer of the East Coast IPA. Or Notch Brewing’s pioneering role in popularizing Session beer in the U.S.. And in a 2019 compilation of the best states for beer lovers Massachusetts ranked fifth overall, but took the top spot nationally for beer quality.

If you’re still not buying his argument for Massabrewsetts as the country’s best beer state Fields invites you to throw the rest of New England into the mix. No other region can compare with so many world renowned breweries, he contends: “Allagash, Bissell Brothers, Maine Beer Company, [Tilted Barn, New England Brewing, Fox Farm, Deciduous,] The Alchemist, Hill Farmstead, Lawson’s, and the list just goes on and on.”

Do These 3 Things To Be An Eco-Friendly Beer Drinker