The Problem With Beer Ratings 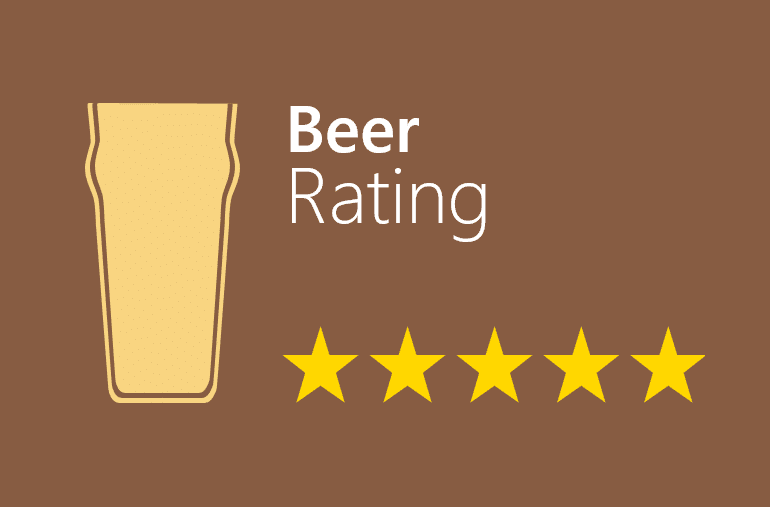 “Your Hops Are Wrong”

Matthew Steinberg’s Sunday morning started with a plea to a colleague, renowned Trillium brewer Jc Tetreault. On Facebook he posted: “Please help me Jc Tetreault. I was on Untappd again this morning. I know, I know, you tell me to stay away from it. You really should be monitoring my computer usage.” Actually it wasn’t so much a plea as a jest, a way to blow off a little steam over his frustration with the way some people use beer ratings apps, websites, and on-line forums. “One person even called one of my beers ‘Meh,” he explained, sarcastically adding, “I thought, wow, he really nailed it, that’s exactly the kind of criticism that will help me make better beer.” 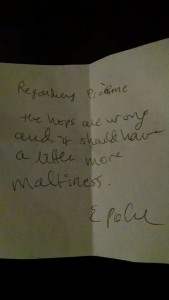 The infamous note found on the bar at the Idle Hands taproom in Malden.

Steinberg, head brewer at Exhibit ‘A’ in Framingham, isn’t alone in his frustration over beer ratings, or at least the lack of sophistication behind most of them. Within just a few hours, more than 30 people had joined the Facebook conversation, many of them brewers themselves. “Someone panned our gose because it was sour,” wrote Nathan Sanborn, brewer at Rising Tide in Portland, Maine. “A patron told me, you’re cream ale is too much like regular beer ” quipped Jeff Rowe, brewer and co-founder of Somerville’s Winter Hill Brewing. “That one had me laughing for days.” Then came the kicker, from Idle Hands Craft Ales founder Chris Tkach, who shared a note that had been left in his taproom a day earlier: “Regarding Proème – the hops are wrong, and it should have a little more maltiness.”

Opinions Are Like Armpits: Everyone’s Got a Couple, But Most of Them Stink

The note drew another barrage of comments on the Facebook thread, most of them from industry professionals, all of them incredulous. Overriding sentiment was that brewers like Steinberg and others should simply shrug off poor ratings, not bother to invest the emotional energy. “I can’t look at any of the ratings apps or forums,” admits Tree House co-founder Dean Rohan. “I’m way too emotionally invested. Our philosophy is to make the best beer we can and then let the rest take care of itself.” But that’s easier said than done when your livelihood depends on consumer opinion, especially if it’s an uninformed one. Eric Muniz, head brewer at the Fenway Beer Works location, believes most people reviewing anything, let alone something as subjective as beer, don’t have the qualifications to give meaningful opinions. “On-line beer reviews should be taken with a dump truck of salt,” he says.

Click here to answer our poll question on what you think about beer ratings.

It’s good advice. Especially when we’re living in a time of alternative facts and fake news, where armchair quarterbacks second-guess super star athletes, and patrons tell professional brewers how they should rework their recipes. It all begs the question of whether beer ratings actually mean anything at all. Medusa brewer Keith Antul thinks you can learn a lot from ratings by comparing average scores of a style like Kolsch (somewhat low) against average scores for IPAs (considerably higher). “What we learn is that Untappd users like IPAs a lot more than Kolsch, a style they likely don’t understand very well.” He’s undoubtedly right. Look at any list of top-rated beers and its bound to be over crowded with IPAs. Great if you’re a hop head. Not so much if your into fruit & spice, or prefer malt flavors. For someone like me, who falls into the latter category, any list of beer ratings that’s top loaded with IPAs reminds me of the colloquialism, there are lies, damned lies, and statistics, or in this case, ratings dominated by a single category.

“Your Mouth is Wrong”

Don’t get us wrong, or any of the brewers we’ve quoted here either, no one’s saying you can’t have an opinion (though we decided some time ago to keep ours to ourselves). Beer ratings have their place, especially when done thoughtfully. “They can be an important tool that helps brewers understand the aggregate opinion of a portion of their customers,” explains Trillium’s Jc Tetrault. “There are benefits.”

Brewers know this. Steinberg, whose Exhibit ‘A’ was recently selected one of the best new breweries in America by Thrillist, reminded us that he was a big proponent of beer review forums back in the day. He wishes more patrons would ask questions about his beers when they’re visiting the brewery, especially the ones they’re least familiar with. “Ratings will never be perfect,” says Jason Allstrom, co-founder of Beer Advocate, the most popular beer ratings site in the world. He admits that early on in his craft beer journey he too had to learn things like what role hops play in the creation of a beer. “Knowing is half the battle,” he says. “Getting as much information out to the public as possible would go a long way in helping.”

It’s not like there aren’t resources out there. BA’s beer education section covers everything from beer history to how to taste beer. Visit any Craft Beer Cellar in the state and you’ll find a “beer geek” behind the counter who’s more than willing to school you on local breweries, different beer styles, and more. Craftbeer.com has even put out a list of beer schools and classes. We recently took Cicerone’s on-line Beer Savvy course and became certified beer servers. It only took a few hours, and was well worth the $200. To get you started, here’s a great primer on the 7 flavor categories of beer, and a free on-line beer knowledge quiz. 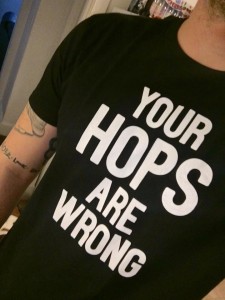 Helder Pimentel sporting the shirt inspired by the “condescending douchebaggery” of a beer reviewer.

One other suggestion: the next time you’re about to rate or comment on a beer, ask yourself the following questions: (1) Do I actually know anything about the style? (2) am I unbiased about the style and its flavor profile? (3) Am I qualified to rate this beer fairly? If the answer to any of those questions is no, then consider learning more about it before giving it a rating. Or at the very least, include a comment that acknowledges your bias, or lack of expertise concerning the style.

Now before anyone tries to analyze the hand writing on the aforementioned note, or forms a posse to hunt down the arrogant SOB that left it, keep in mind that he gave us all reason to stop and reflect on how we use ratings. That clueless patron’s presumptuous gesture also inspired Backlash Beer founder/brewer Helder Pimentel to do some good. Within a day, he’d printed up t-shirts with “Your Hops Are Wrong” emblazoned on the front. If you see a brewer wearing one, you’ll be in on the joke. They’re for sale at yourhopsarewrong.com, and all proceeds from the shirts will be donated to charity. We’ve already ordered ours.

Finally, out of all the comments the pompous note incited, our favorite came from Springdale General Manager Joe Connolly when he responded, “your mouth is wrong.” In addition to being a great retort, it’s a useful reminder for the beer reviewer in all of us that taking a second sip of that new brew will probably taste a lot better than putting your foot in your mouth.