Co-founders Joel Prickett and David Kushner realize they’ll be the new kids on the block when they open Somerville’s fifth craft brewery, Remnant Brewing, this weekend. But like the popular 1980s boy band with that very name, they’ve got a talented team that should be ready to entertain the crowds. Kushner was the bar manager at John Harvard’s Brewhouse, Prickett was part of the team that launched Lord Hobo Brewing, their head brewer, Charlie Cummings, earned his chops at Mystic Brewery, and taproom manager Brittany Lajoie worked in the catering industry. Together, they should have the right stuff to be the centerpiece of Union Square’s new Bow Market, a former storage building that now houses some 30 food, art, and retail vendors.

The opening comes just in time for Porchfest, an annual celebration of music performed on the city’s porches, yards, and gardens, which this year culminates in Union Square on Sunday afternoon due to yesterday’s rain. Cummings has been brewing on the new 7-barrel system for a few weeks now and should have plenty of beer to supply the 2,700 square foot taproom and large outdoor beer garden that combined accommodate close to 200 guests. Initial offerings include a soft and smooth Pale Ale called Dream Pop, an easy drinking Session beer called Bow Street, a Farmhouse Gose with peach puree called Lightform, and an IPA called Clip Art. Coming soon are a Dark Ale, another IPA, and maybe even a Barrel-Aged Stout. “Having a smaller system makes for lots of possibilities,” says Cummings. 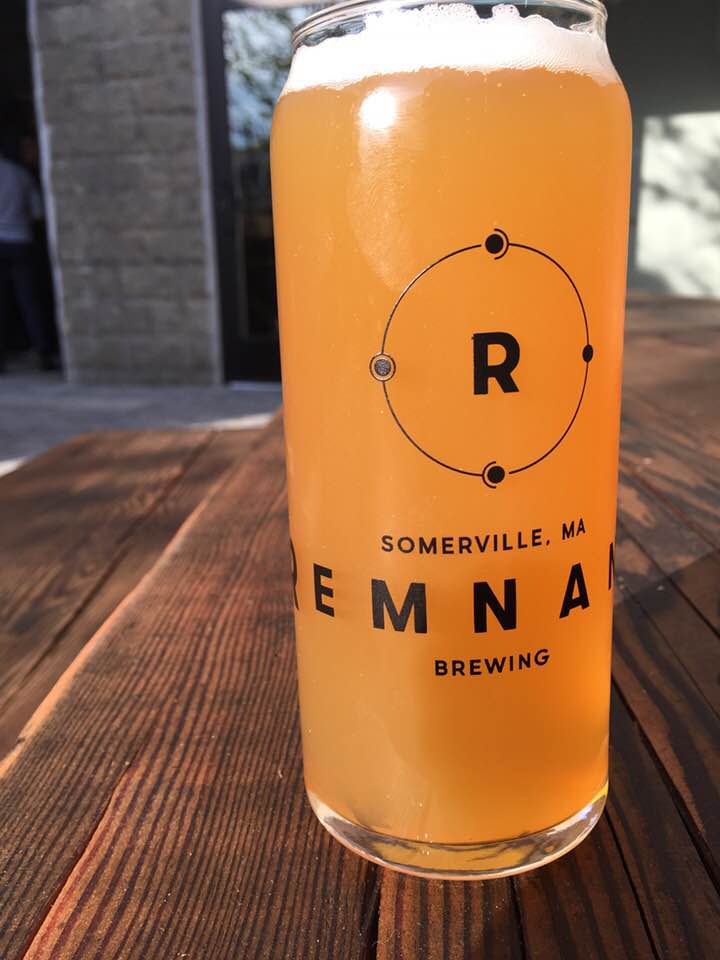 Bow Street Session Ale is one of four initial offerings from Remnant Brewing, who opens in Union Square this weekend.

Remnant plans to be open seven days a week, from 9:00 am (they’ll serve coffee from Barrington Coffee Roasters) until about 10:00 pm on most days. Featuring an open view to the brewery, which is set a few feet beneath the taproom floor, patrons will get to watch Cummings and the other brewers at work. There’s also an area near the rear of the taproom that will be available for private functions and community events.

Community promises to be a big part of what the upstart brewery hopes to provide, along with great beer. “We’re actually excited about being the new kids on the block,” says Kushner, “it gives us an opportunity to meet our neighbors, both the patrons and the other local breweries.” The other local breweries he refers to include Slumbrew locations in either direction, Aeronaut to the West, Winter Hill to the North, and then Lamplighter and Cambridge Brewing Company both to the South. Counting Remnant, there are seven breweries clustered within three miles of each other, which Kushner sees as a good thing. “Cambridge and Somerville are packed with people,” he says. “If anything, that many great breweries all in one place makes the area a pretty appealing craft beer destination.”