How the Biggest Massachusetts Breweries Performed in 2018 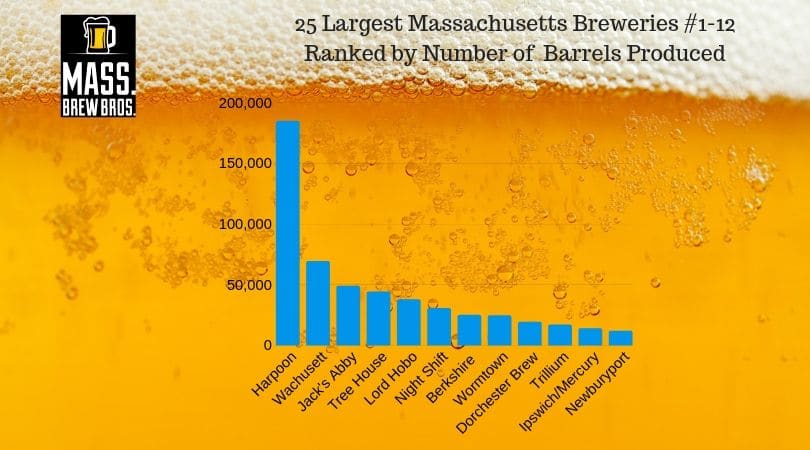 The Brewers Association (BA) recently published its annual industry review issue, an examination of the previous year’s production numbers for the nation’s more than 7,300 independent craft brewers. Of note was that many of the larger, so-called regional breweries (those who produce 15,000 barrels or more) struggled to grow or even retracted in 2018. The Bay State’s biggest breweries fared a bit better, but competition continued to stiffen and there were a few surprising numbers reported by some of the state’s leading brands. Let’s start with some insight and analysis on the chart in the featured image above.

Of note is that Boston Beer, better known by craft drinkers as Sam Adams, is not listed on our chart of the largest local breweries because it brews less than one percent of its beer at its local R & D brewery in Jamaica Plain. According to an employee at the brewery, its Boston headquarters only produces beer for festivals, exclusive local draft accounts, and tour & taproom consumption. The rest is brewed at its large scale breweries in Pennsylvania and Ohio.

Similarly, Nantucket based Cisco Brewers is not charted because it produced the bulk of its 21,500 barrels of beer at the Craft Brew Alliance (CBA) facility in Portsmouth, New Hampshire. The brand and its distribution is now fully owned by CBA, who is partially owned by AB-InBev and therefore no longer meets the BAs definition of a craft brewer. Small scale brewing operations on the island brewery, which Cisco retained in the deal, is reported separately and still considered craft by the BA.

Harpoon, who topped the Massachusetts list and ranks as the 18th largest brewer nationally, produced two thirds of its 185,000 barrels at its South Boston brewery. The rest was brewed at its second facility in Vermont. As with many of the country’s largest and oldest breweries, their production was flat for 2018. Were it not for the inclusion of Clown Shoes‘ production numbers, a brand they acquired in late 2017 and who accounted for an estimated 12,000 barrels, Harpoon would have lost ground.

Another mature brand, Ipswich Ale Brewery, faired worse. It manufactured roughly two thirds of its previous year’s total. Much of the decrease was attributed to its contract brewing arm, Mercury Brewing, which previously brewed Clown Shoes’ beer. Virtually all of that production should be replaced by Newburyport Brewing in 2019, however. The two recently formed a strategic partnership in which Ipswich/Mercury will brew Newburyport’s beer while it pursues plans to build a new destination brewery that will focus on small batch beers and live music events. Newburyport’s production, much of it distribution, was flat for a second year in a row.

The only other regional brewery that didn’t experience growth in 2018 was Trillium, whose production was essentially the same as last year. Surprising, given the opening of an additional 10-barrel brew house at the Fort Point restaurant and brewery which opened and began brewing in October. It’s unclear whether Trillium has maxed out consumer demand with their taproom-only sales model, is suffering from a shortage of resources necessary to increase production, or has been overly focussed on expansion plans such as the indoor-outdoor taproom slated to open this summer near Fenway, Trillium Farm and Brewery in Connecticut, or the recently announced plan to move Canton operation to a custom built brewery and restaurant at the former Reebok campus across town.

Tops in growth among Massachusetts regional breweries was Tree House Brewing, up some 130 percent. One of just a handful of regional breweries listed among the nation’s fastest growing by the BA, they produced an eye-popping 44,000 barrels in their first full year at their state-of-the-art facility in Charlton. What’s more, they sold virtually all of it direct to the consumer at their brewery, making them the largest producing U.S. brewery without distribution. Among their ongoing projects are a 16,000 square foot expansion of the Charlton retail space and brewery, continued maturation of the barrel aging program at their former brewery in Monson, and the development of the Tree House Orchard & Farm Fermentory in Connecticut.

The other notable success story in 2018 was that of Night Shift Brewing, who increased its production by 62 percent and surpassed 30,000 barrels. Already at capacity on its 20-barrel system in Everett, most of its growth was through its contract brewing partnership with Isle Brewers Guild in Rhode Island which allowed them to expand their distribution footprint significantly. The recent addition of their Lovejoy Wharf location, continued traction within the light lager category, and further distribution expansion (most recently Connecticut) should lead to further growth within its craft beer division in 2019.

Two more that observed notable jumps were pioneer Berkshire Brewing (BBC) (up 19%) and partner brewing outfit Dorchester Brewing Company (DBC) (up 33%). BBC, one of the state’s oldest breweries, was a bit of a surprise. Its growth (which includes contract brewing production) was in part due to a transition from mainly growler and bottle distribution to a high-tech canning line. DBC, which also produces its own house brews, saw an increased demand for its state-of-the-art partner/contract brewing services from  clients like Connecticut’s Fat Orange Cat, Massachusetts based Entitled Beer Company, and Maine’s Lone Pine Brewing. DBC’s recently announced expansion, which will include a second tasting room and new restaurant, as well as a greenhouse surrounded by a roof deck, should help them boost on premises sales further.

Others boasting growth included Lord Hobo (up 16%), Wormtown (up 15%), Jack’s Abby (up 11%), and Wachusett (up 8%). All impressive numbers considering their size and the continued positive performance they’ve posted over the last several years. Have a look at the chart of the state’s largest micro breweries below and then scroll down for further analysis. 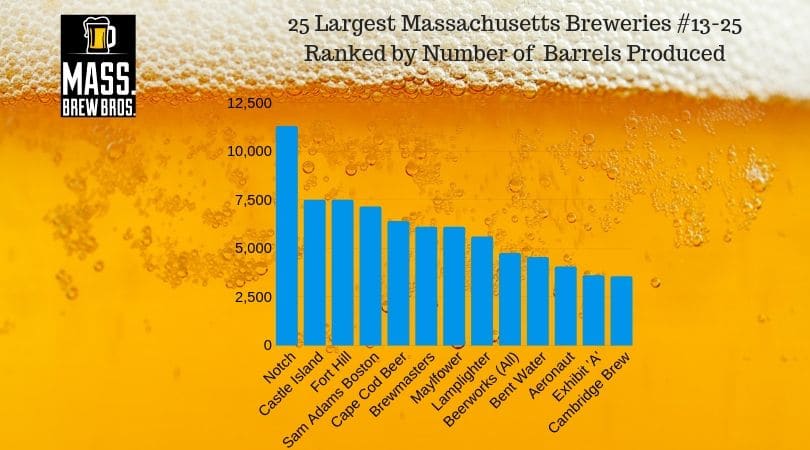 Numbers in above charts are based on BA estimates and state tax records. In most instances they’re confirmed by the brewery.

Among the familiar micro breweries maintaining spots in the top 25 this year are Salem’s Notch Brewing, Easthampton’s Fort Hill Brewery, and Norwood’s Castle Island Brewing, all of whom sell the vast majority of their beer through region-wide distribution. Notch, which started exclusively as a contract brand, still has the majority of its beer brewed at Two Roads Brewing in Connecticut. Barnstable-based Cape Cod Beer also sells most of its beer through distribution, but its footprint is focused on the Cape & Islands and much of its sales are seasonal. Joining them on the list again are Lynn’s Bent Water Brewing and Somerville’s Aeronaut Brewing, both of whom also enjoyed double-digit growth in 2018. Tailing off a bit but hanging on to their top 25 spots were Mayflower Brewing, the Beerworks brewpub chain, and Cambridge Brewing Company. Note that the production number for Beerworks includes all six of its locations, only three of which are still brewing on premises. Therefore, Cambridge Brewing Company is the state’s largest individual Brewpub. Bumped from the list this year were Spencer Trappist Brewery, Down the Road Beer, and Somerville Brewing, aka Slumbrew.

Three breweries making their first appearance on the chart this year are Framingham’s Exhibit ‘A’ Brewing, Brewmaster’s Brewing Services, and fast-rising Lamplighter Brewing in Cambridge. After earning the distinction of being named one of the nation’s best new breweries by Beer Advocate three years ago, Exhibit ‘A’ has continued its steady rise into the top 25. Brewmaster’s, a busy but little-known production brewery in Williamsburg that produces beer for contract brands including Brewmaster Jack, Opa Opa, and White Lion, reported its totals for the first time. The most impressive newcomer was Lamplighter, who went from producing just under 2,900 barrels in 2017 to a whopping 5,600 this year. The 93-percent increase was likely a combination of increased brand recognition and expanded distribution, as well as the addition of a second taproom at their popular neighborhood brewery.

Two Breweries that fell just short of making our top 25 chart, but are likely to make it next year, are Mighty Squirrel and Greater Good Imperial Brewing. Both started out as contract breweries, with the former opening its own state-of-the-art brewery in Waltham last December and the latter doing likewise earlier last year. We aren’t privy to Mighty Squirrel’s production numbers from 2017, but at 3,000 barrels for 2018 it’s likely they grew substantially. Now that they’ve got their own taproom and are gaining traction with wider distribution of their IPAs (previously they focused on protein-enhanced beer), we expect their 2019 totals to be even higher. That’s precisely what happened with Worcester’s Greater Good Imperials, who leaped from 600 barrels as a contract brand in 2017 to 3,100 at their own brewery last year. The astonishing 400 percent increase would have landed them on the BAs aforementioned Fastest Growing U.S. Breweries list if they had reported their numbers to the trade association. So far in 2019 they’re tracking at 7,600 barrels for the year.

Our final chart below shows how the 629,000 barrels of beer brewed in Massachusetts during 2018 was divided among all of the state’s craft brewers. 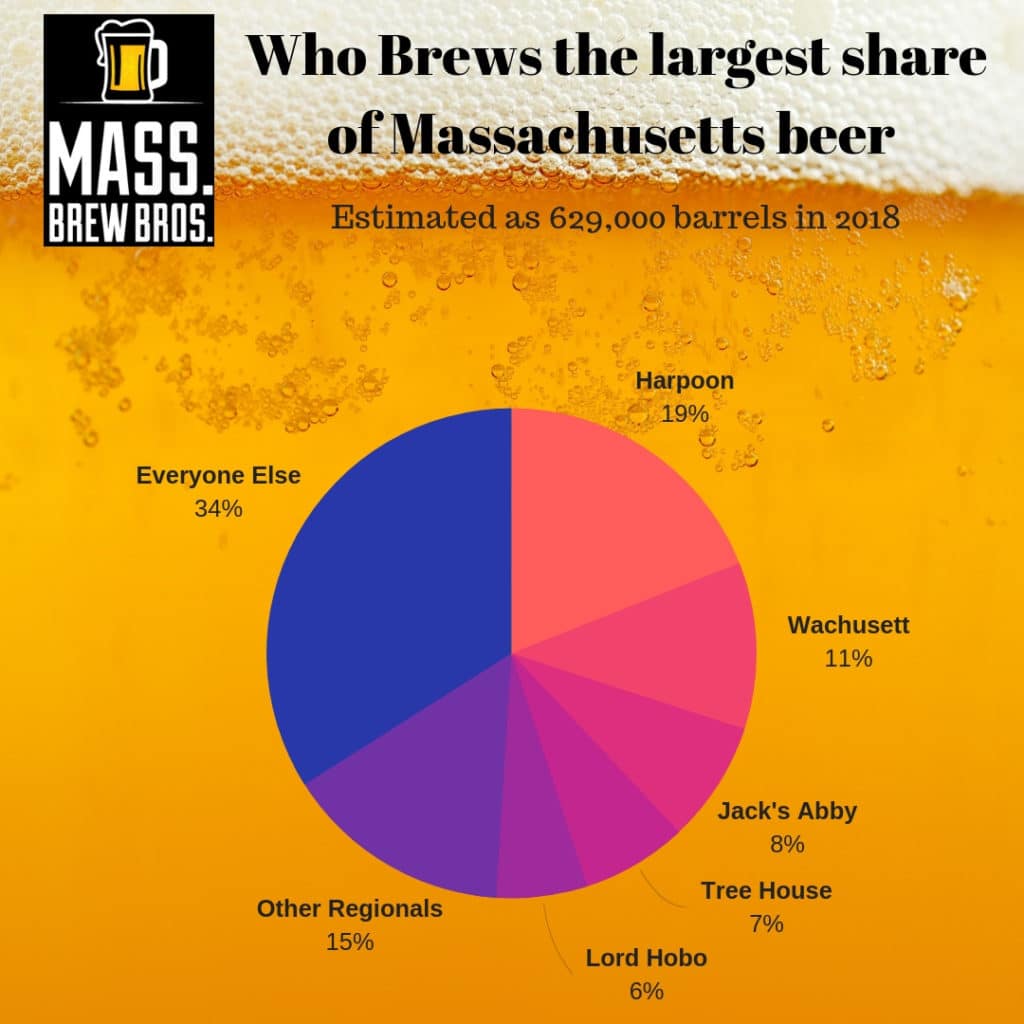 The Bay State’s 10 regional brewers accounted for nearly two thirds of the state’s total beer production in 2018, with the remaining portion coming from the other 168 micros & nanos.

The state’s largest players, regional brewers, accounted for just over six out of every ten locally produced craft beers in Massachusetts last year. That number is up slightly from the year before. As more breweries continue to open (we estimate that another 20-plus could debut by year’s end, pushing the total well past 200), it will be interesting to see how the above chart evolves in the coming years. Will it continue in a rich-get-richer way as it did in 2018? Or will the regionals fall more in line with the national trend toward leveling off? We’ll be watching to see how it all unfolds.

If you have thoughts, observations, or questions on the data presented here, hit us up in the “Submit A Comment” section below.