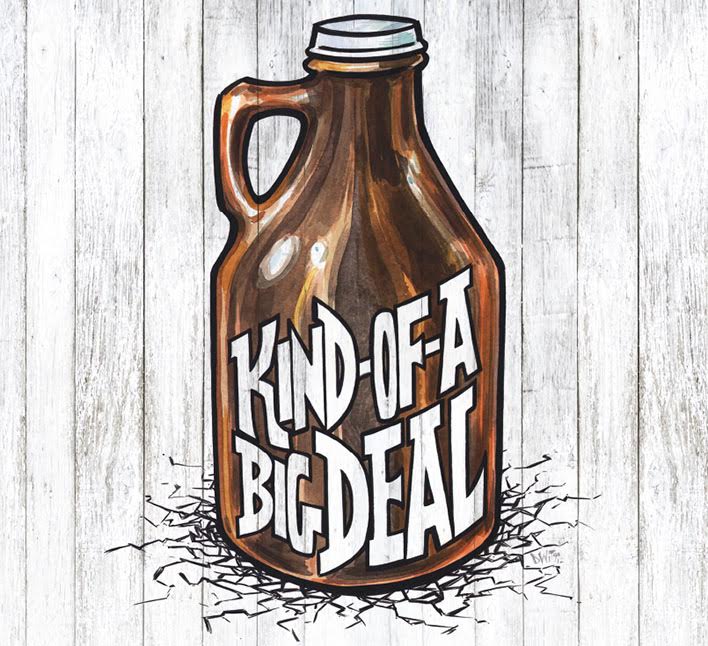 With more than a hundred breweries to chose from in Massachusetts, some considered world class, about the only thing local craft beer fans have to complain about these days is our state’s dysfunctional growler law. It may not seem like much, but the issue is kind of a big deal. Just ask local beer guru Norman Miller, aka, The Beer Nut. No one loves beer more than him, but even he’s sick of buying growlers. “I’m tired of them, I have way too many laying around the house gathering dust.” It’s a sentiment we’ve heard often during our beer travels over the last two years. The good news, we’ve discovered, is that many breweries have noticed, and are taking steps to ensure thirsty visitors don’t go away disgruntled or empty handed.

Once the standard to-go vessel for many craft brewers, the traditional glass jug has fallen out of favor with a growing segment of craft beer drinkers in Massachusetts, fed up with the state law requiring them to purchase another container every time they visit a new brewery. “I have at least 30, and I’ve probably discarded a hundred more,” laments craft beer connoisseur Paul Chase from Lowell. “The Massachusetts growler law drives me crazy.” 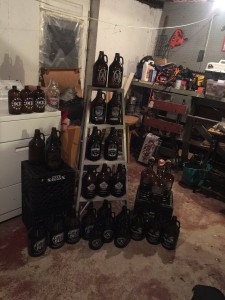 Like Matt Walsh’s collection of nearly 40 growlers (pictured here), ours has grown so big that it’s been relegated to the garage.

He’s not alone: a survey we conducted last week found that two thirds of those who responded have at least a dozen of those cumbersome 64-ounce glass growlers at home (many breweries now offer 32-ounce howlers or squealers as well). “I do my best to avoid accumulating them and still have way too many,” said local beer reviewer Ryan Brawn. Other beer lovers find themselves in the same conundrum: Matthew Walsh has a collection of nearly 40, Raymond Long says he has “more than my wife thinks I need,” and Myron Freeman exclaims he has “too bleeping many!”

Prompted by one of our recent social media posts, craft beer fanatic Eric Murray found he had 26. He’d like to see breweries be willing to fill any growler, regardless of it’s label. Vermont, Connecticut, and Rhode Island already do it, but it doesn’t seem likely here in the Commonwealth. A current proposal to change the law is awaiting debate in conference committee, but more than one brewery we spoke with expressed apprehension about putting its beer in a container that has someone else’s brand on it.

Whether the proposed changes pass or not, contention over growlers isn’t going away any time soon. While some breweries, like Night Shift, are doing away with them all together, nearly three quarters of the state’s beer producers still use them, and some have invested in high end systems or custom bottle designs. For many consumers, however, having to maintain an unwieldy growler collection doesn’t sit well. Some have simply stopped purchasing them all together. “I’m at the point where I won’t buy the beer if it means having to take home another growler,” says craft beer enthusiast Jocelyn Barrett. Fellow aficionado Will Reddy, also a supporter of growler reform, has half kidded that it may be time for a ballot initiative. 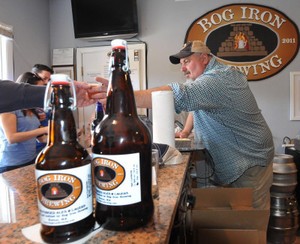 Inspired by a Twitter thread we started, Bog Iron Brewing in Norton initiated a growler exchange pilot program that allows patrons to trade in any growler for one of theirs, at a cost of just a dollar.

The Mass. Brewer’s Guild, which represents some but not all of the state’s breweries, is well aware of the issue, yet has struggled to reach a consensus among its members or to sponsor a bill of its own. One idea is a generic or common growler, perhaps with a “Mass. Beer” logo design, that could be filled by all the state’s breweries. “That might alleviate the branding concerns raised by some breweries,” says the guild’s chair of marketing, Keith Sullivan, also co-owner of Medusa Brewing in Hudson. “Of course that’s not an official position*, it’s just the opinion I bring to the guild.”

Ultra runner and craft beer enthusiast Kyle Robidoux would love to see a universal growler law. So would Isaac A. Boucher, a brewer at 603 Brewery in Londonderry, who was bummed when New Hampshire tried but failed to pass a similar law a couple of years ago. “Personally, I love the idea,” he told us. “I’m often discouraged from buying beer when I visit a new brewery if I have to buy another growler.”

Bottles, Crowlers and Cans, Oh My

Tired of waiting for the guild and its members to work things out with lawmakers, many craft beer drinkers are taking matters into their own beer-clutching hands. Zach Rothman, Raising the Barstool on Twitter, who describes himself as the poster child for growler reform, purged his growler collection in favor of drinking craft beer from cans. “Their convenient, easy to transport, and preserve the freshness of the beer longer,” he believes. Several Bay State beer makers are believers too, including Big Elm brewer and founder Bill Heaton. His brewery started offering cans just four months after opening, as soon as it had sold enough beer to finish paying for the canning line. “At the time there was less competition within the canned beer section of most liquor stores, so it allowed us to distribute more easily,” he explained. 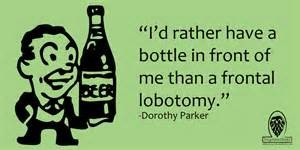 Common sentiment of craft beer drinkers when it comes to our state’s current growler law.

It’s not the case anymore. Even small breweries have caught on to the trend, often using a mobile canning company like Iron Heart, started by a would-be brewer who recognized a need and opened New England’s first such service back in 2013. Riverwalk Brewing, who signed on with them this summer, gets fresh batches canned every two weeks. “I think cans are having their day for a reason,” explained BostInno lifestyles editor Alex Weaver, whose favorite vessel is the 16-ounce tall boy or pounder. “They’re easy for brewers, great for keeping beer fresh, and provide the perfect imbibing experience” (imbibing means drinking, we had to look it up).

Still, even breweries like Lynn’s Bent Water Brewing, who’ve offered cans from the get-go, have realized the value in multiple options. Also proprietors of the traditional taproom model, selling pints and growlers, they plan to realease a Russian Imperial Stout later this month in 22-ounce bomber bottles. Others, including Wormtown Brewing are expanding choices for their consumers as well. “We offer 6-packs of 12-ounce bottles and 4-packs of 16-ounce cans,” explained the brewery’s managing partner, David Fields. “Both have a place in the current market, so why choose for our consumers.” 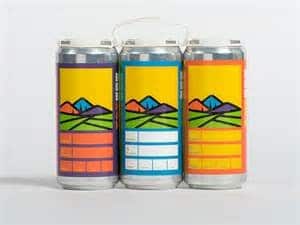 Crowlers, like these from Bright Ideas Brewing in North Adams, are gaining popularity as an alternative option for beer to go.

Another trend vying for consumer attention lately is the crowler, a 32-ounce to-go vessel that’s a cross between a can and a growler. At least ten Bay State breweries have them already, including Notch, Aeronaut, and Start Line Brewing, who opens in Hopkinton tomorrow. Cape Cod’s Devil’s Purse Brewing has offered them since they opened in May of last year. In addition to being popular with beach goers, “people looking for traditional growlers are usually consoled by what is essentially a really big can,” says brewer and co-founder Matt Belson. Brewers themselves can be consoled by the crowler also. Such was the case with Somerville’s newest beer maker, Winter Hill Brewing. “We don’t have the space to store pallets of growlers and aren’t interested in a distribution contract,” explained brewer and co-founder Jeff Rowe. “We bought our crowler machine two weeks ago and it’s been the perfect solution.”

Amherst Brewing has come full circle. The brewery (located at the Hangar Pub & Grill), which still sells most of its beer on premise, provides patrons with nearly every beer-buying option available. Shortly after moving from its original downtown location to its current University Drive address in 2011, they installed the first crowler machine in Massachusetts. Since then, they’ve added 16-ounce cans for their popular hoppy beers and instituted the only self-service beer wall in the state. Depending on how they’re new barrel-aging program progresses, they may even start using a cork and cage bottle format in the future. 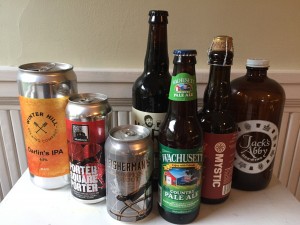 It seems fair to say there’s no one-size-fits-all solution that will suit both brewers and drinkers when it comes to takeaway beer in Massachusetts. Three impressions we came away with are (1) craft beer devotees waiting for growler reform shouldn’t hold their breath, (2) breweries looking to capitalize on the beer tourism trend should consider alternatives to the traditional branded growler practice, (3) the so-called own premise trend of breweries selling pints of beer from their own taprooms is likely to see continued growth, and that’s a good thing – better for the brewery, better for the environment, better for patrons. Currently there are 70 taprooms serving full pours in Massachusetts, with another dozen or so on the way. We hope to see you at one of them. Cheers.

*See the comments section below for the Mass. Brewer’s Guild’s official position, as well as a more detailed opinion from Medusa Brewing.