At Least 12 More Massachusetts Breweries Closed in 2020, Another All-Time High: Here’s Who, and Why 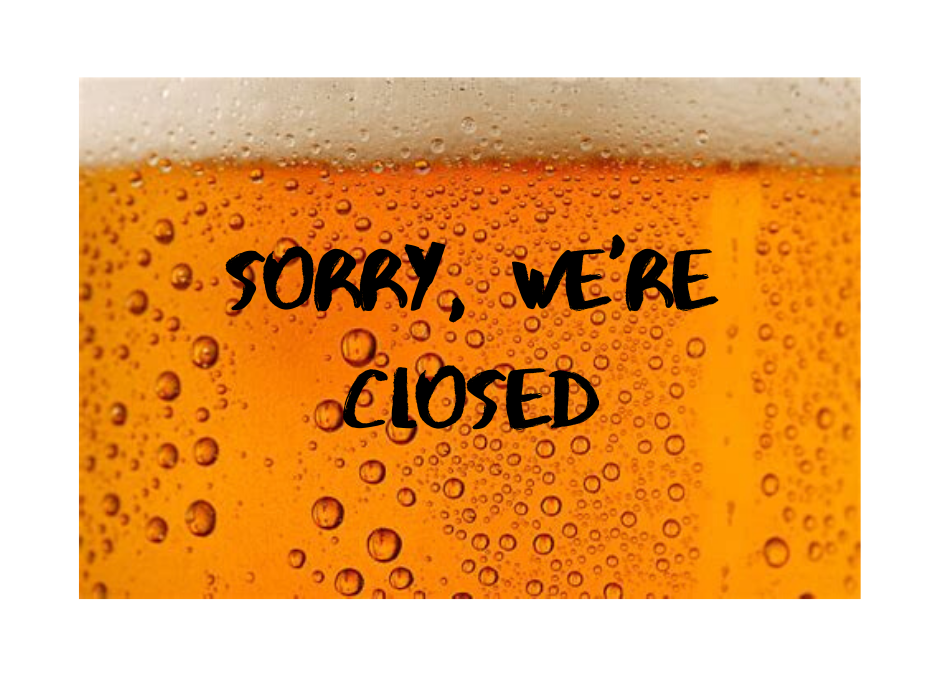 Don’t let the headline fool you, 2020 could have been a lot worse. Our takeaway: maybe we can finally put the bubble talk to bed. Despite several years of “saturation” and “peak beer” speculation, not to mention an unprecedented pandemic that wreaked havoc on small businesses everywhere, it was yet another year of double digit new brewery openings in Massachusetts, 27 to be exact. Admittedly is was tempered by another year of double-digit closings, but overall it was a net gain of a dozen or so more breweries by the end of the year. Here are the 12 whose closures appear to be permanent, and more than half a dozen others that currently face uncertainty or are in limbo.

Just a year after debuting its 10-acre farm brewery in Southwick, Black Rabbit Farm Wild Ales quietly ceased brewing operations in January and put the whole farm up for sale. No word on just why. A shame, considering its gorgeous location, that it specialized in wild ales, and was one of only a handful of woman-owned breweries in Massachusetts.

In February, after 22 years in business, Marlborough’s Strange Brew Home Brew shop and its in-house Strange Brewery announced it was going out of business. Owner Brian Powers reported that he was unable to stay financially afloat any longer, and that Tackle Box Brewing, which leased space inside of the building, would also have to close. Tackle Box has since re-opened in the same building, but Strange Brew is gone for good.

A Story You Might Be Interested In: What 3 Small Massachusetts Breweries Are Doing to Make A Big Environmental Difference

Having started as a small production brewery in late 2017, then later moving from Sandwich to nearby Bourne and adding a taproom, 6A Brewing promptly closed at the end of February. No public announcement was made by the owners as to why it was closing, but it appears the location never really gained enough traction to sell enough beer.

Arguably the most notable closure of 2020 was that of Somerville Brewing, aka Slumbrew, which debuted as a contract brand back in 2011, added a brick and mortar space featuring its own brewery and taproom in 2014, and then a gastropub at Assembly Row in late 2017. According to The Boston Globe, “the buildout of its American Fresh Brewhouse at Assembly Row resulted in a shortage of cash flow and eventually in it falling behind in rent.” The end result was a subsequent Chapter 11 Bankruptcy filing that it never recovered from. The formal announcement of its closing came in early August in the form of the social media post below. 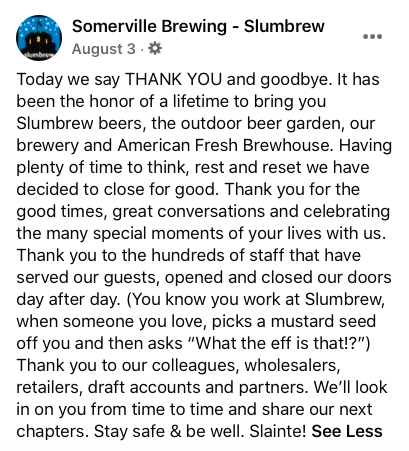 In March, largely as a result of the pandemic, the BEERWORKS chain closed its Boston, Hingham, Salem, and Framingham locations, as well as its production facility in Lowell where most of the chain’s beer was produced. None have yet to re-open, though it’s possible the Boston locations could at some point, post-pandemic. In July, the Framingham location was put up for sale, and by September the Hingham brewpub was closed permanently and its equipment auctioned off. A sign posted on the door of its Salem location states that “at this time we are unsure of a re-opening date for Salem Beer Works and we may very well be unable to open at all.” The future of the Lowell location remains uncertain as well. The chain’s overall production numbers had been steadily decreasing over the last several years, according to figures produced annually by the Brewers Association. Given the uncertainty, we’ve included the three remaining locations that are closed and no longer brewing beer (Hingham, Framingham, and Lowell) in our official tally.

After a seven-year run as a one-barrel nano production brewery in Wayland, Cochichuate Brewing ceased brewing operations in September and sold its equipment, posting the following message on its Facebook account: “Big Thank You for supporting us over the past 8 years. It was a fun hobby, but the time came to close and sell off this hobby. Support local brewers.”

The granddaddy of all closures this year was John Harvard’s Brewhouse in Framingham, which had operated in the corner of Shopper’s World for 24 years before closing in April due to Covid. It had originally intended to re-open in May, but never did. The 8,500 square foot property has since been put up for lease by its owners.

Another high-profile closing began in September, when Hopsters founder and owner Lee Cooper filed for bankruptcy to “reorganize and reinvent” the Newton and Boston locations. Soon after, a Massachusetts Bankruptcy court ruled to strip Cooper of all ownership duties and appoint a trustee to initiate Chapter 7 liquidation, citing “unauthorized use of cash collateral and gross mismanagement,” among its reasons. Apparently unwilling to give up the ship, Cooper told Brewbound in a recent interview that he intends to reorganize under a new entity, purchase the Newton brewery equipment at its upcoming auction, and sign a new lease at the Newton location so he can be back in business once the Chapter 7 liquidation runs its course.

Its Marlborough pilot brewery and taproom have remained open all year, but Flying Dreams Brewing unexpectedly closed its Worcester production brewery and tasting room a few months ago. Its production operations have since moved over to Tackle Box Brewing in Marlborough, but a member of the Flying Dreams team says the long range pans are to re-establish a brewery presence in Worcester.

Several others we know of have gone on hiatus as well (and aren’t included in our official tally of closures), including Democracy Brewing, which intends to open its worker-owned Downtown Crossing brewpub again when the pandemic is has subsided.

Contract brand Off The Cuff Brewing has stopped producing beer and is unclear about its future. “We are still in limbo at the moment,” founder Robert Cook told us. “We are trying to determine if we have a viable path forward given the current climate or if we may just call it a day and shutter the company.”

Also facing an uncertain future is Amherst’s High Horse, which closed down shortly after the start of Covid. No word on when or if it will reopen, or whether it will continue to have any contract-brewed house beers on offer if it does. The former brewpub sold off its brewing equipment several years ago.

Northampton’s Bear and Bramble, formerly a nano production brewery operating in the garage of one of its cofounders, hasn’t produced beer in some time. Remaining cofounder Tym McDowell says he’s working on a plan for a forever home, though, and hoping for a much bigger presence in 2021.

Well known and well respected contract brand Brewmaster Jack is not currently in production, according to one of the partners at Brewmasters Brewing Services, where the brand has been brewed for the last several years. There’s been no activity on the brand’s social media accounts since July, and no word on whether it plans to resume brewing in 2021.

Little-known UNSUB Brewing, a one-barrel production nano brewery in Ware that closed for a while after debuting in 2019, made a second go at it in early 2020 but appears to have fizzled out again. The founder reports that “it’s been a roller coaster of a year. Hopefully we will be able to get a few more small batches out this coming year!”

Veteran-owned Article Fifteen Brewing has closed up and moved out of its Weymouth location and is temporarily on hiatus. The plan is to open a new brewery and taproom space in Rockland at some point in 2021.

Rapscallion has closed its Hyland Orchard brewery and is moving its main operation to Spencer, where it hopes to debut a new brewery and taproom in 2021. According to Its website blog, plans are to maintain a taproom in Sturbridge, above Homefield Kitchen and Brewery, where it will take over brewing operations there so the brewpub can put more of its focus on food.

There are likely other changes that we may have missed in this challenging year, so drop us a line of you know of any we didn’t mention.