About a month and a half ago we published a graph of the state’s largest 25 breweries based on in-state production. Our new graph looks at the list in a slightly different way, exploring what percentage of the state’s total beer production those same breweries are responsible for. It’s essentially using the same production numbers to provide a slightly different look at the impact our state’s biggest breweries have on the local craft beer economy.

For example we know that Harpoon brews more beer than anyone in the Commonwealth, some 120,000 barrels worth in 2017. The new graph allows us to see that number in a different light: one which illuminates the fact that 2 out of every 10 locally brewed pints come from the state’s largest and oldest brewery.* In comparison, nano breweries like Independent Fermentations in Plymouth or Element Brewing in Millers Falls, who produce less than 300 barrels a year, account for just 4 out of every 1,000 pints of locally produced beer.

Of note is that Boston Beer, a publicly traded company better known by craft drinkers as Sam Adams, and the second largest craft brewer in the U.S., is not among the largest local breweries. Reason being, it brewed less than one percent of the 2 million barrels of beer it produced in 2017 at its local R & D brewery in Jamaica Plain.

Have another look at the graph below and then scroll down further for a little more analysis and insight. 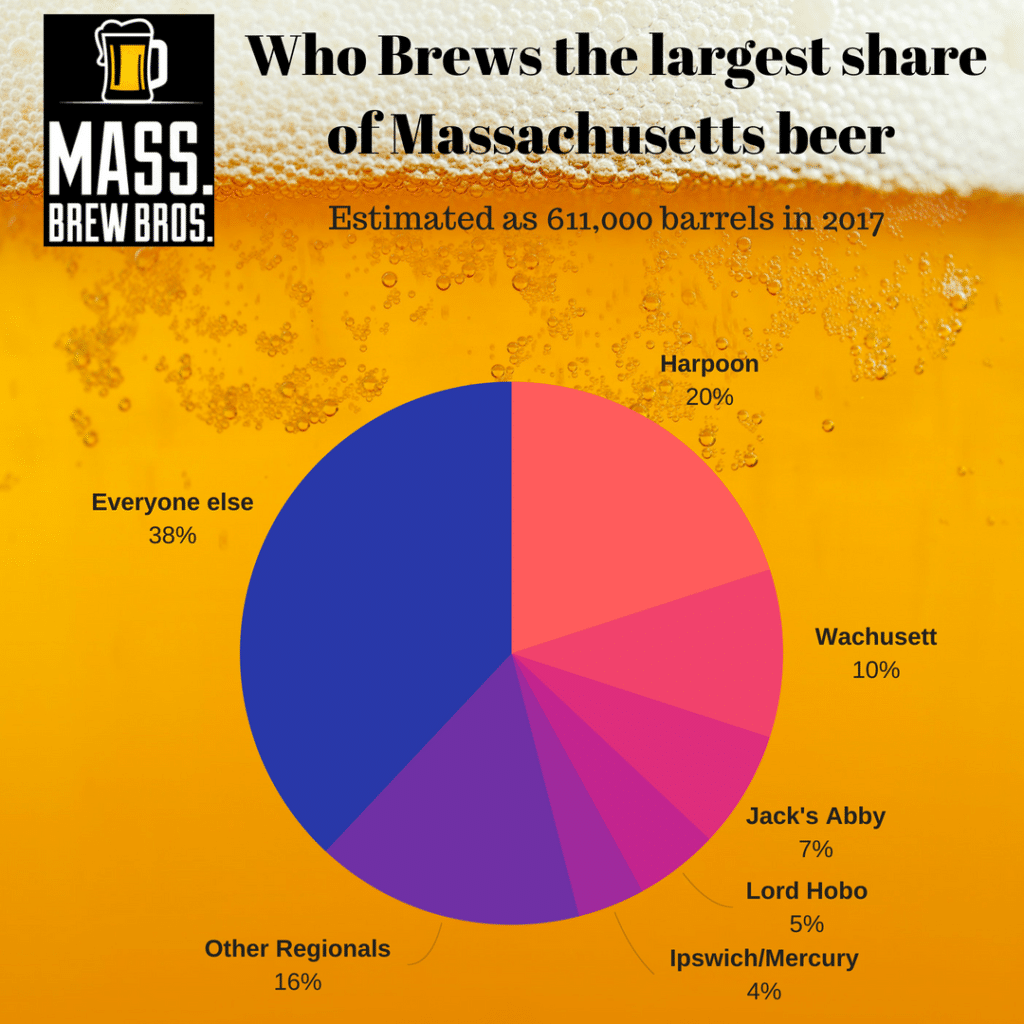 Above calculations based on the Brewers Association 2017 estimate that 611,000 barrels of beer were produced in Massachusetts.

As you can see from the above data, the state’s five biggest players are responsible for close to half the total beer production, although Ipswich/Mercury figures include production from more than half a dozen contract brands, Clown Shoes, Notch, and Mighty Squirrel to name a few. The remaining regional breweries (Wormtown, Berkshire Brewing, Tree House, Trillium, and Night Shift), account for another 16 percent.

That leaves the last 40 percent of Mass. made beer, which is divided up among the state’s smallest breweries, the vast majority of which produce less than 1,000 barrels a year. Put another way, the state’s smallest 100 or so breweries, when combined, account for nearly 40 out of every 100 locally produced pints. This so-called hyper-local trend will be an interesting one to watch as the number of breweries in the state continues to increase.

Equally interesting will be the overall rate of craft beer production growth (5% nationally in 2017), or lack there of, within the state as a whole. With the total number of breweries in Massachusetts expected to swell to nearly 200 by the end of this year, slow growth or stagnation could result in a continued shift of existing market share among the state’s breweries, especially it’s largest ones. And if the portion of larger breweries that enjoyed growth last year (not all did) continue to gobble up market share, there could be less available for some of the smallest. In other words, it’s likely to get more competitive.

If and when the growth of new breweries begins to outpace the growth of beer production/sales, and some would argue it already has, each brewery’s business model will become that much more important. Bubble? No. Shake out? Maybe. Interesting and exciting time to be a craft beer drinker with lots and lots of choices? For sure.

* While Sam Adams was the state’s first craft brewer, debuting in 1985, they did not brew or have their own brewery in Boston until 1987, a full year after Harpoon had opened.

Massachusetts Now Has 160 Breweries, And Counting