3 Of Our Favorite Beers This Week

Happy #MassBrewMonday! We know some of you may take this day off to rest your liver, especially considering all the drinking you probably did during the Patriots’ dramatic victory yesterday. But even if you’re not drinking beer, we want you to be thinking beer. So here are three recommendations. We’re not beer reviewers, but we do have palates and we do have opinions. Here’s what impressed us this past week:

A high-octane offering from their Soak Series, this amped up version uses twice the fruit, produces twice the alcohol, and boasts twice the flavor – a smooth balance of sour and booze. One of us isn’t much of a sour beer fan, but could be converted with brews as delicious as this one. It’s amazing blueberry color, nose of blueberry cobbler, and rich taste of tart sweetness with earthy undertone was irresistible. We were treated to a bottle thanks to unofficial Brew Bro and good friend Eric Murray. We may need to make him part of the family. 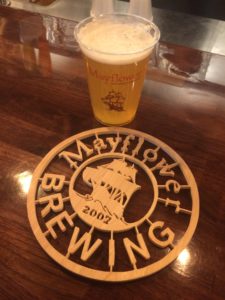 Plymouth’s Mayflower Brewing celebrated its 10th Anniversary Saturday. Woodwork by Paul Kellogg. Done with a scroll saw, Paul considers his creations wall art. He has done other breweries such as Amherst Brewing as well.

We had a chance to celebrate Mayflower Brewing’s 10th Anniversary with them over the weekend. While there, we learned that “the Pilgrims drank beer with nearly all of their meals.” It’s easy to understand why after sipping Daily Ration, the brewery’s hoppy unfiltered American Session Ale. Its mild bitterness, light malt base, and variety of hops give it a citrus aroma and notes of grapefruit and tangerine. Crisp, dry, and bursting with citrusy hop flavor, its no wonder “beer was a staple drink on board the Mayflower.”

A beer we first tried nearly a year ago during a blind tasting, this New England style IPA has come a long way. We had it again Friday night at the Winter Warmer event at the Fairmont Copley Plaza Hotel, and it was a completely different (in a good way) beer. Back in May, the brewers started putting out monthly pilot batches in the taproom and serving them with questionnaires for customer feedback. Six iterations later, they arrived at the current recipe – a hazy, juicy, smooth IPA with aromatics of orange, tangerine, and lime peel.