Happy #MassBrewMonday! We know some of you may take this day off to rest your liver, but even if you’re not drinking beer, we want you to be thinking beer. So here are three recommendations. We’re not beer reviewers, but we do have palates and we do have opinions. Here’s what impressed us this past week:

An annual special release beer, it’s described by the people that brew it as “a Baltic Porter that’s almost a meal in itself.” It’s full body and rich, creamy mouth feel had us saying bon appetite over and over again, though at 11 percent ABV it’s anything but a session beer. Still, it’s roasty aroma and chocolatey taste made us wish we had room for another. Previously distributed in the 22-ounce bottle format, the 2017 version is available at the Night Shift Brewery in four-packs of 16-ounce cans, and on draft at the brewery. 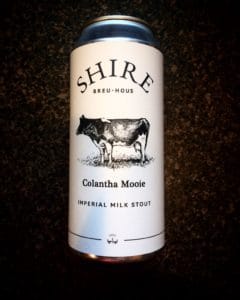 Lady Highfield Colantha Mooie is said to have yielded some 103 tons of high quality milk, but you’ll have to settle for 16 ounces of this high quality Imperial Stout.

A well balanced imperial milk stout, it’s named in honor of the beloved bovine who set a world record for milk production back in the 1930s. Smooth drinking, with nice coffee and chocolate notes, it’s currently available on nitro at their popular new brewpub in Dalton. You’ll have to make the trip out to the Berkshires to try this one, but you can visit the five-foot stone that farmer John Ellis erected in her honor out in front of the former farmhouse in Lee. You’ll also be able to take some of this delicious brew home in cans.

Described on the brewer’s website as “a beautifully smooth New England-Style Pale Ale,” its 6.5 percent ABV and hits you with 72 IBUs of Galaxy hops. The hazy, straw color is what you’d expect for this style, gives off a silky peach-grape aroma, and hits you with tropical fruit flavors, and an elegant mouth feel. Not quite a session beer, but its full of flavor and won’t knock you on your ass. It’s easy to see where they got the idea for the name. Widely available in 16-ounce cans.