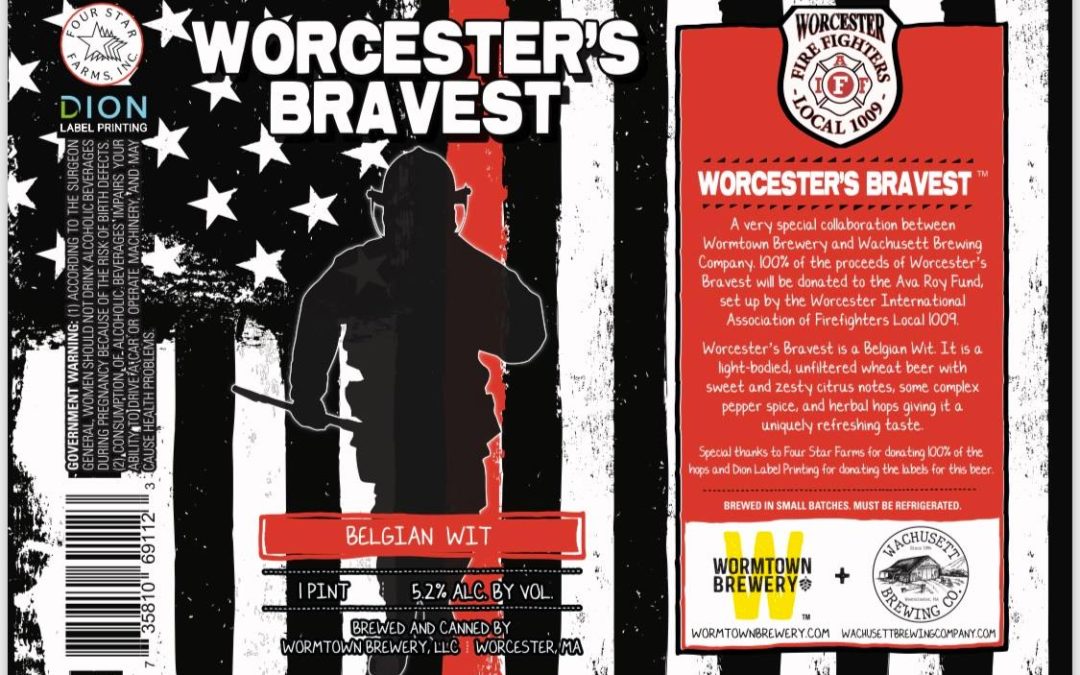 PRESS RELEASE / January 31, 2109 (Worcester, MA) –  The day has finally arrived. Friday, February 1st will see the release of Worcester’s Bravest in both the Wormtown Brewery and Wachusett Brewing Company’s taprooms. Wormtown’s event will kick off at Noon and Wachusett will be starting theirs up at 6pm. Both breweries anticipate large turnouts all in the name of charity.

As two of Central Massachusetts’ most well-known brewers, the two have come together for the first time for a very worthy cause.  In response to the tragic death of Worcester Firefighter Christopher Roy, the two breweries have committed to donating 100% of the proceeds to the Ava Roy Fund.  The fund that has been set up by the Worcester International Association of Firefighters Local 1009 in support of Firefighter’s Roy’s 9-yr old daughter.

“We are super excited to team up with Wachusett on the project.” said David Fields, Managing Partner of Wormtown Brewery. “I cannot think of a better way to honor Firefighter Roy’s memory and his family.”

“Wachusett Brewing Company has had a long relationship with the Worcester Firefighter Community dating back to our original support of the Leary Firefighter Foundation” said Christian McMahan, President of Wachusett Brewing Company.  “David and I have been speaking for over a year about doing something, up until now we never had the right reason to come together, we are both honored to be a part of something that has such a profound impact on our community.”

The beer style for Worcester’s Bravest is a Belgian Wit, a light-bodied, unfiltered, wheat beer.  “It has sweet and zesty citrus notes with some complex pepper spice and herbal hops” said Ben Roesch, Brewmaster of Wormtown Brewery”.  “While still being refreshing and easy drinking” added Dave Howard, Brewmaster at Wachusett Brewing Company.

Donations can also be made directly to the Ava Roy Fund and mailed to the Worcester Fire Department Credit Union, 34 Glennie St, Worcester, MA 01605

Founded in 2010, Wormtown Brewery is committed to brewing world-class beers using locally sourced ingredients regardless of cost. Our motto “A Piece of Mass in Every Glass” means our beers are crafted with the freshest ingredients for the freshest beer. This dedication to quality over quantity has earned us over 160 awards worldwide for a vast collection of recipes, but if it’s a premier IPA you are looking for, we know how to make you Be Hoppy®! Find out more by visiting: www.wormtownbrewery.com