We Ran the Beer Mile, And Lived to Tell About it 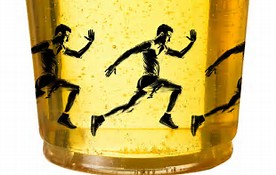 One week ago today we successfully completed the beer mile. The beer what?, you say. No, it’s not some sort of brewery crawl where you visit a bunch of taprooms all within a mile of each other. To become a bonafide beer miler you have to run four laps, guzzling a 12-ounce beer before each one, and finish without vomiting. Yes, it’s a real thing (click the link above if you don’t trust us), and believe it or not, it’s actually pretty fun. Especially when you live to tell about it.

While many were taking advantage of Columbus Day to sleep in, we arose early, packed our cooler, and met our friend Eric (yes, we actually convinced another person to do this with us) at what will remain an undisclosed location. We can tell you that It was at a regulation track, which is one of the requirements if it’s to be an officially sanctioned event. Once there, we discreetly prepared our beers, assured each other that it wasn’t that crazy, and let the fun and games begin.

Most beer mile competitors choose one beer, often a mass produced macro brand, and drink that for all four laps. Being champions of Massachusetts craft beer and all, we decided to go the unconventional route, selecting four different craft brews, all from the Bay State. For the first lap we elected to go with contract brewer Zelus, and its Long Run Apricot Pale Ale, marketed as a thirst-quenching beer designed for the active lifestyle. It hit the spot, and everyone’s first trip around the track went off without a hitch, but not without a case of the hiccups. 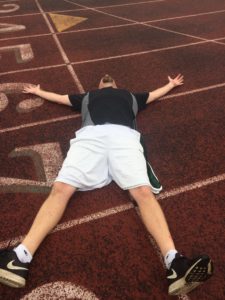 Big Pride finished first in our craft beer mile, but he was out of commission for the rest of the day.

For our second lap we selected the easy drinking House Lager from Jack’s Abby, which went down smoothly. Unfortunately, after chugging two full beers in less than five minutes, the built-up carbonation in our guts started to take it’s toll. Belching our way around the track, we arrived back at the cooler, reluctantly ready for a third go around. Clearly in need of replenishing our electrolytes, we reached for the salty brew, Who Is Keyser Gose? by Merrimack Ales, and gulped it down. We still don’t know who Keyser is, but his satisfying solution was just the pick-me-up we needed to get us to the home stretch.

Near exhaustion, our motivation waning, we needed some caffeine for the final lap. Ever prepared, we dug into the cooler and pulled out some Mocha Milk Stout from Mighty Squirrel, and prepared to “celebrate our mighty moment.” Down the hatch it went, though not without a fight. In retrospect, a protein-enhanced, desert-style beer, given we were already bloated beyond belief and still had to run another lap, may have been a mistake. Live and learn.

We broke no speed records, but eventually made it around a fourth and final time and ultimately reached the finish line, bonafide beer milers at last. We all finished within a minute of each other, but Big Pride crossed the line first in a respectable time of 14:42. He’s still recovering.

But seriously, we had a blast and actually did check another item off of our craft beer bucket list. We’re hoping to make it an annual event, so you should plan to join us next year. And let us know if you have a fun craft beer event you think we should take part in. We’re always up for a new adventure. Cheers.

*Note: none of the beers we consumed were provided by breweries, nor did they sponsor or sanction our event in any way. They were all pretty tasty, though.