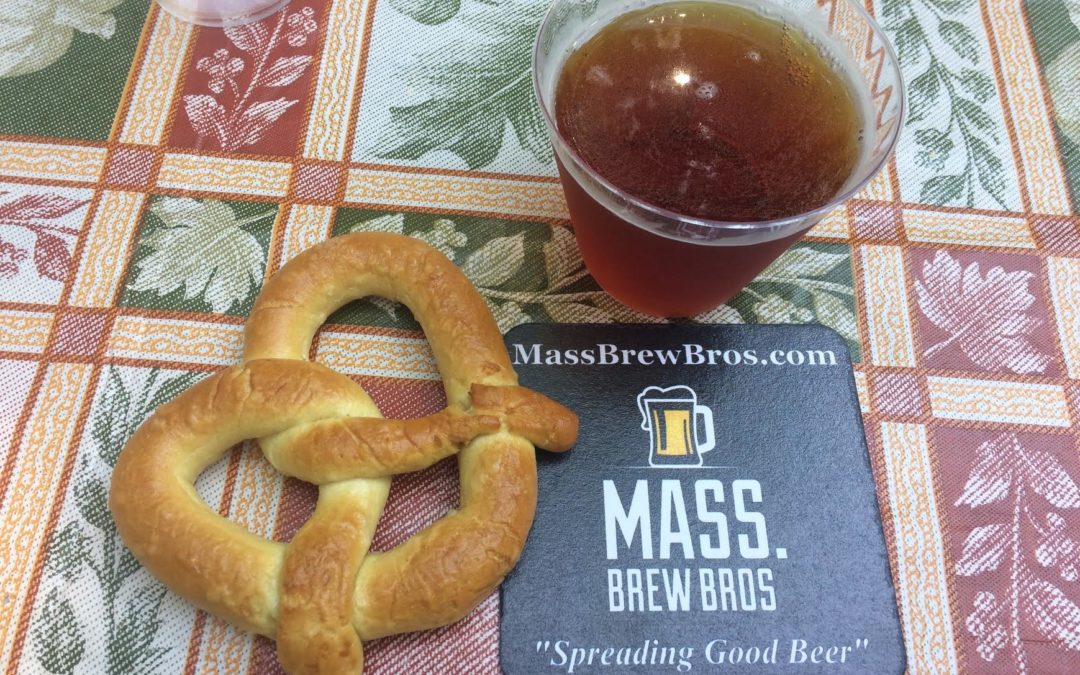 With Oktoberfest officially kicking off this Saturday, we figured you might be planning to indulge in some locally brewed versions of the popular German beer style known as Marzen, Festbier or Oktoberfest/Octoberfest in the coming weeks. So this past weekend we donned our lederhosen and gathered some of our craft beer friends to taste our way through 16 Massachusetts Oktoberfest style brews from around the state. Not surprisingly, they were all pretty tasty, and some of them were downright delicious.

A number were in the vain of a traditional Marzen or Oktoberfest Lager, but others were an American take on the style. As Tom Acitelli explains in a piece he did for Food Republic, “many American-made Oktoberfests are not Marzen beers because they’re Ales or they don’t use Munich malts or they’re too strong, or some combination of the three. Or they simply choose not to identify as a beer style many U.S. consumers might not recognize.” If you haven’t yet recognized how satisfying this easy drinking style is, then take our word for it – it’s the perfect beer for the beginning of fall.

Our tasting format consisted of narrowing down our field of 16 Massachusetts Marzen or Oktoberfest style beers by dividing them into four different sampling groups, picking a winner from each, and eventually choosing our favorite. The beers came in a variety of vessels, including cans, bottles, growlers and crowlers, and all were acquired within the last couple of weeks to assure freshness. Our tasting panel was an eclectic group of craft beer friends old and new, many of whom you’re probably familiar with via social media. Among them were beer reviewers Zack Rothman (Raising the Barstool) and Ryan Braun (Hoppy Boston), blogger Greg Desrosiers (Bearded and Brewed), social media mavens Bethany Baker (Lipstick N Lager) and Jocelyn Bartlett (BostonJoc), and some of our favorite beer peeps including Barry Fradkin, Erika Faythe, Alex Giggey from the Boston Beer Bros, and Matt Parisi, better known as Captain Asshat on Instagram and well worth a follow.

Here’s how it all went down. Group one pitted Copper Legend from Jack’s Abby, Brocktoberfest from Idle Hands, an Octoberfest from Iron Duke, and Sam Adams Octoberfest against each other in a winner-take-all taste off. While all four were notable, Brocktoberfest advanced on its malty, well balanced, true-to-style flavor profile. Group two saw Wachusett Octoberfest, Castle Island Festbier, Cape Cod Beer Harvest German Alt Bier, and Brewery Silvaticus Oktoberfest square off for an opportunity to move into the final four. Ultimately, on the strength of its smooth drinkability and balanced finish, Harvest moved on.

Group three included Berkshire Brewing Company’s Life on Marzen, Harper Lane Brewery’s Septemberfest Ale, and Octoberfests from both Lefty’s Brewing and Harpoon. The clear winner in this contest was Life on Marzen, a traditional Marzen style lager, made with German hops and yeast, and aged for several months. Multiple tasters remarked that it had a notable aroma which reminded them of fall. The fourth and final group was made up of a Festbier from Barrel House Z, Steinbier from Night Shift, an Oktoberfest from home brewer Greg Bonzek of Jute Town Brewing, and a Marzen style Oktoberfest from Shovel Town Brewery. Citing its balance of light maltiness and clean hop bitterness, as well as it’s crushability, the panelists sent Shovel Town’s Marzen Style Oktoberfest through to the final. 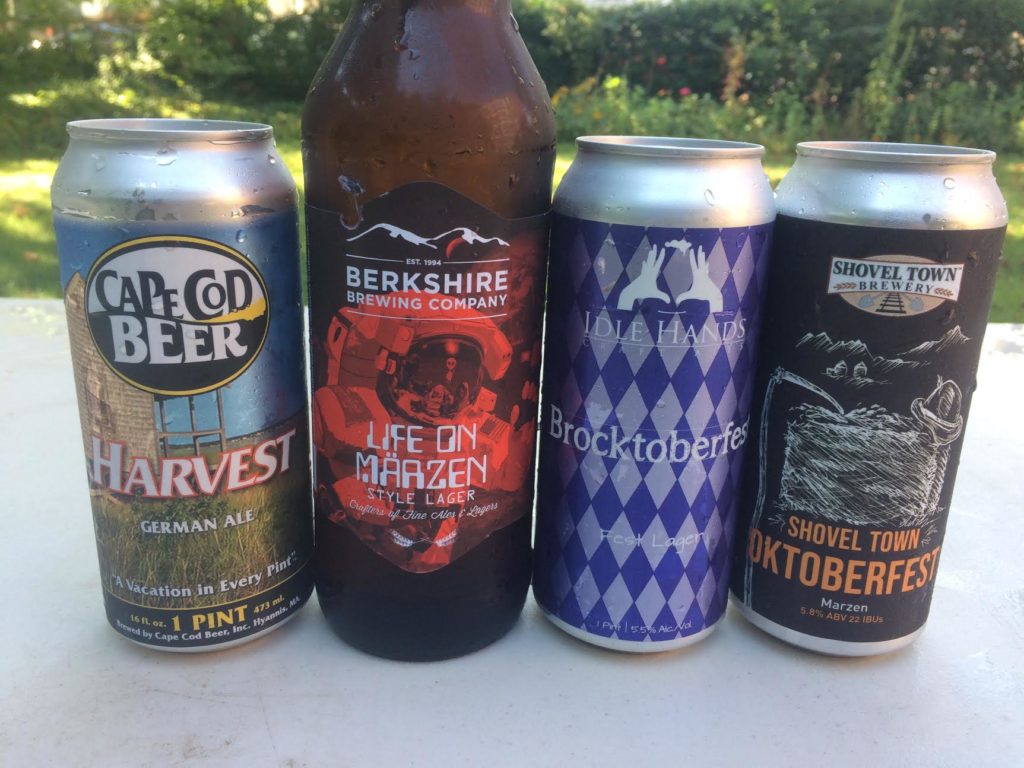 The final four consisted of Harvest from Cape Cod Beer, Life on Marzen from Berkshire Brewing, Brocktoberfest from Idle Hands, and Oktoberfest from Shovel Town Brewery.

In a fierce side-by-side taste off that pitted each of the initial winners, it was BBC’s Life on Marzen that stuck out among the finalists, with one even remarking that he could see himself wearing lederhosen and drinking a stein of it on a crisp fall day. Others noted its appealing copper color, earthy aromas, caramel richness, and that it was more dimensional and robust than its competitors. No wonder it made local writer Will Gordon’s round up of The 8 Best American Marzen (Octoberfest) Beers in VinePair. 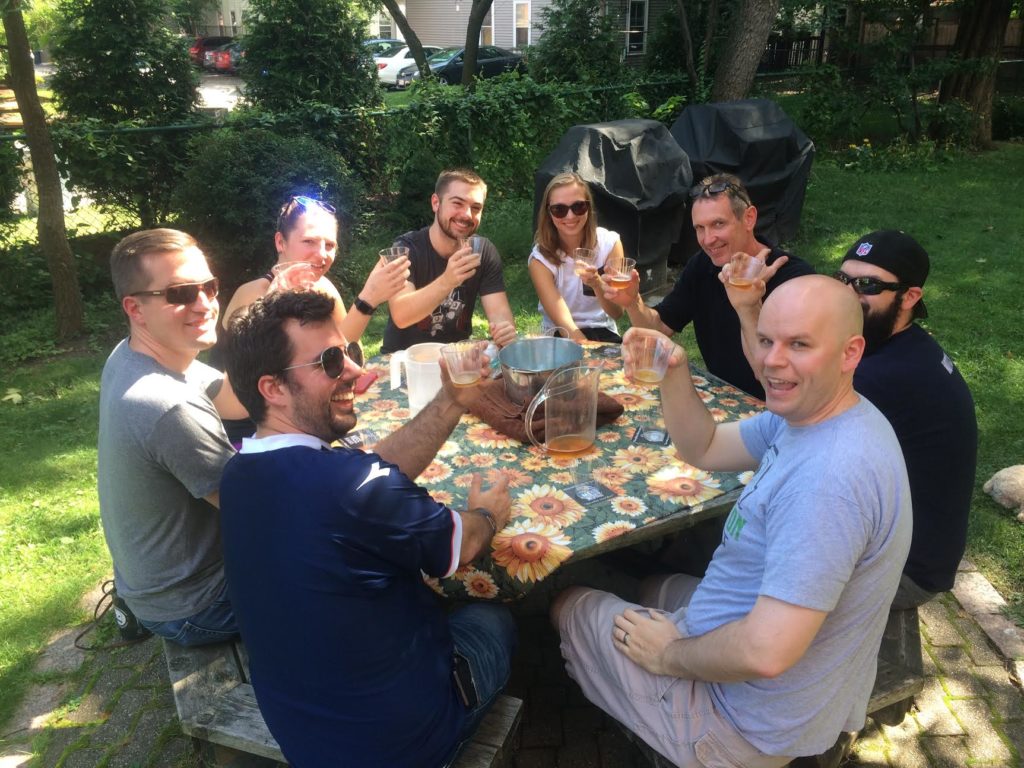 Some of our all-star tasting panel enjoying one of the 16 local Oktoberfest brews we sampled.

By no means should our results determine your favorite Oktoberfest brew this season. As we’ve noted many times before, the point of these blind tastings is to learn more about beer, sample some of the amazing local options we have here in Massachusetts, and have fun with the awesome community of craft beer drinkers in the Commonwealth. As taster and friend Greg Desrosiers writes in his latest Bearded and Brewed blog post, blind tastings are a great way to get past the branding, hype, and preconceived notions so you can appreciate and think more critically about what you like or don’t like about a particular beer. That way you can make your own informed judgements.