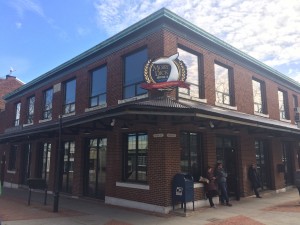 Moby Dick Brewing is located in the middle of New Bedford’s historic downtown.

With three more openings in the month of March, the number of visitable breweries in the Bay State has reached the century mark. The most recent, and 100th, was New Bedford’s Moby Dick Brewing, which opened last week in the city’s historic downtown district. The brewpub is the first full-service or “grain to glass” brewery to open on the South Coast in 18 years. Nearby Buzzard’s Bay Brewing, a farm brewery and taproom in Westport, had been the only brewer in the underserved region since 1998.

New Bedford’s new brewery received a warm welcome when it launched, just in time for St. Patrick’s Day, and had seven beers on tap ranging from a German style lager to a double IPA. Head brewer Scott Brunelle, whose impressive resume includes a pair of medals from the prestigious Great American Beer Festival, says he’s “looking forward to creating recipes, brewing fine beer, and talking to customers.” A fan of classic styles, Brunelle got his start at Braintree’s Brew Moon/Rock Bottom in the late 1990s, winning a South Shore Brewer of the Year award before moving on to Harpoon. He grew up in nearby Dartmouth and looks forward to mastering the brewery’s 10-barrel system and “brewing great beer in New Bedford.” 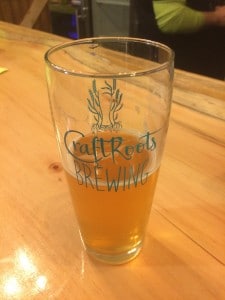 It was less than a week earlier that the Commonwealth’s visitable brewery count was pushed to the brink of 100 when Craft Roots Brewing debuted its new facility in Milford. After a yearlong hiatus, during which the small production brewery transitioned to a larger space, more than doubled production capacity, and added a spacious taproom, the “field to glass” operation re-launched on March 11th. Like Brunelle, Craft Roots owner/brewer Maureen Fabry is an industry veteran, including stints at John Harvard’s in Cambridge, Beer Works in Boston, and Berkshire Brewing in Western Mass.. In 2014, Fabry became the first woman in Massachusetts to launch a brewery since the closing of Rhonda Kallman’s contract brewery New Century in 2010. Among her initial offerings are a Blonde Ale, an Irish Stout, and the recently released IPAX2. 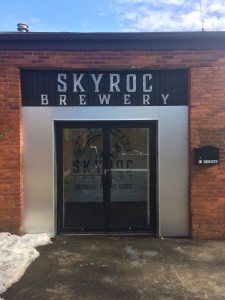 Skyroc Brewery in Attleboro is open Thursday through Saturday.

The first in the busy month of brewery debuts occurred at Skyroc Brewery in Attleboro, who opened its doors on the first Saturday of March to the delight of local craft beer fans. Their sizable taproom was busy when we visited on a recent Saturday afternoon. The husband and wife team of Nathan and Tracy Cinelli, proud Attleboro residents, made us feel right at home, as did the brewery’s friendly neighborhood vibe. Nathan was cranking out an impressive variety of brews on the shiny new 7-barrel system, including a coffee stout, an experimental batch of smoky amber ale, and a couple of IPAs. Look for a tasty new double IPA, which we were lucky enough to sample, to be on tap soon. They hope to be canning some of their offerings by the time the warm weather rolls around, and they plan to book food trucks on Saturdays. For now, patrons are welcome to bring their own food.

Judging by these three new breweries, 2017 promises to be a great year for local craft beer. We’ll tell you all about the likely unfolding of a record year for brewery openings and expansions in a future blog. Until then, get out there and visit some of the newer ones. Cheers.