This “blended” New England Rye IPA marries a barrel-aged Imperial Rye Ale with a New England Rye IPA, both brewed with WhistlePig’s own estate-grown Rye. “Barrel-Aged IPAs” can be a tough concept to nail. While time is a friend of barrel-aged beers thanks to greater transfer of flavor from the wood, it is the enemy of IPAs as aging hop oils break down and lose potency. To remedy the situation and create a perfectly balanced liquid, Harpoon elected to brew two base beers and blend them together. 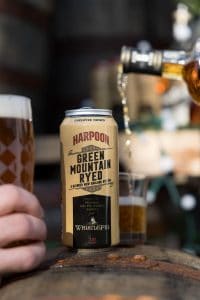 “The history of blending barrel-aged beers goes back centuries, but we’ve never heard of a beer like this that balances barrel and hops so perfectly,” said Dan Kenary, CEO and co-founder of Harpoon Brewery. “While working with WhistlePig on this latest release, we wanted to challenge ourselves to create a barrel-aged beer that still drank like a New England IPA. The result is both flavorful and complex – and hopefully gives hop fans and whiskey drinkers something to enjoy together this holiday season.”

To create this unique brew, a high-gravity Rye Ale was aged in freshly emptied WhistlePig PiggyBack 100% Rye barrels for 12 weeks, capturing the true essence of whiskey made from 100% Rye. Harpoon then brewed a fresh, heavily dry-hopped New England Rye IPA featuring some classic citrus-heavy hops. After the barrels were emptied, the two were blended into one beer in a 35 aged/65 fresh ratio. The resulting 7% ABV hazy IPA achieves the best of both worlds with super refreshing citrus and tropical fruit notes accompanying that warming, comforting rye whiskey spice.

“We had worked with Harpoon to craft barrel-aged beers in the past, but it was a unique challenge to pick the right barrel for something like a hazy IPA. Our PiggyBack 100% Rye Whiskey is made with a mashbill of 100% Rye and has these wonderful notes of both citrus and spice that seemed like a great pairing for tropical or citrusy hops. We couldn’t be happier with Green Mountain Ryed – it’s a one-of-a-kind take on a barrel-aged beer that managed to not sacrifice any of the fresh hopped flavor of the IPA while gently layering in the spice and oak of 100% Rye Whiskey,” said Meghan Ireland, Whiskey Blender at WhistlePig.

Harpoon’s Green Mountain Ryed is a limited release for the month of November and will be sold in 4-packs of 16 oz. cans. It will also be available on draft starting this month at Harpoon’s Boston and Vermont breweries. Visit www.harpoonbrewery.com to learn more.

Founded in 2007, WhistlePig has become the #1 distiller in the ultra-premium and luxury Rye Whiskey category in North America, featuring the bold and often untapped flavor of Rye. WhistlePig is leading a surge of innovation in the emerging field of North American whiskey. As the most decorated Rye whiskey – having received the coveted ‘Best in Show Whiskey’ title from the 2017 San Francisco World Spirits Competition, WhistlePig is widely viewed as the world’s finest Rye. With the opening of its distillery on its 500-acre Vermont farm in the fall of 2015, WhistlePig has also become one of the leading farm-to-bottle Rye whiskeys in the world.