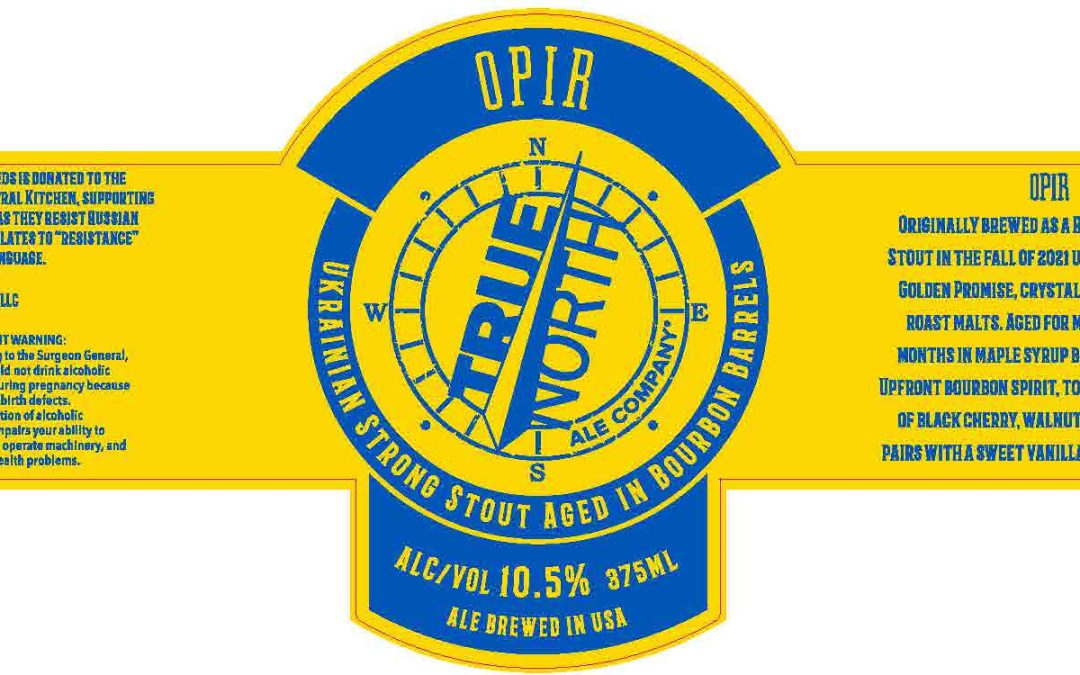 In support of the people of Ukraine

PRESS RELEASE / November 10, 2022 (Ipswich, MA) – True North Ale Company has released OPIR Ukrainian Strong Stout to raise funds in support of the people of Ukraine. Originally brewed in the classic style of a Russian Imperial Stout, that reference was abandoned last February. The word “opir” means “resistance” in the Ukrainian language. We stand with all Ukrainians in their resistance to oppression.

OPIR Ukrainian Strong Stout was aged for months in maple syrup bourbon barrels. Upfront bourbon spirit is followed by notes of black cherry, walnut, and cocoa nibs. The finish is sweet vanilla and maple syrup. At 10.5% ABV, OPIR is a big beer, meant for thoughtful sipping.

OPIR is available exclusively at the True North Ales Taproom, on tap and to-go in 375 ml Belgian-style bottles. A portion of the proceeds of each sale will go to World Central Kitchen to support its good work in feeding those affected by the war in Ukraine.

True North Ale Company is located in Ipswich, Massachusetts. Opened in 2017, its beers have been poured in more than nearly 1,700 bars and restaurants and sold in a like number of stores in Massachusetts, Rhode Island, and New Hampshire. The brewery has won major international awards, to include a Gold Award at the 2018 World Beer Cup and Gold, Silver and Bronze Medals at the 2020 and 2021 Great American Beer Fests. It was voted Best Brewery on Boston’s North Shore four consecutive years by the readers of North Shore Magazine. Its North Shore location features 200+ seat open-air and tented patios and 200+ seat indoor seating. The events venue, The North Side, may host events with more than 250 guests.