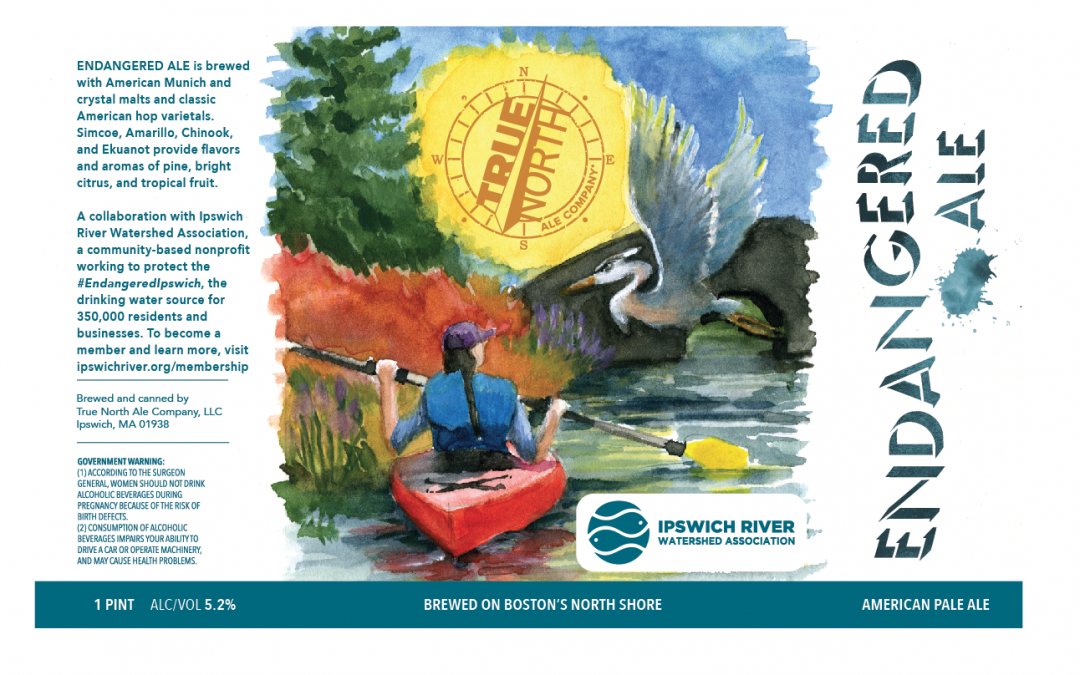 PRESS RELEASE / September 23, 2021 (Ipswich, MA) – True North Ale Company, in collaboration with Ipswich River Watershed Association, has released ENDANGERED ALE, a limited-edition American Pale Ale. The beer is aggressively hopped with Simcoe, Amarillo, Chinook, and Ekuanot to provide flavors and aromas of pine, bright citrus, and tropical fruit. The Ipswich River, source of brewing water for True North Ales, ten other local craft breweries, and 350,000 residents in the watershed’s thirteen cities and towns, was designated one of the Most Endangered Rivers in the country by the national group American Rivers (endangeredrivers.americanrivers.org). To learn more about the conservation efforts that IRWA has directed to support our river, visit ipswichriver.org/endangered/#state-solutions.

ENDANGERED ALE American Pale Ale will be available for a limited time on tap and in four pack cans at the True North Ales Taproom. Label artwork was created by noted Marblehead artist Amy Hourihan. Let’s all do our part to save the endangered Ipswich River.

True North Ale Company is located in Ipswich, Massachusetts. Opened in 2017, its beers have been poured in more than 1,300 bars and restaurants and sold in more than 1,400 stores in Massachusetts, Rhode Island, and New Hampshire. The brewery has won major international awards, to include a Gold Award at the 2018 World Beer Cup, Gold and Bronze Medals at the 2021 Great American Beer Fest, and a Silver Medal at the 2020 Great American Beer Fest. It has been voted Best Brewery on Boston’s North Shore four consecutive years. Its North Shore location features 150+ seat open-air and tented patios and 200+ seat indoor seating. The events venue, The North Side, may host events with more than 250 guests. TrueNorthAles.com

Ipswich River Watershed Association is a community-based nonprofit located on the North Shore of Massachusetts. For the last 40 years, the group has worked at the individual, local and state levels to protect the #EndangeredIpswich River, the main drinking water source for more than 350,000 people and businesses. Each year, thousands of members visit their Riverbend headquarters to paddle with family and friends, and support the organization in building out science-based solutions to protect public health and the environment. To join as a member and start paddling, visit IpswichRiver.org

Q. “How exactly does this partnership support the Ipswich River?”

A. “Awareness raising is a huge benefit of the partnership. Also, True North Ales plans to donate a portion of all proceeds from the sale of its Endangered Ale to support the Ipswich River Watershed Association. True North Ales will make the can label open source so that other participating craft breweries may customize the label for their use. It is expected that each of them will donate to the cause. To date, we have received commitments from 10 breweries and we look forward to hearing about their initiatives soon. Customers who visit the True North Ales taproom in Ipswich can learn about joining the IRWA as members and receive invitations to special events throughout the year.”

Q. “Besides drinking beer, how can I get involved in this campaign?”

A. “Ipswich River Watershed Association has developed solutions at all levels — individual, municipal, and state. To learn more about what you can do to help implement these problems or to join them as a member, visit ipswichriver.org/endangered.”

Q. “What is the Most Endangered Rivers® designation?”

A. “Each year, the national group American Rivers profiles 10 places in the country where communities are partnering up to save endangered rivers. For 36 years, the America’s Most Endangered Rivers® report has sounded the alarm about rivers facing urgent threats, spotlighting critical upcoming decisions and mobilizing public action. To learn more visit endangeredrivers.americanrivers.org.”

Q. “When will Endangered Ale be released and where will I find it?”

A. “Endangered Ale will launch on Saturday, September 25 with an informal launch party at the True North Ales taproom. The party begins at 5pm following the Ipswich River Watershed Association event, Save the River Day at Riverbend (ipswichriver.org/events/). Both the event and the launch party are open to the public. Endangered Ale will be available at the True North Ales taproom on draft and in cans to go. Other participating breweries will sell from their taprooms in future weeks.”

Q. “There are eleven breweries in the Ipswich River watershed brewing with water from the river. Are others also involved in this initiative?”

A. “Yes. Though it is still quite early, as the project is just now being launched, ten breweries have committed to brew Endangered Ale and support the IRWA. Those breweries are:

Announcements of their plans to brew and release Endangered Ale will come in the future.“