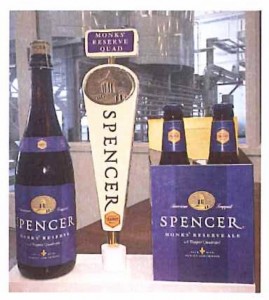 Spencer Monk’s Reserve Ale is fragrant, robust and full bodied, mahogany in color and crowned with a dense, tan, frothy head. Its malt-forward profile yields to a warm finish, with an ABV of 10.2%.
The recipe development phase of this Quad stretched over three years and 13 experimental brews. The Spencer monks sought an alternative to the use of spices for flavor enhancement by pushing the boundaries of traditional Trappist Quad malt profiles, even incorporating some local barley grown in nearby Barre, MA, which was craft malted in Hadley, MA. The outcome is a unique product with a distinct flavor profile well suited within the Trappist family of Quadrupel ales. Spencer Monks’ Reserve Ale received the approval of the International Trappist Association in March 2017.
In announcing Spencer Monks’ Reserve Ale, Father Isaac Keeley, Spencer Brewery Director, notes, ” It is a major event for a Trappist brewery to introduce a new Quad. We took our time developing this one and we are rather happy with the result.”
Spencer Monk’s Reserve Ale will be available for public tasting in the U.S. at the BeerAdvocate Microbrew Invitational at the Seaport World Trade Center in Boston on June 2-3, 2017. Spencer Monks’ Reserve Ale will be available to our distributors on June 12th and at retail shortly thereafter. It will be featured at The Spencer Brewery’s Open House on June 24th, 2017.