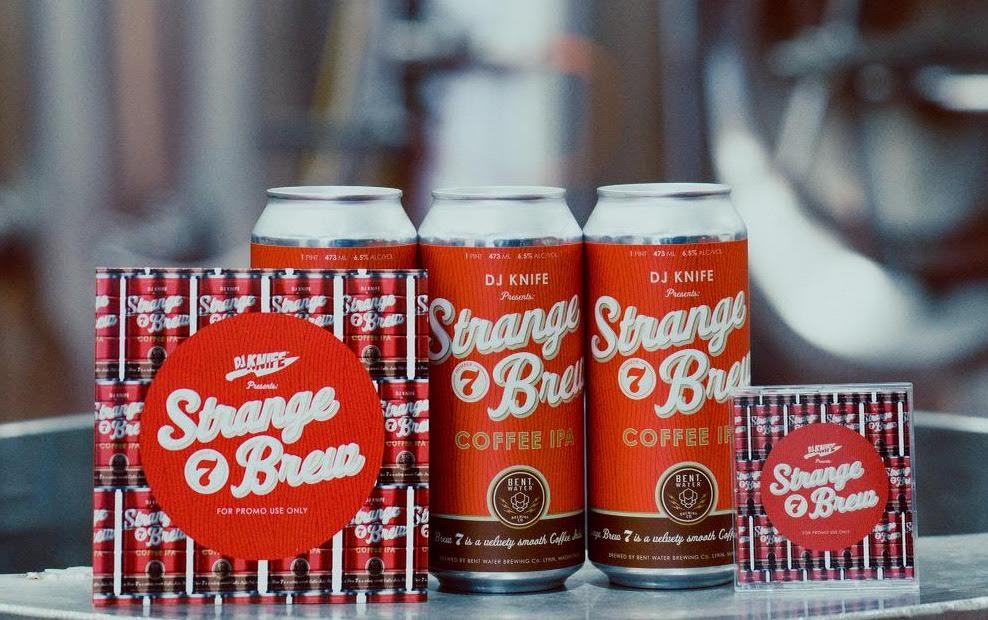 PRESS RELEASE DECEMBER 15, 2020 (MASSACHUSETTS) – DJ Knife has found a new home for his beer and musical-mix series in the city of Lynn, with Bent Water Brewing Company.

Strange Brew 7 is a 1-of-a-kind partnership between a brewery and a DJ.

The beer blends together fruity, bright coffee beans from La Pradera farm in Columbia with a juicy, citrusy New England IPA that is packaged together in a sleek design accompanying a play-list curated by one of Boston’s top beat selectors.

“Coffee and New England IPAs are two things that I love. On a trip to Japan a few years back I encountered an IPA infused with coffee. It was strange, but delicious,” said Adam Denny Golab, Head Brewer at Bent Water Brewing Co. “When asked to make a beer inspired by a mix tape named Strange Brew, I immediately thought of that beer. Bringing together a juicy New England IPA with some bright, fruity coffee would make the fruit notes pop while the roasted coffee notes would add a twist to the finish of the beer.”

Sound-wise, the mix continues the tradition of trying to combine as many musical genres in just under an hour’s time, from Baile Funk, to House, to Jungle and more, in a cohesive manner.

To make things even weirder, Strange Brew 7 will be released in physical format with a choice of “Vinyl CD” or “MiniDisc” (yep, THAT forgotten format) and will be free with purchase of the Beer (*while supplies last). There will also be an online version of the mix if you don’t feel like coughing up a significant chunk of change to purchase a MiniDisc player off eBay.

Along with other analog musical formats once considered to be dead, in recent years MiniDisc has surprisingly begun to make a comeback; with a select few artists putting out the miniature CDs for their artistic merit. Strange Brew 7 aims to do the same combining velvety red artwork matching the disc packaging and can to create a collector’s item.

Knife hopes that the unique product along with a hashtag will simultaneously help spread the mix online and put MiniDiscs back on the map.

A virtual release party is schedule for Saturday December 19th at 7 pm at: https://www.twitch.tv/hidjpodcast

Strange Brew 7 will be a limited release, with cases hitting select stores around Greater Boston soon.

Customers can take a picture of their beer purchase and tag  @djknife and #StrangeBrew7 and Knife will send them a physical copy of the mix in the (postal) mail *while supplies last.

In addition, Knife will be safely delivering special SB7 packages to people across the city throughout the rest of the year in hopes of making a splash with this latest installment of the series.