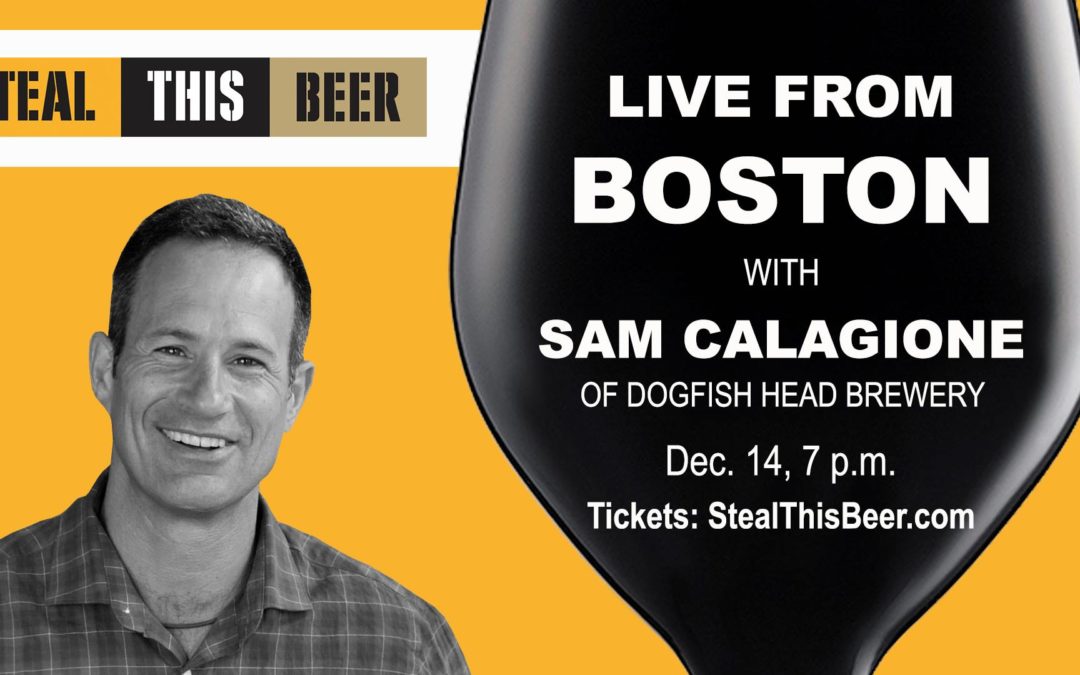 The award-winning podcast Steal This Beer invites enthusiasts to drink along with the hosts and special guest Sam Calagione of Dogfish Head during a broadcast on Friday, December 14.

PRESS RELEASE / December 4, 2018 (New York, NY) — Steal This Beer, the award-winning podcast hosted by Augie Carton and John Holl, is coming to Boston on December 14, 2018 for a special broadcast that will let the audience taste along blind during the show.

The podcast, founded in 2015, is a weekly candid conversation on what beer is, not what we thought it would be. Guests bring two beers with them on the show and without telling the hosts what the beer is, they are served samples in opaque glasses, making the tasting process challenging but entertaining.

For the live audience show, Sam Calagione, the founder and creative force behind Dogfish Head Ales will be the accomplice for the evening. This is only the second time that Steal This Beer has invited an audience to attend a taping and those who purchase tickets will receive a black glass and the opportunity to taste along blind during the show.

“Boston is a great drinking town and we’ve definitely gotten up to some good trouble in the past,” says Augie Carton. “An opportunity to drink with Sam and discuss craft is something I know I love and our audience has told me they’d like to do many times. Here it is.”

Tickets are now available but going quickly. The show starts at 7 p.m. at the new Sam Adams Boston Tap Room on Friday, December 14.

“With two creative and artistic guys like Sam and Augie on the stage this is going to be a cool opportunity to hear brewers who continuously push limits of flavors while challenging drinkers to think about beer in new ways,” says John Holl. “From serious IPA lovers, to homebrewers, or just casual beer drinkers, this is going to be a chance to enjoy the beer experience while downing pints with some great brewing minds.”

Tickets are available at http://www.stealthisbeer.com/merch/

About Steal This Beer: Beer gurus Augie Carton (Carton Brewing) and John Holl (Craft Beer & Brewing Magazine) get to the bottom of the day’s most pressing craft beer issues with help from opinionated brewer friends, know-it-all barkeeps, and smarmy industry insiders. For each episode, Augie and John will blind-taste and dissect two beers on air (provided by that episode’s guest) while discussing current beer topics, news, and styles. Online at StealThisBeer.com