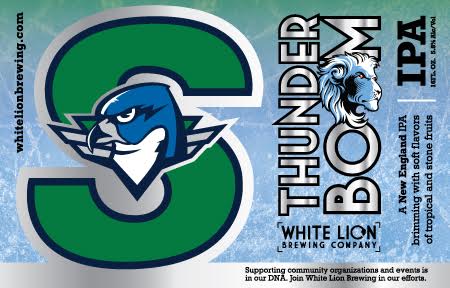 PRESS RELEASE / December 12, 2019 (SPRINGFIELD, MA) – On Thursday, the Springfield Thunderbirds and White Lion Brewing Company announced that the two will partner to produce a special, limited edition can design for White Lion Thunder Boom™, available in select locations – including the MassMutual Center – beginning Friday, Dec. 13 and through the Thunderbirds’ “Blast from the Past” Night on Sat., Jan. 11, while supplies last.

The design incorporates a melding of the “old” and the “new” in Springfield hockey – the current iteration of the Thunderbirds logo rests inside the iconic “S” that was a centerpiece to Springfield Indians jerseys for decades.

The history of hockey in Springfield dates back to 1926 with the introduction of the Springfield Indians to the Canadian-American Hockey League.  Though the Indians’ name was discontinued before the start of the 1994 season, its history left a lasting legacy. In January of 2018, the Thunderbirds established their annual “Blast from the Past” night, in which the first Saturday game against the Providence Bruins in the New Year could serve as a means of honoring Springfield’s historic hockey past. Over the first two annual evenings, the Thunderbirds have worn the classic design worn by the Hartford Whalers’ affiliates in Springfield (blue and green). This season, for the first time, the Thunderbirds will don the orange and blue jerseys reminiscent of the Indians’ affiliation with the New York Islanders. At the same time, the jerseys will celebrate the 30th anniversary of the Indians’ 1989-90 Calder Cup championship.

In 2018, the Springfield Thunderbirds in partnership with White Lion Brewing created the city of Springfield’s hometown beer affectionately named Thunder Boom™. The retro labels will come in two sets of colors, each paying homage to prior iterations of the Springfield Indians when they were affiliated with the NHL’s New York Islanders (blue and orange) and the Hartford Whalers (blue and green).

“With two growing brands embracing the city of Springfield sharing similar values, it made sense for White Lion and the Thunderbirds to collaborate and work with each other,” said White Lion Brewing Company general manager Ray Berry. “The name of the partnering craft beer incorporated the strength behind the word ‘Thunder’ and affectionately added ‘Boom’ from Boomer, the team mascot.”

“The collaboration with White Lion Brewing around Thunder Boom™ has been exactly what we were looking for – branding and exposure with a local craft brew that exemplifies the same values we do as an organization,” said Thunderbirds President Nathan Costa. “Our annual throwback night featuring a nod to our history, specifically the Indians brand, has been so successful we felt this type of special offering made too much sense, and we’re thrilled to be able to offer these one-of-a-kind cans for a very limited time.”

Though Thunder Boom™ IPA is available statewide, the retro label will be available for purchase exclusively at the MassMutual Center during Springfield Thunderbirds home games, as well as at Table & Vine in West Springfield and Liquors 44 Springfield Lowes Plaza while supplies last.

“At Table & Vine, we are happy to partner with yet another community enterprise, White Lion Brewing and Springfield Thunderbirds,” shared Big Y executive Steve Thibault.

“We care about our community and building a strong, vibrant environment for each other and our valued customers,” said Liquors 44 owner John Biela.

White Lion, the first craft beer brand to go to market in Springfield, Massachusetts, the company has all of the necessary ingredients for a successful, sustainable future: A compelling brand, a smart plan for growth, and a commitment to being a vital part of the city’s renaissance.  More than a brewer, White Lion intends to serve as a catalyst for Springfield’s revitalization. 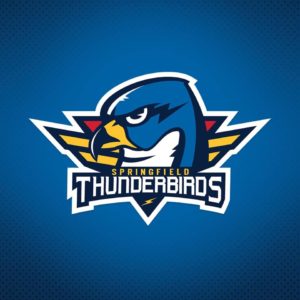 About The Springfield Thunderbirds

The Springfield Thunderbirds are an American Hockey League professional ice hockey franchise that began play for the 2016–17 season as the affiliate of the National Hockey League’s Florida Panthers. Based in Springfield, Massachusetts, the Thunderbirds play their home games at the MassMutual Center. Over their history, the Thunderbirds have captured numerous awards for business growth, including three consecutive honors for growth in season tickets.