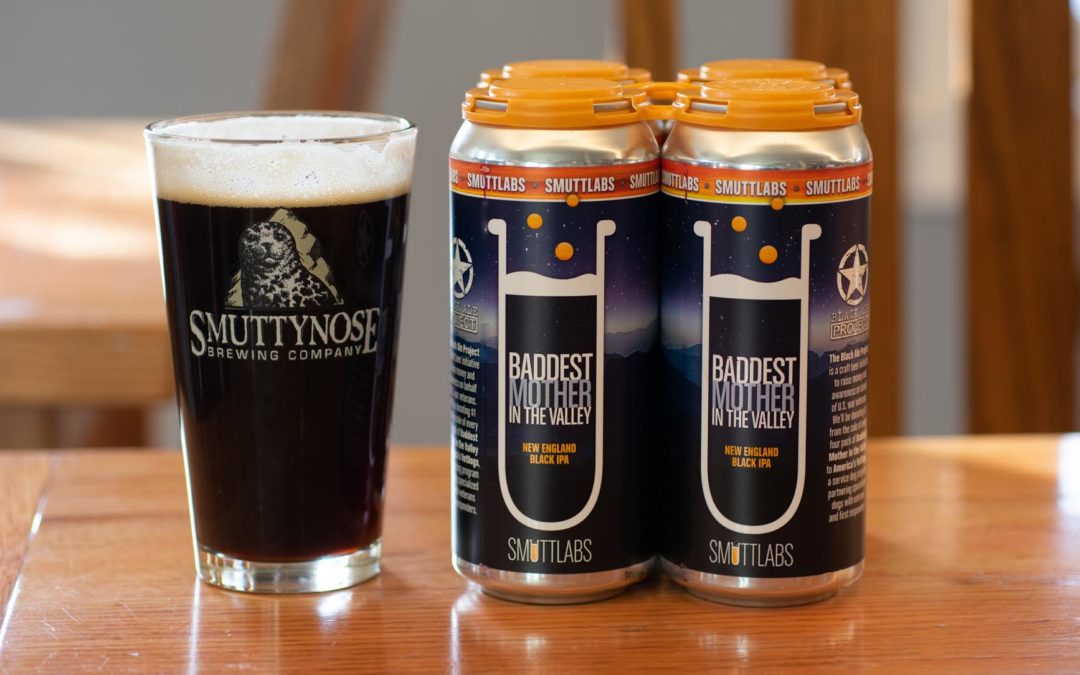 PRESS RELEASE / November 13, 2018 (Hampton, NH) — On November 17th, Smuttynose Brewing Company shows its support for local veterans by holding an event that honors vets for their service and celebrates a Black Ale Project and Smuttlabs beer collaboration. Smuttynose Brewing Company’s newest beer release, Baddest Mother in the Valley, is a New England Black IPA brewed alongside Dave Pappas, founder of The Black Ale Project. Baddest Mother is a limited-edition Black IPA. Our black IPA uses dark malt and Sinamar to achieve its luscious dark color without losing any of the delicious hop characters that are loved by hopheads.

The Black Ale Project is an initiative that raises money and awareness on behalf of U.S. war veterans. Smuttynose will be donating $1 of every four-pack of beer sold to America’s VetDogs, a charity that “trains and places service dogs for those with physical disabilities; guide dogs for individuals who are blind or have low vision; service dogs to help mitigate the effects of post-traumatic stress disorder; hearing dogs for those who have lost their hearing, and facility dogs as part of the rehabilitation process in military and VA hospitals.”

On November 17th, Smuttynose will hold a “Smuttynose Honors Veterans” event from noon to 4pm. Pappas, a veteran himself, will perform the ceremonial first pour of the day. The event will take place outdoors, rain or shine, in the Finestkind Trailer Park at Smuttynose Brewery. A representative from the Hampton American Legion will be at the event, and America’s VetDogs will be there for the celebration with a few puppies-in-training for guests to meet. Guests are also encouraged to ask questions and interact with the trainers. Other local veteran based organizations will be in attendance as well.

For nearly twenty five years, our mission here at Smuttynose has remained the same: to brew the best beer we can in a way we can be proud of. That includes honoring New England’s rich beermaking history, respecting our environment, and playing an active role in our community.

We value creativity, quality, authenticity and sustainability, but it really boils down to making great beers to enjoy with friends and family. We hope you love drinking our beers as much as we love brewing them. Cheers!

About the Black Ale Project

Dave Pappas is partnering with breweries across the country to support the Black Ale Project, a craft beer initiative to raise money and awareness on behalf of U.S. war veterans. As a former active duty Marine and non-combat veteran of the Persian Gulf War, supporting our war veterans is a cause that means a lot to Dave. The Black Ale Project itself isn’t a charity organization but an idea he came up with to help veterans in need.

Each Black Ale Project beer is brewed by a different craft brewery, with no two beers being exactly the same. For breweries that do not bottle and/or can their beer (or choose not to for the Project), the beer they brew in support of the Black Ale Project is poured in their taproom until it sells through. Dave does not handle the money at any time during the process; the funds are donated directly by the brewery to a veteran charity of the brewery’s own choosing.

Please click here for a list of breweries that have brewed beer for the Black Ale Project so far, as well as breweries that are on board to release beer in the future. Dave is continually speaking with breweries about joining the cause and their names will be announced as they are confirmed.