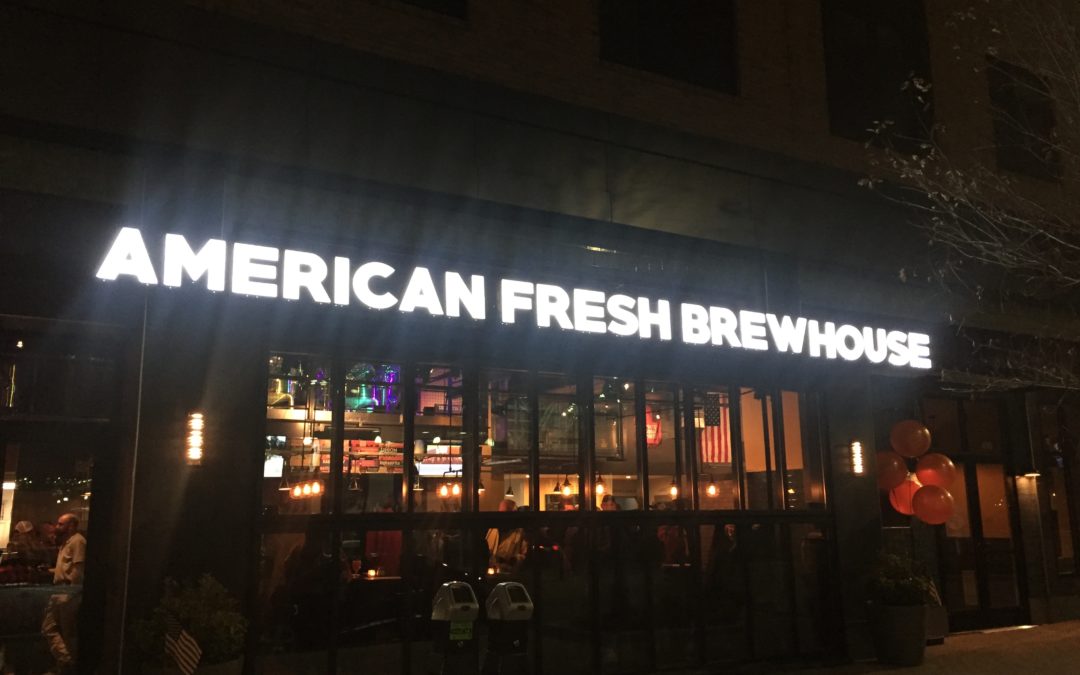 Somerville Brewing Company, known by most as Slumbrew, will debut a second American Fresh Brewhouse location today. Once a contract brand, they opened a beer garden at Assembly Row in 2014 (which they closed earlier this year), then a brewery and taproom on Ward Street in 2015, and today unveil what they describe as a gastropub at another Assembly Row location, 490 Foley Street.

Although it’s called American Fresh Brewhouse, the same name as their Boynton Yards location, the new gastropub has a different feel. Though surrounded by an industrial aesthetic, it’s considerably more open and modern than its predecessor, with a spacious bar that surrounds the elevated brewing system. Come spring time, it will feature a sidewalk patio with outdoor seating in café tables under umbrellas. And while many of the 20 offerings on tap will be familiar, the three-barrel pilot system at the heart of its 3,600 square foot space will allow co-founder and brewer Jeff Leiter to experiment more. 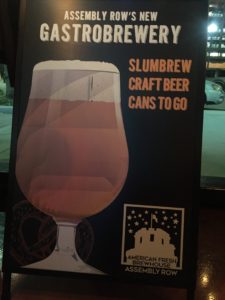 Like Boynton Yards, the Assembly Row brewhouse will sell beer to go in the popular 16-ounce can format.

Already known for pouring a range of unique styles and flavors, Assembly Row visitors will be treated to small batches of special experimental beers. “Time intensive barrel-aged beers or heavily hopped IPAs can be cost prohibitive when it comes to distribution,” co-founder Caitlin Jewel told us at the soft opening last night. “But now that Jeff can brew them on the pilot system and we can sell them right out of our brewhouse, it makes more economical sense, and patrons can drink them at their freshest.”

It’s not just the beer that has the potential to be even more adventurous. A state-of-the-art kitchen and a full-time chef at the new brewhouse will provide an equally exciting gastropub menu. Judging by the appetizers we were treated to last night, hungry shoppers and beer foodies alike should find the expanded food offerings to their liking.

Located across the street from Assembly Station on the MBTA’s Orange Line, the new American Fresh Brewhouse at Assembly opens today at 11:00.