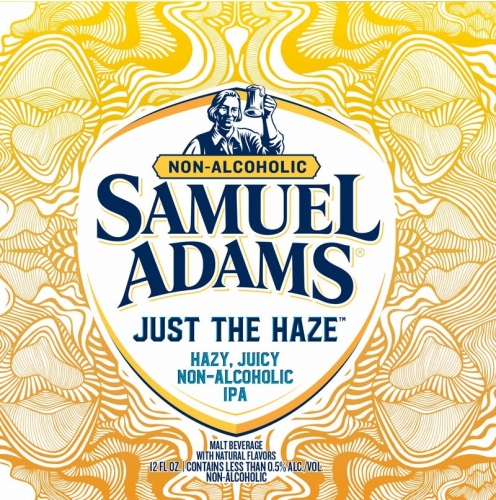 After two years of research and brewing, Just the Haze will hit store shelves in early 2021 promising an IPA’s full flavor, without the scale-tipping ABV

PRESS RELEASE September, 8, 2020 (Boston, MA) – In a move to bring beer lovers a craft non-alcoholic hazy IPA, Samuel Adams today announced plans to introduce Samuel Adams Just the Haze in 2021. Much like Samuel Adams led the craft beer renaissance more than 35 years ago, the American craft brewer is launching this beer to accelerate category growth and introduce drinkers to what a craft, non-alcoholic beer has to offer. Shaking up the non-alcoholic space with a full-flavor option, the announcement comes after two years of brewing work at the Samuel Adams Boston Brewery.

“I may have once said that we would never brew a non-alcoholic (NA) beer, but I’ve learned over the years never to say never,” said Jim Koch, founder and brewer of Samuel Adams. “The NA category has been both fascinating to watch and a unique brewing challenge that the Samuel Adams brewers have taken on with pride and ingenuity. I’m extremely proud to enter the NA race, and we’re ready to take it to the top.”

Samuel Adams brewers were uncompromising in their pursuit to develop an NA beer that has the complexity, balance, and full-flavor of a high quality IPA. Consulting with the best brewers and brewing scientists globally, including those at Germany’s Weihenstephan, a renowned beer institute that is also the world’s oldest brewery, Samuel Adams brewers invested time and resources into the brewing challenge that is non-alcoholic beer, testing and evaluating everything from hops, malt, yeast strains and other ingredients as well as state-of-the-art technologies. 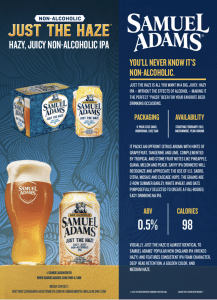 Christina Hahn, manager for brewing research at Samuel Adams said, “We’ve kept a close eye on the international non-alcoholic beer space for years, recognizing its significant growth as a wellness option, and we saw the opportunity for a full-flavor craft version in the U.S. It’s no secret that it’s a challenge to remove the alcohol from beer without losing the rich, complex and balanced flavors of craft beer. We visited some of the best NA breweries in the world to learn more about the existing technology; we reviewed hundreds of yeast strains; and we brewed countless iterations before arriving at what we, as brewers, believe is an uncompromising world class IPA.”

Just the Haze packs an upfront citrus aroma with hints of grapefruit, tangerine and lime, complemented by tropical and stone fruit notes like pineapple, guava, melon and peach. Samuel Adams Just the Haze will begin its national roll-out in early 2021, line priced to Boston Lager. It will be available exclusively in 12-ounce cans, sold in six packs, and single cans.

Samuel Adams Boston Lager is a leading independent, American craft brewer that helped to launch the craft beer revolution. The brewery began in 1984 when Founder and Brewer Jim Koch brewed a generations-old family recipe in his kitchen. Inspired and unafraid to challenge conventional thinking about beer, Jim brought the recipe to life believing drinkers would appreciate the complex, full-flavor lager, and he went bar-to-bar in Boston sampling his beer.
He named his flagship brew Samuel Adams Boston Lager in honor of one of our nation’s founding fathers, a revolutionary man of independent and pioneering spirit. Today, Samuel Adams is one of the world’s most awarded breweries and remains focused on crafting the highest quality beers through innovation and experimentation in the relentless pursuit of better. Samuel Adams continues its dedication to elevating and growing the American craft beer industry overall, including providing education and support for entrepreneurs and fellow brewers through its philanthropic program, Brewing the American Dream, which helps others pursue their American Dream. For more information, visit www.SamuelAdams.com.