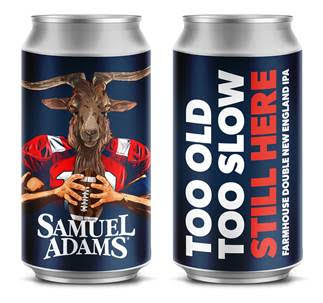 PRESS RELEASE / January 29, 2019 (Jamaica Plain, MA) – For the third year in a row, big game weekend is upon us in Boston! To celebrate, Sam Adams is releasing a beer as dynamic and exceptional as our hometown team. Too Old, Too Slow, Still Here – a farmhouse double New England IPA – will be sold in a limited number of crowlers and available on draft in the Boston Brewery tap room until the kegs are kicked, commemorating the greatest team of all time and the GOAT himself.

At 7.8% ABV, this New England style Double IPA is fermented with kveik, a heirloom farmhouse yeast that displays a variety of flavors and aromas like candied peach and pineapple that work together for a one-of-a-kind brew – just like our team has worked together to defeat the odds and shatter expectations all season long.

We love it when our teams give us a chance to celebrate, and we’re doing just that this Thursday. Quick details on the event are below.

What Jim Koch, founder and brewer, has to say:

“We’re behind New England Patriots 100% as they head to the big game. The best way we could think to honor the team was to brew a beer for fans that can’t make it to Atlanta and a New England style Double IPA with as much spirit as the players felt like the perfect beer. We haven’t doubted them all season and can’t wait to watch them on Sunday with a beer in hand that honors their hard work.”