Sam Adams Finally Opens A Taproom at its Boston Brewery 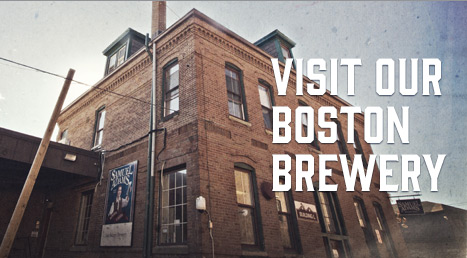 Boston, November 10, 2017 – Start planning the next happy hour and weekend tap room trip now, because today the brewers at Samuel Adams are opening the doors to their new Boston Brewery Tap Room. The brewery’s new construction expands the Sam Adams footprint in the historic Haffenreffer Brewery, a pre-Prohibition brewery originally built in 1871, with the addition of the Brewery Tap Room and a new Bier Keller for barrel-aging experimental beers.

Drinkers can visit the new Brewery Tap Room to enjoy a pint or flight of innovative styles from taps which will pour rotating experimental beers from the nano brewrery as well as fan favorites such as Boston Lager and seasonal brews like Winter Lager. When doors open on November 10th, drinkers will be the first to try the final recipe for the new Samuel Adams New England IPA, which rolls out to select cities and states this year and will be released nationally in 2018. Additionally, drinkers will be able to purchase crowlers of select beers on tap.

The Brewery Tap Room will serve as a meeting place for craft beer drinkers, local Bostonians, and visitors alike to sample new innovations and beers not available anywhere else as well as special events including trivia nights, food trucks, karaoke and more. The Tap Room is open to the public from 11:00 a.m. to 8:00 p.m. Monday through Saturday and closed on Sundays and major holidays.

“We’re thrilled that our Boston neighbors can join us at the brewery to enjoy pints of new and experimental Sam Adams brews – many of which are only available here at the brewery. I’m happy to finally say that the kegs are tapped and the perfect pints are ready to greet drinkers at our new brewery tap room.”

The Boston Brewery is home to Sam Adams’ research and development, which is expanding to include the opening of the Bier Keller. The space for the new Sam Adams Bier Keller, German for ‘beer cellar,” was historically used for cellaring beer during the days of the Haffenreffer Brewery. A dark and temperature-controlled climate, the Bier Keller has been reborn as the inner sanctum for aging experimental barrel-aged beers, allowing the brewers even more room to experiment and drinkers the opportunity to try samples of experimental brews on The Bier Keller: Samuel Adams Barrel Aged Experience.

Beers currently aging in the Bier Keller include experimental barrel-aged barleywines, oak-aged saisons, and scotch ales aging in scotch whiskey barrels, as well as Triple Bock, Double Bock, and Cinder Bock aging inside Utopias barrels. The barrels in the Bier Keller come from a variety of distilleries and wineries the previously aged Bourbon, White Carcavelos wine, Ruby Port, Sherry, Tequilla and more. The Bier Keller is separate from the original Samuel Adams Barrel Room, which will continue to be home to the development of barrel-aged sour beers like like Cosmic Mother Funk Grand Cruller, and is open to the public for Beyond the Brewhouse Experience.

Above the new Bier Keller space is a new tasting room called the “Pickwick,” which is named in honor of an ale made by the historic Haffenreffer Brewery. The Pickwick adds an additional tasting area to the two pre-existing tasting rooms which offer rotating experimental beers on tap for tours and special events.

To learn more about the Brewery Tap Room, Bier Keller, and other brewery experiences, visit: http://www.samueladams.com/brewey-and-craft/brewery-tours