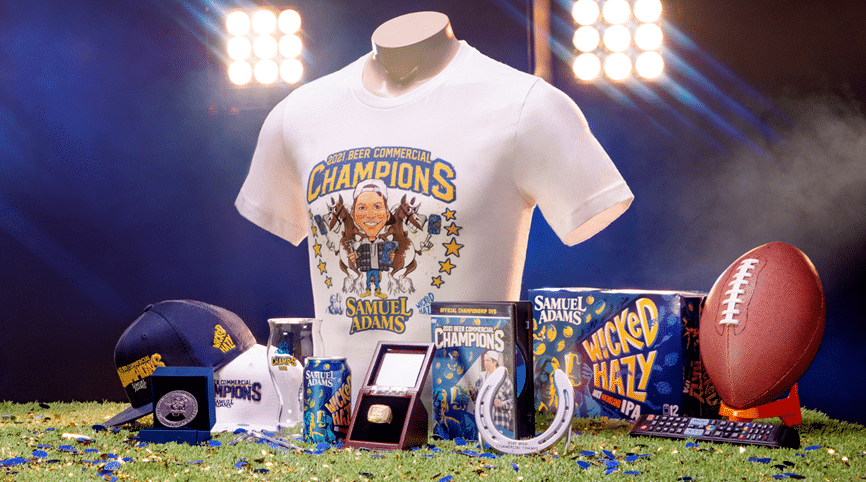 PRESS RELEASE / February 8, 2021 (Boston, MA) – The confetti was still falling at Raymond James Stadium when Sam Adams declared itself the “beer commercial champions” for the spot seen in New York and New England with Your Cousin from Boston releasing the Clydesdales. I guess you could say we put the cart before the horse with this crowning moment, but with over 7MM social media impressions, 5MM social video views and pre-game buzz valued at more than our entire big game spend, we’re pretty confident we left our mark.

In a cheeky spot running just after the game on Sunday on social and late night networks (Adult Swim, Comedy Central, MTV and VH1), Sam Adams is selling NFL-style merchandise commemorating its 2021 Beer Commercial Championship. A print ad (attached) will also run in the Boston Herald on Monday, February 8. 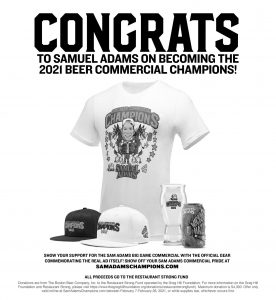 But it’s no joke: novelty hats, t-shirts, and glasses and more are really for sale at SamAdamsChampions.com. 100% of purchases will benefit the Samuel Adams Restaurant Strong Fund to support bar & restaurant workers impacted by COVID-19 closures. Sam Adams is contributing another $100,000 to the fund to keep the good going.