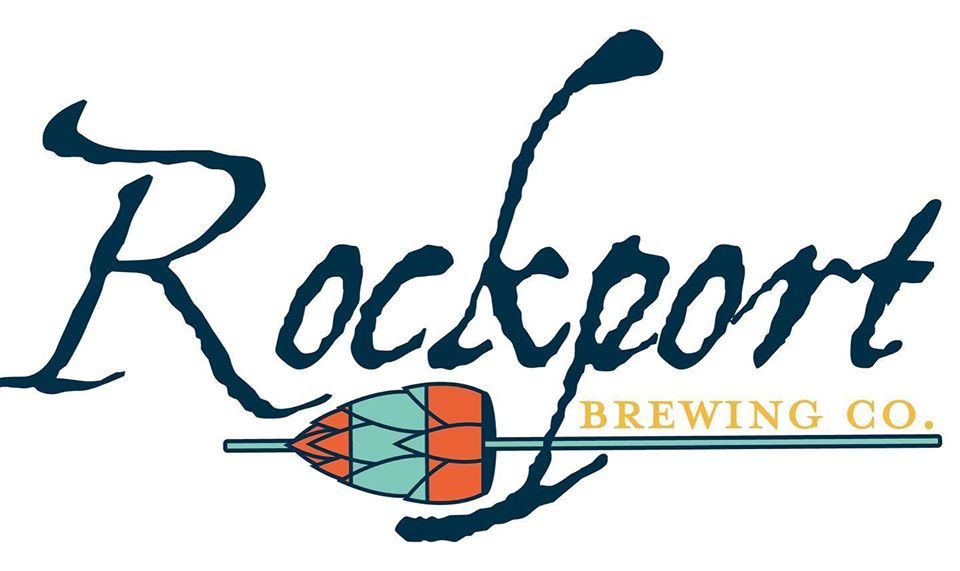 Visit Rockport for its lovely beaches, paths through woods and glades, and magical light that has inspired painters, boasts the town’s website. Just an hour north of Boston, it offers a romantic getaway, an exquisite dining opportunity, or a unique shopping experience. The only thing missing, thought locals Ray Pickup and his wife Jordana, was a craft brewery. So in 2016 they set out to change that. “At first it was sort of a joke,” says Pickup. “But once we began home brewing, and eventually started turning out some pretty tasty brews, we decided to go for it.” Now, just four years later, Rockport Brewing is set to release its first beer, with hopes of opening its own brewery and taproom in spring of next year.

After dialing in several recipes on a 1-barrel system in a shed he calls the test kitchen, Pickup started thinking about getting his beer to market. Not long after, following discussions with colleagues like Matt Smith, founder of contract brand Wandering Soul, Julian Miller, head brewer at Essex County Brewing, and the Rogers family at True North Ales, he decided to have his first few releases contract brewed while working through the red tape of getting his space zoned by the town. His first batch, a hazy session IPA brewed at RiverWalk Brewing, should be arriving at beer stores in late June. Called Hatchet, it’s a nod to the “Hatchet Gang” which raided Rockport drinking establishments during the temperance movement. The recipe features flaked wheat and oats with a blend of Centennial, Mosaic, Simcoe, and Vic Secret hops. Pickup will self distribute the 15-barrel batch of his debut beer to a number of North Shore liquor stores, as well as select locations on the South Shore and in Western Massachusetts. 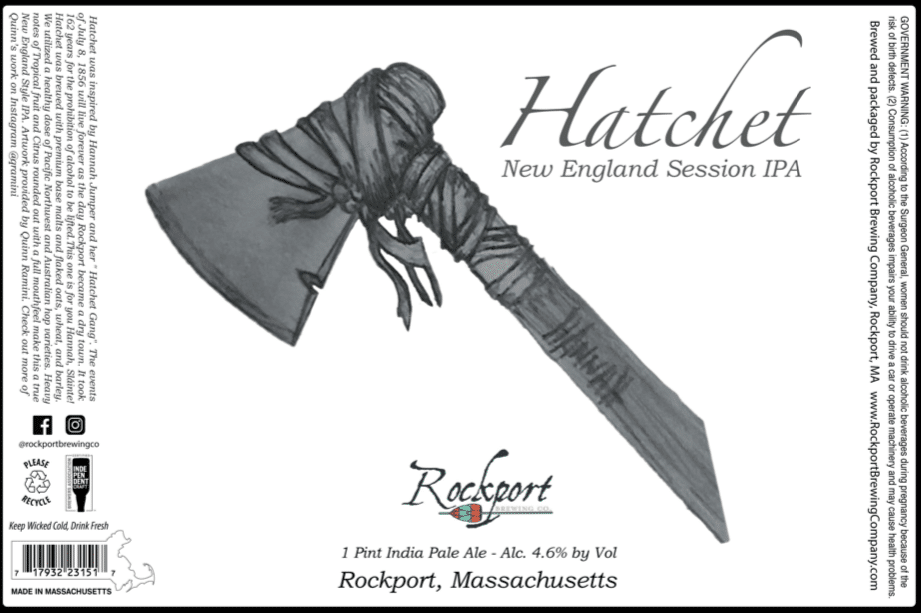 Rockport Brewing’s first release, a Session NEIPA, is named after the “Hatchet Gang,” a mob of mostly women who destroyed the town’s liquor supply with hatchets in 1856. Rockport remained a dry town for the next 150 years.

It shouldn’t be hard to pick out Rockport Brewing’s offerings on beer shelves because the 16-ounce cans will be adorned with compostable E6PR can carriers instead of traditional plastic PakTechs. Part of the brand’s environmental focus, Pickup envisions his brewery being designed with as light an eco footprint as possible. The future 3,000-square foot brewhouse and taproom, located near the commuter rail station in a former grocery store, will source local ingredients whenever possible, mitigate its water usage wherever it can, and hopes to rely at least partially on renewable energy. Pickup also plans to send his spent grains to nearby Seaview Farm to be composted, and hopes to avoid single-use plastic at the brewery. 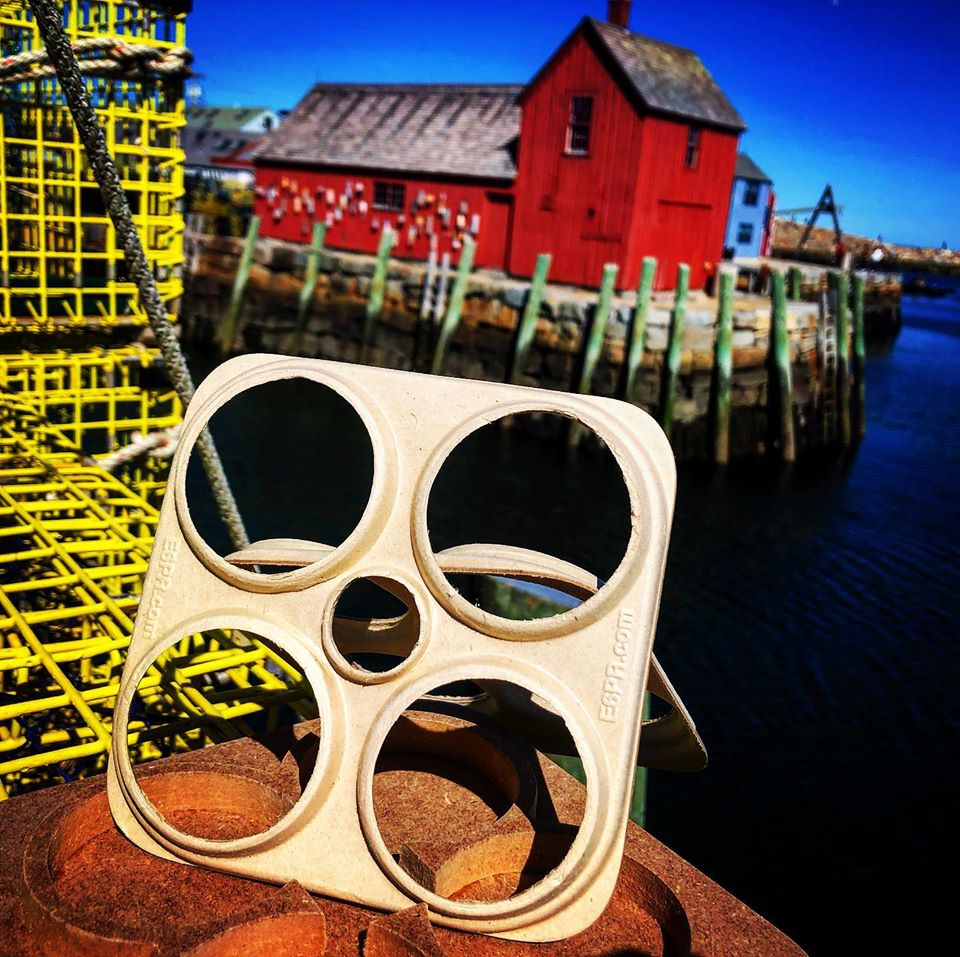 Rockport Brewing is committed to being as environmentally responsible as it can, and will package its cans with Eco Rings: truly compostable can carriers that are less harmful and polluting to oceans, wildlife, and beaches.

As well as respecting nature and the environment, Rockport Brewing plans to pay its respects to the seaside community’s cultural district and art colony, one of the oldest in the country. Less than a mile from the iconic Motif No. 1, which frequently draws artists and art lovers to the picturesque harbor, the brewery will be an extension of the town’s many galleries, says Pickup. “We plan on showcasing the local art scene on both the walls and the beer labels,” he explained. The artwork for Hatchet is by Quinn Ramini, and the design for the second release, Twin Lights DIPA, is by Stefan Mierz. As with all of its designs, both artists are locals. Twin Lights, expected to be released around the 4th of July, is named after Twin Lighthouses, the only surviving multiple lights on the coasts of the United States.

Check out what Ray pickup had to say about Rockport Brewing during his appearance on the Brew Roots Episode.

Considering that Rockport Brewing has already completed the licensing process, and is a member of the Mass Brewers Guild with access to its professional resources, Pickup is optimistic about their spring 2021 opening plans. Once things get up and running at the 10-barrel brewhouse, he looks forward to sharing more recipes, including fun seasonal styles such as a tart Blueberry and Lemon Verbana Berliner Wiesse, a Watermelon and Basil Gose, and even a Farmhouse Ale brewed with North Atlantic lobsters, lemon, and a variety of New England spices that’s meant to resemble a lobster roll.

Related: Breweries Increasingly Ditching Plastic Can Carriers For Eco-Friendlier Ones