PRESS RELEASE / July 21, 2020 (Somerville, MA) – For our 2nd ever bottle release, we bring you Deseja, a mixed fermentation sour matured for 2 years in local red wine barrels. As we prepare to share this beer with you, we’d also like to share the history behind it, and why we feel it’s such a special release! 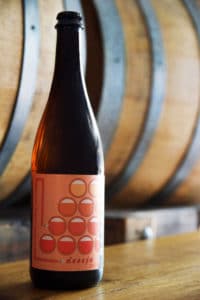 Like all good beer stories, this one begins in a basement. Before Remnant Brewing ever opened its doors, our head brewer Charlie was certain he wanted a wine barrel solera program. In fact, our first pilot batch on a friend’s basement homebrew system was a saison split into 3 carboys, one of which was pitched with cultured bottle dregs (or remnants) of 2 amazing sour beers that were consumed while brewing it. Over the next days and months, the sights, smells and even the gnarly pellicle that formed (a telltale sign of Brettanomyces secondary fermentation) all pointed to one thing: the perfect beer to start our solera project had arrived.

Instead of drinking the entire batch on the spot (though we wouldn’t have blamed them), most of it was locked away in barrels from a local winery along with a base saison brewed the first week we ever fired up Remnant’s brewhouse. This was the final step before a long road of fermentation and aging.

Over the past two years, a few of these barrels have been tasted, tapped, released, then topped up with a batch of the original recipe as part of their solera process. Each iteration highlighted unique changes in flavor and increasing complexity. You may know them from our draft list as Criadera, Criadera II, etc.

Through all this, two barrels remained untouched. They represented something special, something wilder. In the spring of 2020, Charlie felt the time was right to package these barrels and blend them with one of the Criadera barrels, which had most recently been topped up in fall 2019. This blend offered the right balance of heightened sour and funk with just a hint of a younger saison character for maximum drinkability and complexity.

This is what we present to you today: An exploration of wild sour beer, a unique expression of fruit and funk complexity, and on a deeper level, a symbol of how much things can grow in just a couple years time.

We invite you to partake in this journey 2 years in the making! Bottles are in their last phases of aging and will be available for pickup Thursday July 23rd. Click here to preorder your Deseja bottles!

We are Remnant Brewing, creators of unique, small-batch craft beer. Our taproom was recently named in a list of Boston’s top 5 breweries by Hop Culture Magazine!

A brewery in the heart of Union Square, Somerville. We are located on the first floor of Bow Market, a sprawling outdoor market of over 30 independent food, art and retail shops. The entrance to Bow Market is through stone path tucked just behind Somerville Ave. We invite you to explore the best of this indoor-outdoor city when you visit!