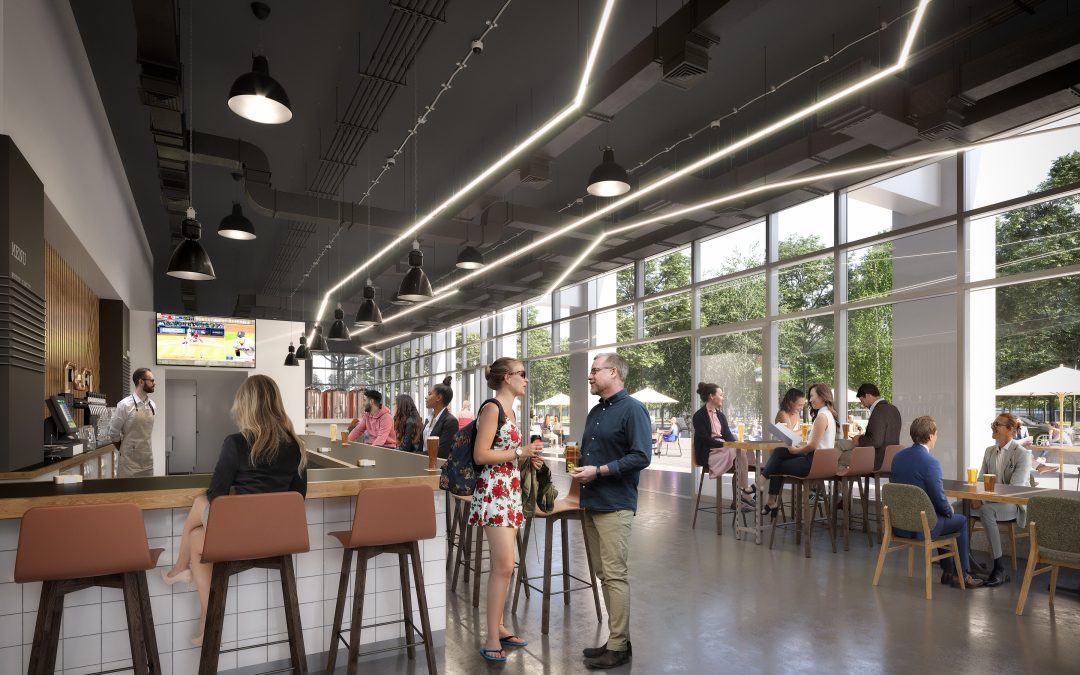 PR / Somverville, MA (September 2022) — Portico Brewing, the contract brand that has been stealthily adorning beer shelves with their architecture-inspired labels since 2012, is getting ready to take it to the next level. The company will be opening their first brick and mortar brewery and taproom in Somerville, fulfilling a goal they’ve had since the beginning.The announcement is the latest in a series of similar moves by contract brands that have adopted the taproom model that started trending just a year or so after founders Alex Rabe and Alex Zielke began their venture. Back then only brewpubs were allowed to serve their beer on premise, but now more than 85% of the state’s 220 or so breweries have an on-site pouring permit..

Portico’s new digs, a short walk from the former Slumbrew Brewhouse on Ward Street, will occupy the 3,200-square foot first floor unit of 101 South Street in the Boynton Yards neighborhood of Somerville. Almost entirely south facing, the glass-surrounded unit will provide plenty of sunlight and views of the green space to the west of the building. An additional 1,400-square foot patio runs along the side of the brewery, accessible by a giant NanaWall that opens up a large part of the glass facade and provides connectivity to the outdoors for drinking or dining. Portico will brew beers on premise and provide an eclectic food menu, prepared in-house, and offer beer to-go and merchandise.

“We’ve always envisioned a physical space as part of the long range plan,” says Rabe, who along with Zielke is a Somerville resident. “Now we’re looking forward to providing fresh beer for our local community.” To do that, they’ve installed a brewhouse that features a 3.5 barrel system and has sufficient space for brewing and fermentation. It’s viewable from the sizable taproom dedicated to serving pints of Portico brews in a comfortable, engaging environment. A small kitchen will provide lunch and dinner options, as well as an eventual coffee program to help attract a customer base throughout the day. 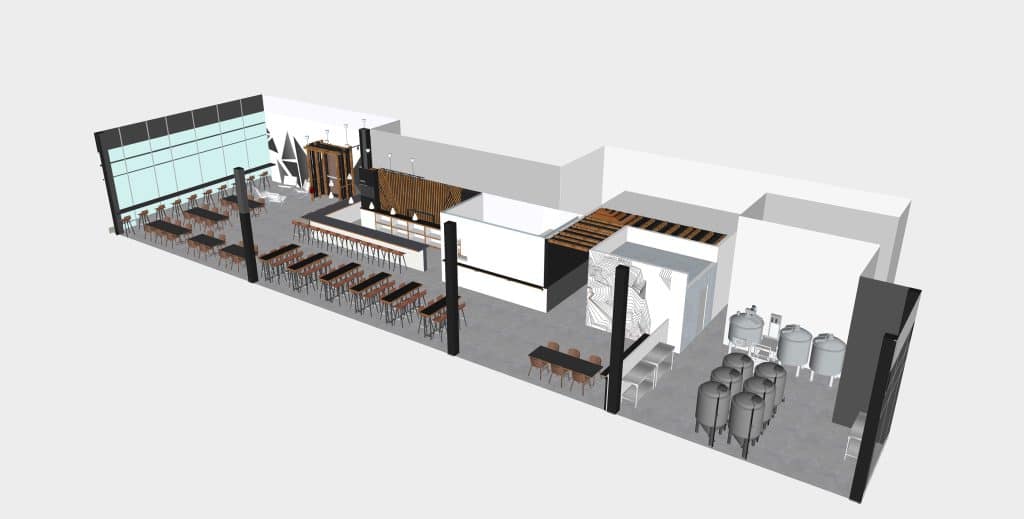 Portico’s Somerville brewery and taproom will allow it to brew on-premise and provide a comfortable and engaging environment for patrons.

The Boynton Yards neighborhood of Somerville is quickly transforming into a major hub of lab, commercial and residential activity. The Boynton Yards development will create a massive 1.8 million square foot science and innovation campus that will include three lab/office buildings, 450 apartments, a creative arts center and abundant green space. Portico Brewing is right in the middle of it all, occupying the ground floor retail unit of the development’s flagship building, 101 South Street. A short walk from the MBTA’s new Union Square station, thoughtfully designed infrastructure will make for easy access to Portico’s taproom by foot or on bike.

One of Zielke and Rabe’s overriding goals is to make sustainability a point of focus in all of the business’s operations. In fact, Portico has been awarded a Reduce, Reuse, Repair Grant from the Massachusetts Department of Environmental Protection (MassDEP) to implement several environmentally-conscious strategies. Developed in collaboration with sustainability consultant Rob Vandenabeele, founder of EcoFriendlyBeer.com, the plan’s goal is to prevent unnecessary waste by resisting the trend of disposables that many taprooms have relied on for their food and beverage service.

The taproom reusables program is part of Portico’s larger “environmental handprint,” the positive actions and measures that will help it become a greener business. Other sustainability actions include participation in the Sustainable Beverage Producer Recognition program, the decision to source its power through Somerville’s green energy option, and plans to become a certified bike-friendly business. “Our aim is to be as green as we can be,” says cofounder Alex Rabe. “Not just in the way we brew beer, but also in the way we communicate our environmental values to customers. We want to be part of the movement that believes in business for good.”

Portico Brewing is inspired by architecture and design of all kinds, and its beers are made for all to enjoy. Their focus is to rethink traditional styles and create beers with classic ingredients and careful technique. Currently a contract brand, Portico will debut its own brick and mortar brewery and community-focused taproom near Union Square in Somerville, Massachusetts in October of 2022. Committed to environmental values, its aim is to be part of the movement that believes in beer/business for good.