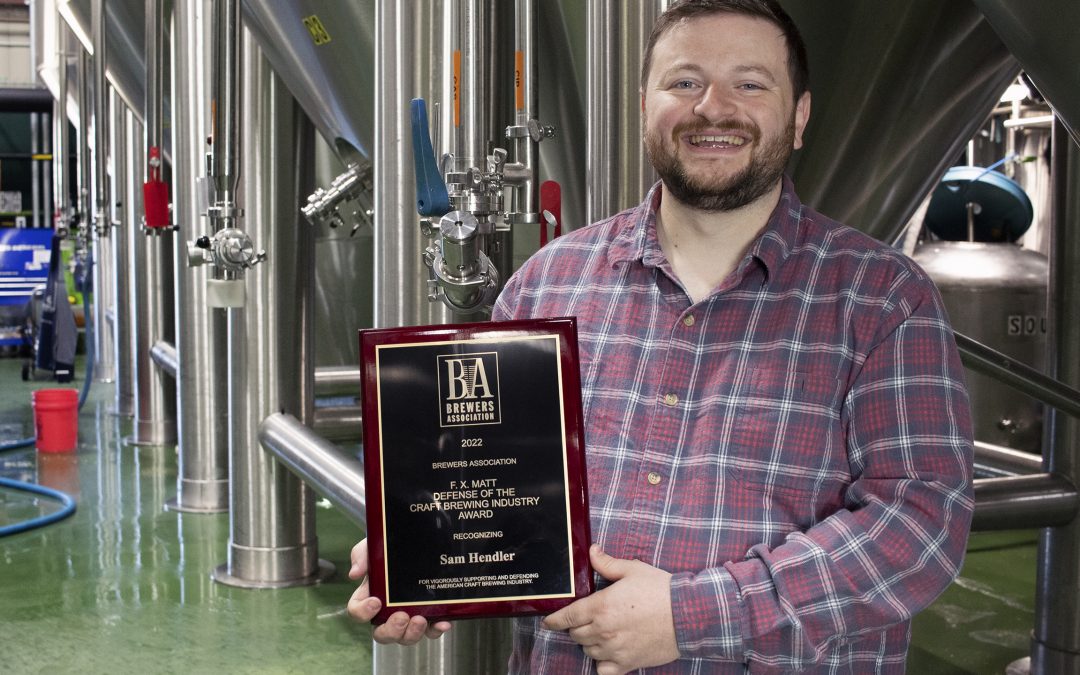 PRESS RELEASE / May 6, 2022 (Framingham, MA) – On Wednesday morning, May 4, 2022, Sam Hendler, co-founder of Jack’s Abby Craft Lagers and president of the Mass Brewers Guild, the state’s trade association that exists to protect and promote the craft beer industry, was honored with the F.X. Matt Defense of the Industry Award at the Brewers Association’s Craft Beer Conference.

The Brewers Association is the national trade group for the craft beer industry. This recognition is presented to an individual or company for their contributions and efforts in championing the small brewing industry.

During the 2020 legislative session, Hendler was able to successfully negotiate one of the most progressive franchise law changes to date—ending a 10-year battle with the Beer Distributors of Massachusetts. As part of the compromise, breweries that produce fewer than 250,000 barrels of beer over a 12-month period would be allowed to terminate their wholesaler contracts at any time by giving 30 days’ notice and paying “fair market value” for their brand rights.

This is the second award Hendler has received for his work to achieve franchise law reform in the state of Massachusetts. In November 2021, he was honored by Brewbound Awards as the Beer Champion of the Year alongside guild executive director, Katie Stinchon and Atlas Distributing owner, Joe Salois. 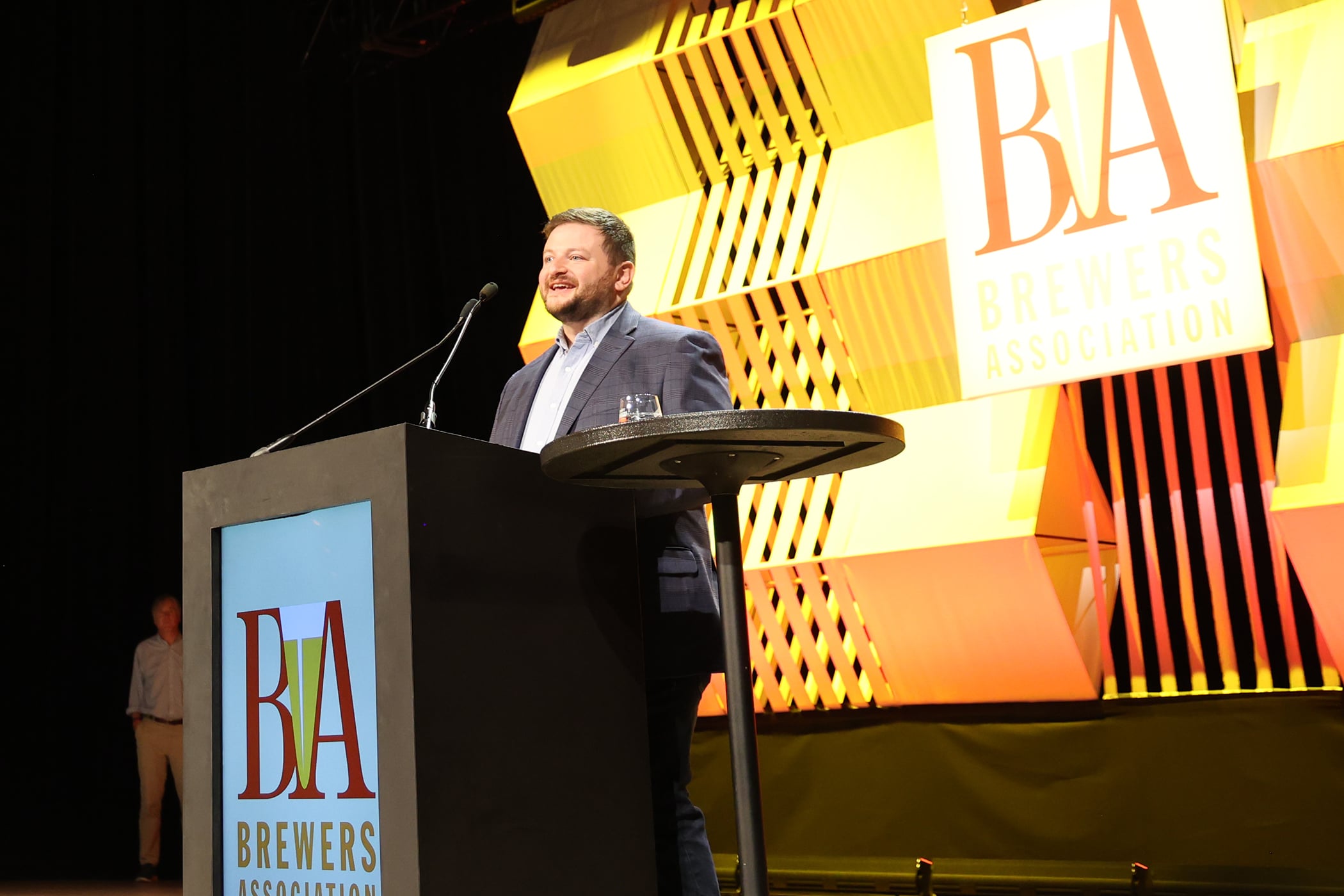 The state’s franchise laws were originally enacted in 1971 by state legislature to protect in-state distributors from large out-of-state and foreign brewers — at a time when small, independent craft brewers did not exist. The law essentially bound the brewery to its business partner for life providing unwaivable protections to the wholesaler. Fast forward to 2022, and the landscape looks much different as beer distributors have continued to grow and consolidate while hundreds of new craft breweries open each year.

To date, there are more than two dozen wholesalers in Massachusetts compared to 214 craft breweries across the Commonwealth, with 30 additional breweries expected to open before the close of 2022.

“This was a long, hard road, and I am honored and grateful to be recognized for this important milestone,” says Sam Hendler, co-founder of Jack’s Abby Craft Lagers and president of the Mass Brewers Guild. “While my name is on the award it was undoubtedly a group effort. I am happy to have gotten it across the finish line.”

Beyond accomplishing franchise law, Hendler had also just stepped into the role of president in 2020. While juggling his own business operations, he was on the frontlines leading the Mass Brewers Guild throughout the pandemic.

Helping to translate regulations and guide and reassure the brewing community, Hendler was in constant communication with the governor’s office, the Alcoholic Beverages Control Commission, Brewers Association, and the Massachusetts Restaurant Association, advocating for the brewing industry.

“Sam is masterful at creating and nurturing key relationships. He was a calm and steady voice during an incredibly challenging time,” says Katie Stinchon, executive director of the Mass Brewers Guild. “He’s generous with his resources and knowledge and we are so fortunate to have him at the helm of our association. He is very deserving of all the accolades and awards he’s received during his tenure.“

Since 1987, the Brewers Association has been recognizing individuals who inspire, defend and innovate within the craft brewing industry. Award recipients were nominated by their peers and determined by vote from committees made up of members of the Brewers Association board of directors or past award winners. This award is named for the late F.X. Matt, president of the F.X. Matt Brewing Co. a tireless and outspoken champion for the small brewing industry.

About Jack’s Abby Craft Lagers
Jack’s Abby Craft Lagers has been brewing world class lager using traditional German standards and American innovation since 2011. Founded by brothers Jack, Eric, and Sam Hendler, Jack’s Abby has become a mainstay of the craft brewing scene in the Northeast and nationwide. Since its inception, the brewery has continued to uphold its mission of brewing lagers, and only lagers. This mission challenges the idea that lagers belong to macro brewers and allows consumers to expand their palates and perceptions of what craft beer can be. The Hendlers grew up in a family that promoted entrepreneurship and hard work. Spending summers with their grandfather working at the family’s ice distribution company, they learned the value of committed family members and loyal employees – the foundation on which Jack’s Abby is based.

About the Brewers Association

The Brewers Association (BA) is the not-for-profit trade association dedicated to small and independent American brewers, their beers and the community of brewing enthusiasts. The BA represents 5,600-plus U.S. breweries and more than 37,000 homebrewers. The BA’s independent craft brewer seal is a widely adopted symbol that differentiates beers by small and independent craft brewers. The BA organizes events including the World Beer Cup®, Great American Beer Festival®, Craft Brewers Conference® & BrewExpo America®, SAVOR™: An American Craft Beer & Food Experience, Homebrew Con™, National Homebrew Competition and American Craft Beer Week®. The BA publishes The New Brewer® and Zymurgy® magazines, and Brewers Publications® is the leading publisher of brewing literature in the U.S. Beer lovers are invited to learn more about the dynamic world of craft beer at CraftBeer.com® and about homebrewing via the BA’s American Homebrewers Association® and the free Brew Guru® mobile app. Follow us on Facebook, Twitter and Instagram.

Founded in 2007 by a group of committed and passionate brewers, the Mass Brewers Guild, is organized for the purposes of promoting craft brewing and protecting the interests of craft brewers across the Commonwealth. The association is membership based and open to all Massachusetts breweries licensed by the federal Tax and Trade Bureau and the Commonwealth’s Alcoholic Beverages Control Commission. The nonprofit creates a community of brewers while shining light on the broad range of breweries and styles offered throughout state. Through industry and educational events and by providing resources and marketing support to brewers, the nonprofit works to highlight Massachusetts as a top travel destination for craft beer in the U.S. The board also continues its work at the legislative level serving as the voice of craft brewers on Beacon Hill. The Massachusetts Brewers Guild is a 501(c)6 not-for-profit corporation. For more information, visit massbrewersguild.org.