Oktoberfest “Party in the Street” at the Gardner Ale House

Gardner’s own Moon Hill Brewing Co. at the Gardner Ale House, along with the City of Gardner, present their 14th Annual Oktoberfest “Party in the Street”. Admission for this event is free and open to all ages. Parker Street will be closed to traffic. 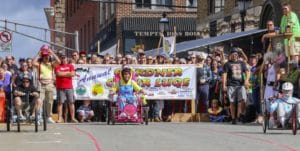 The Gardner Chair Luge, powered by the Acadien Social Club, begins at 2:00 PM. Race teams convert their armchairs, sofas, and barstools into soapbox derby-style racers. They will be competing for the coveted Chair Luge Trophy and $200 in one dollar bills. Teams compete in costume and the event has become a legend in Central Massachusetts. “Human Bumpers” keep everyone safe. And revered Acadien Club mascot Brad Gallant clowns around dressed in this year’s theme: “The Muppets”. Mr. Gallant simply replied “No comment” to our query regarding this year’s costume. Then, relenting, he added: “I’m certainly not going to be Miss Piggy”. Knowing his proclivity for dressing in female garb, one wonders if Miss Piggy just might be making a showing in spite of denials.

According to Gardner Ale House and Moon Hill Brewing Co. owner Rick Walton, “Each year we keep shooting for the stars, which means we aim to make it twice as big as the previous year. Last year we accomplished just that and had our biggest party ever. The weather helps! This years major attraction, in addition to the luge is our Totally Local line up of musical acts.

This year’s musical lineup begins at 3:30 PM, just after the Chair Luge with:
3:30 PM Safehill Taking it back to the decade they were born in, these guys are solid 90s Rock.
5:15 PM The Green Sisters A Bluegrass/Newgrass quartet from Worcester County. The four local sisters sing tight harmonies while switching instruments from upright bass to fiddle to acoustic guitar to banjo. They deliver authentic Kentucky Soul while being totally original.
7:00 PM Electric Green Co. A local groove based Blues, Rock, Jazz fusion Funk band.
8:45 PM The Sufferin’ Bastards Local classic Rock band playing all your classics and favorites.