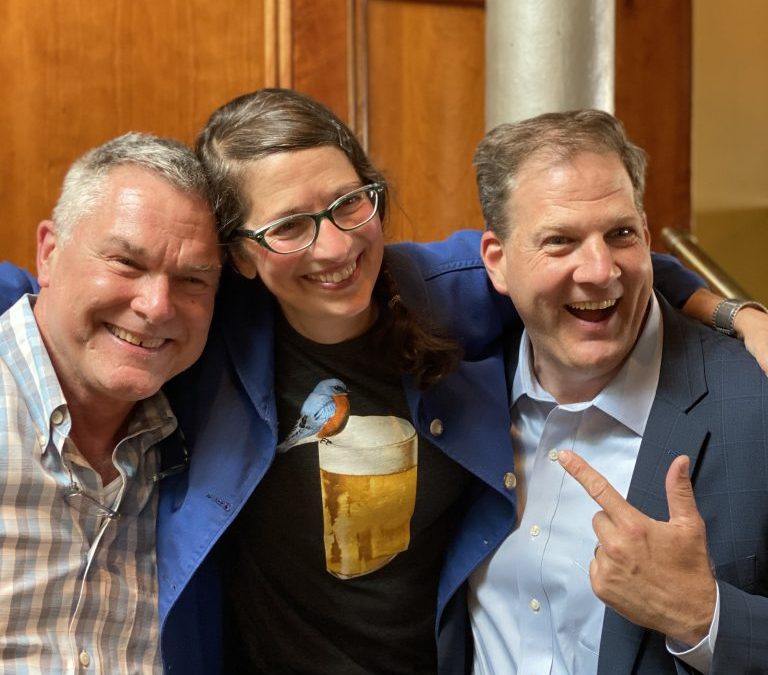 PRESS RELEASE / June 7, 2021 (Portsmouth, NH) – The Portsmouth Brewery, New Hampshire’s first licensed craft brewery, which created the foundation for an industry that now boasts 91 craft breweries across the state, is celebrating its 30th anniversary. According to the New Hampshire Brewers Association, the total economic impact of the industry is $506 million.

Co-founder Peter Egelston looks back to 1991 and says at the time, Portsmouth was a gritty seaside town with lots of potential: “My sister, Janet, and I started looking for a second location shortly after we opened the Northampton Brewery in Massachusetts in 1987. After two years of frustration, we stumbled across Portsmouth and knew immediately that it was where we were meant to be all along. We hired a local architect and contractor for the challenging task of designing and building a restaurant and brewery in the historic downtown space we’d purchased. Because brewing beer on premise was something most people had never heard of at the time, we put our brewhouse in the dining room behind glass, visible to our guests.”

The Portsmouth Brewery continues to develop some of the most interesting craft beers in the region and is a top-rated destination on the Seacoast for both locals and tourists.

New Hampshire Governor Chris Sununu helped mark the occasion by jumping behind the bar and pouring beers for patrons at a birthday gathering on June 1. With a pint of “Libeeration” in his hand, Sununu toasted co-owners Egelston and his partner, Joanne Francis, and the staff, “Thirty years is an amazing feat,” said Sununu. “You don’t get there without an amazing team.” Governor Sununu noted that he understands the post-COVID challenges for restaurants, including the labor shortage, an issue that has forced many restaurants to limit their hours because they are understaffed.  Said Sununu, “Unemployment is crazy low – 2.7% – the lowest in the country.”

In his remarks at the gathering, Egelston shared how emotional this milestone is for him: “It’s so meaningful for me – for people to make this a stop on the journey of life. It’s hard to imagine that 30 years have gone by. It’s been a great ride and we’re so proud we’ve been able to provide this space for people to come together.”

Egelston credits a desire to remain true to their principles as a factor in the Brewery’s success: “We are first and foremost a public house, in the truest sense of the word – a place of public gathering for people of all ages and persuasions. We have always strived to set deep roots in our community, to source quality ingredients, to make as much as we can by hand, to use sustainable practices and to encourage our brewers to be creative and original.”

Egelston says he is proud that the Brewery’s small brewhouse has launched the careers of many brewers. Head Brewer Maxine Munsey says “It’s an exciting place to be; to evolve and adapt while maintaining the familiarity that people have grown to love and expect. That’s true in the brewhouse, the kitchen and in the front of the house.” Many craft brewers who launched their careers at The Brewery stopped in to the June 1 event to offer thanks and congratulations.

Egelston’s partner, Joanne Francis, helped provide the creative design sensibility that has become iconic.  “We serve all types” – the motto she coined before the Brewery even opened its doors – continues to guide the company. Thirty years ago Francis would hunt for antique photos and prints that provided a vintage feel for the Brewery’s branding, in addition to working with talented local artists like Dan Gair and Dan Blakeslee.  Says Francis, “Working for a brewery/restaurant was an opportunity to have extra fun. We were all young and full of beans and definitely pushed the envelope – but it worked! Our style has always been offbeat yet accessible, which speaks to our personalities and our desire to create a friendly experience, where it’s not just the great beer, food, and atmosphere, but a place to make lifelong connections, too.”

The Portsmouth Brewery also pushed the envelope on its menu from the get-go: offering vegetarian items, which was a breakout concept for a brewpub at the time.

Folks who were 21 years old when the Brewery opened are now in their 50s and they still gather at the bar, sometimes with their own adult children, and feel the camaraderie they experienced when it was the only craft brewery in the state.  Seacoast restaurateur Michael Landgarten says the fact that beer was being brewed in the restaurant was very new for the area: “Glass enclosed tanks! The art was outrageous and fabulous. The room was alive. The beer – a revelation. The menu was fun and had healthy and vegetarian options. They set a new standard in town for what could be. Along the way they became an institution, a cornerstone, due in large part to the courage, imagination and values of the owners, Peter and Joanne. Community leaders in every sense. Thank you, Peter and Joanne and congratulations on 30 wonderful years. The Portsmouth Brewery has been a gift to us all.”

Portsmouth Brewery is located in the heart of Portsmouth, a historic port city located on New Hampshire’s Seacoast. Many folks visit the Brewery, look through the glass windows, see a lot of shiny tanks, hoses and gizmos, scratch their heads and wonder what they are looking at. What they are looking at is the heart and soul of this business, the reason for our existence as a company. This is what we are all about: good fresh beer, made by hand using traditional methods and ingredients, and served up with a smile. We have good reason to smile, too. We serve over 250,000 pints of our beer each year.