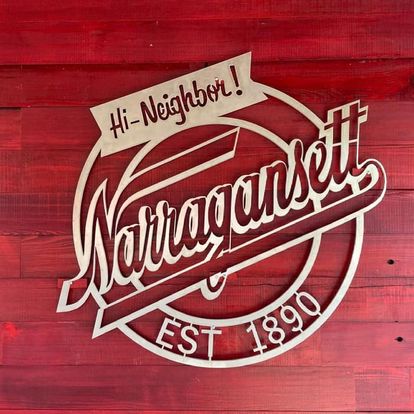 PRESS RELEASE / February 28, 2022 (Providence, RI) – Founded in 1890, Narragansett Beer is a staple within the Rhode Island community – always having been “made with honor” and proud of the state they call home. While heritage and tradition play a large role in the brand’s story, ‘Gansett is proving to be more than just your standard brew with a slew of innovative new craft beers from the mind of head brewer Lee Lord and exciting upcoming events at the Providence brewery.

On March 5th, gather up your neighbors and stop by the brewery to toast to the small but mighty Ocean State at Narragansett’s Ultimate Rhode Island Day. Kicking off the inaugural Rhode Island Craft Beer Week, a celebration of excellence in brewing across the state, ‘Gansett will launch the newest draft Hanley’s Peerless Ale – a traditional style English Pale Ale that nods to RI’s rich brewing history – alongside noshes from iconic Rhody staples like RI Hot System Wieners.

According to Lee, exploring the local history of brewing and utilizing all the tools available at the brewhouse gives her and the team the opportunity to merge history and tradition with innovation and new and unique tastes, paving the way for ‘Gansett’s expansion within the craft beer space. In addition to these two new beers, this includes the historically inspired 1822 Porter, a partnership with the Rhode Island Historical Society, along with a lineup of other popular craft beers at the brewery including Nate The Great West Coast IPA, Musik Express Double IPA, and the revamped Bohemian Pilsner.

Narragansett Beer…Brewed since 1890. ‘Gansett is a straightforward, quality beer that has been a New England tradition for generations, producing a classic family of award-winning American lagers & ales. Today, ‘Gansett is produced in Providence, R.I., and Rochester, N.Y. and is the 32nd largest craft brewer in America and the fastest growing in the Northeast. Narragansett is available for purchase in local restaurants, bars, and liquor stores throughout New England, New York, New Jersey, Pennsylvania, Delaware, the District of Columbia, Georgia, Maryland, Kentucky, Ohio, Indiana, Wisconsin, North Carolina, South Carolina, Florida, Virginia, Portland, Ore. and Nashville and Chattanooga, Tenn. Thirsty for more? Visit www.narragansettbeer.com or follow Narragansett on Facebook (NarragansettBeer), Instagram (@GansettBeer), and Twitter (@GansettBeer).