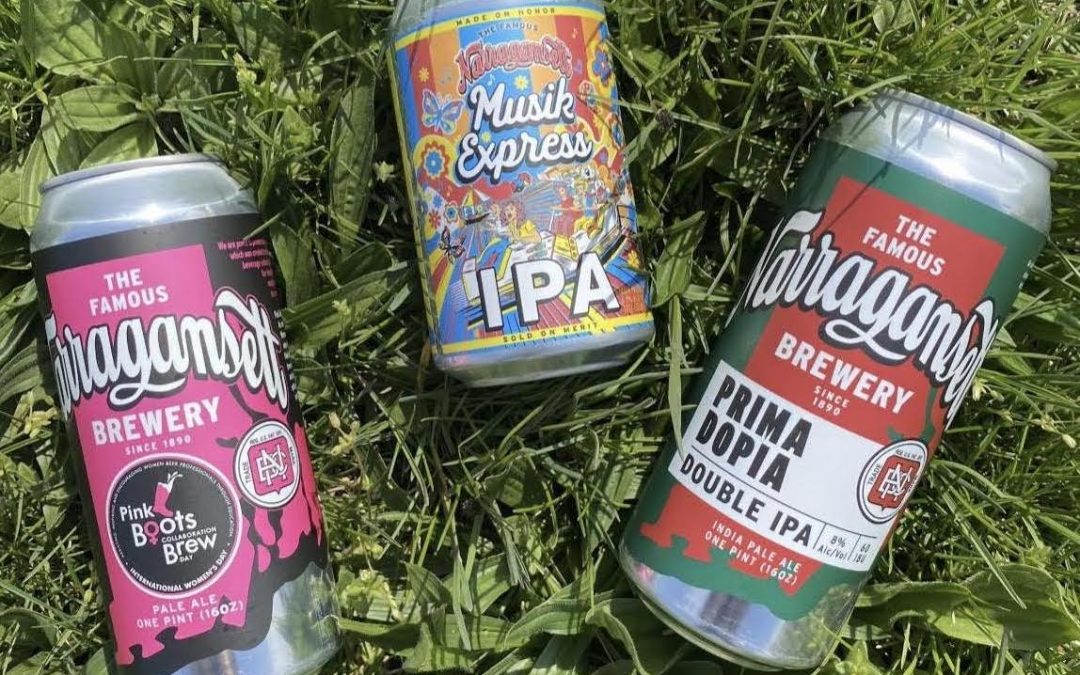 PRESS RELEASE / April 29, 2021 (PROVIDENCE, RI) – Hi Neighbor! In anticipation of the opening of the Narragansett brewery and taproom later next month, Narragansett Beer is thrilled to announce the release of three new beers and the launch of on-site beer to-go. Prima Doppia is the brewery’s first foray into the hazy, full-bodied, double IPA segment and is sure to please. Musik Express IPA is a balanced, fruity IPA that will transport drinkers to the iconic ride at Rocky Point Park. Finally, Pink Boots Pale Ale is a collaboration beer with the Pink Boots Society. With every Pale Ale sold, ‘Gansett will donate a portion of proceeds to support the organization’s scholarship funding efforts. Prima Doppia and Musik Express are available in stores and restaurants across Rhode Island, with Musik Express rolling out in southeastern Massachusetts now and Prima Doppia to follow in late May. In addition to Prima Doppia and Musik Express, Pink Boots Pale Ale is a limited release also available to-go at the brewery beginning via the Narragansett website:(https://biermi.com/store/narragansett/store). Other existing ‘Gansett favorites will also join this new lineup over the coming weeks.

“After 130 years, we could not be more excitedto begin brewing andto get a first taste of what is just the start of new beersout of the brewery!”says Mark Hellendrung, President of Narragansett Beer. “With the doors nearly ready to open, we’re thrilled to release these three brand new brews spearheaded by our head brewer Lee Lord. I can’t wait to celebrate ‘Gansett’s official Providence homecoming later this month, raise a pint to a brighter year ahead, and pave the way for many generations to come right here inRhode Island!”

Located near the picturesque India Point Park in the city’s Fox Point neighborhood, the 18,000 square foot brewery will feature an indoor taproom and bar and sprawling outdoor patio where imbibers can enjoy their favorite ‘Gansett brews while enjoying waterfront views of Narragansett Bay. With both on-site and street parking, the brewery offers easy access to the I-95 highway and sits near the popular East Bay Bike Path. Fans from New England and beyond can experience the beers, including flights, alongside a menu of delicious local snacks and sandwiches, and also look forward to celebratory events throughout the year. The brewery plans for soft openings throughout May and is aiming at an official grand opening slated for Memorial Day Weekend both indoors and on the outdoor patio. Follow along on the @GansettBeerPVDInstagram for updates on the official opening of the Narragansett Brewery in May. See you soon, Neighbor!

Plastic Can Carriers Are NOT Curbside Recyclable, But SOME Breweries CAN Reuse or Recycle Them

About Narragansett Beer
Narragansett Beer…Brewed since 1890. ‘Gansett is a straightforward, quality beer that has been a New England tradition for generations, producing a classic family of award-winning American lagers & ales. Today, ‘Gansett is produced in Providence, R.I., and Rochester, N.Y. and is the 32nd largest craft brewer in America and the fastest growing in the Northeast. Narragansett is available for purchase in local restaurants, bars, and liquor stores throughout New England, New York, New Jersey, Pennsylvania, Delaware, the District of Columbia, Georgia, Maryland, Kentucky, Ohio, Indiana, Wisconsin, North Carolina, South Carolina, Florida, Virginia, Portland, Ore. and Nashville and Chattanooga, Tenn. Thirsty for more? Visit www.narragansettbeer.com or follow Narragansett on Facebook (@NarragansettBeer), Instagram (@GansettBeer), and Twitter (@GansettBeer).