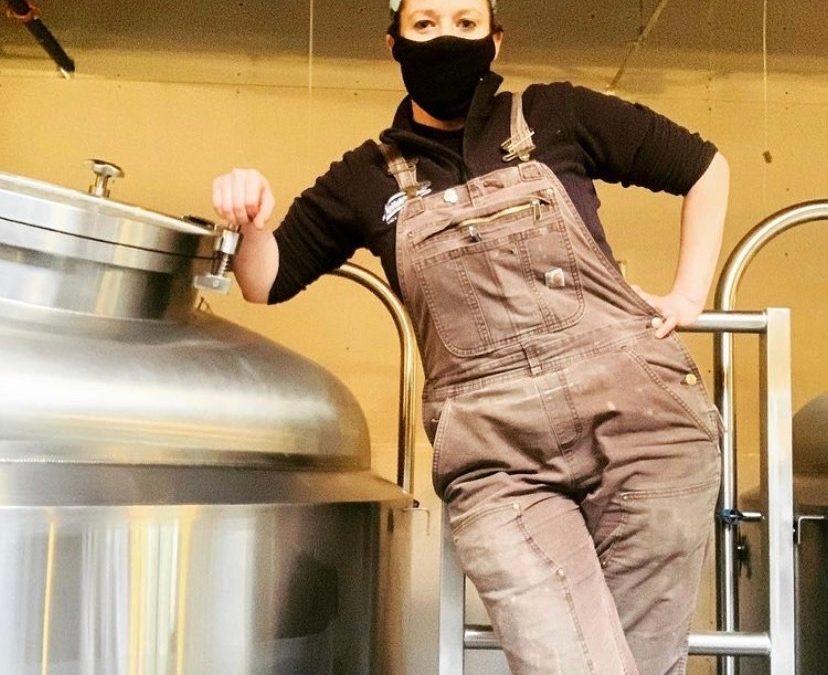 PRESS RELEASSE / March 10, 2021 (Providence, RI) – Narragansett Beer is proud to announce industry veteran Lee Lord as the new head brewer. A tried–and–true New Englander, Lord joins Narragansett, as the brand’s first ever female head brewer, armed with more than a decade ofexperience in the craft beer and brewing industry. Leading up to and after the official opening of the highly anticipated Narragansett Brewery in spring 2021, Lord will play critical role in the exciting Providence homecoming and next chapter.

Originally from Lexington, Massachusetts, Lord joins Narragansett after years plying her trade at brewpubs and taprooms throughout the region, beginning in 2010 at Watch City in Waltham, Massachusetts followed by Smuttynose Brewing Co. in Hampton, New Hampshire and, most recently, as head brewer at Cambridge Brewing Co. in Boston, Massachusetts. As head brewer of Narragansett, Lord will oversee operations and production of all beer produced at the Providence brewery and lead a team of assistant brewers. A lifelong Narragansett fan, Lord’s move to the heritage New England craft trailblazer is a natural next step.

“I’m beyond thrilled to join Narragansett and help reestablish the brand’s Rhode Island brewing tradition here in Providence,” says Lee Lord, Head Brewer of Narragansett Beer. “Working closely with Mark and the team has been such a collaborative and rewarding experience. I can’t wait to continue to build upon ‘Gansett’s storied heritage and history in new and exciting ways, brew the highest–quality beer and create an amazing experience for fans right on the beautiful India Point Park waterfront!”

Lord’s passion for the industry is coupled with her dedication to helping pave the way for women in her field to rise through the ranks. A highly active member of the New England/Boston chapter of Pink Boots Society, an organization that provides scholarships to women in beer and beverages to further their professional education, Lord credits her involvement in the encouraging and supportive network of women with propelling her career forward. Lord was recently awarded the University of California, Davis Intensive Brewing Science for Practical Brewing scholarship for her enduring commitment to her work and influence within the female beer community.

“We could not be more excited to welcome Lee to the Narragansett team!” says Mark Hellendrung, President of Narragansett Beer. “Lee has a breadth of knowledge by her many years in the New England brewing community and is a true force to be reckoned with. I can’t wait to drink the wide range of styles to be brewed, from the innovative to the traditional classics, and the powerful impact she will undoubtedly have on the brand’s growth and success right here in Rhode Island and beyond.”

In addition to cranking out Narragansett’s full stable of revered craft brews, Lord is excited to experiment with unique flavors and bring distinct beers to the repertoire that fans haven’t seen before. Staying true to her Pink Boots roots, Lord will kick off with a special beer in collaboration with Pink Boots Society as part of the organization’s 2021 Collaboration Brew Day. Available within the brewery’s preliminary lineup, for every beer sold, ‘Gansett will donate a portion of proceeds to Pink Boots Society to support their scholarship funding efforts.

Stay tuned for more from Lord and updates on the official brewery opening, slated for early spring 2021.

Narragansett Beer…Brewed since 1890. ‘Gansett is a straightforward, quality beer that has been a New England tradition for generations, producing a classic family of award-winning American lagers & ales. Today, ‘Gansett is produced in Providence, R.I., and Rochester, N.Y. and is one of America’s top 30 craft brewers and the fastest growing in the Northeast. Narragansett is available for purchase in local restaurants, bars, and liquor stores throughout New England, New York, New Jersey, Pennsylvania, Delaware, the District of Columbia, Georgia, Maryland, Kentucky, Ohio, Indiana, North Carolina, South Carolina, Florida, Virginia, Portland, Ore. and Nashville and Chattanooga, Tenn. For additional information, visit www.narragansettbeer.com or follow Narragansett on Facebook (/NarragansettBeer), Twitter (@GansettBeer) and Instagram (@GansettBeer).