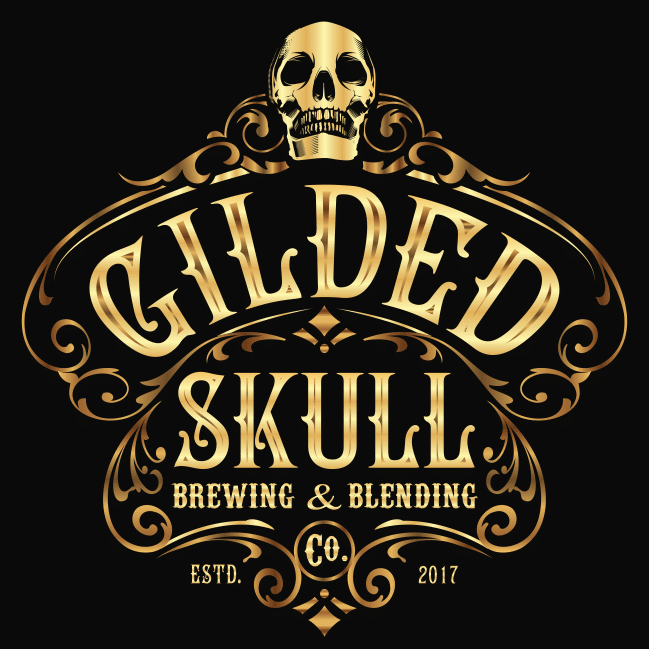 Award-winning home brewer Neil Kade spent most of the last two years dealing with a rare form of liver cancer and fighting for a future. We first wrote about his story last February, when as Kade put it “all we wanted was normalcy, to start our family and build this little beer project into a brewery.” Now, after successful surgery and a grueling 12 months of chemotherapy, he and his wife are about to take their first steps toward achieving both of those dreams. “Our first child is due in a few weeks,” he recently announced on Facebook, “and very soon, Gilded Skull will be bringing you its first release.”

As the brewery’s name and imaging illustrate’s, Kade envisions Gilded Skull as a visual brand – an ode to his love for metal music. The initial idea was hatched in 2017, he says. “I wanted to make beer that was fantastic, and pull inspiration from the music of bands like Motörhead, Iron Maiden, Megadeth, and others who influenced me. It’s an endless list.” To help market the brand, he plans to tag some of the amazing artists that are tied into that music world, the first being Chris Alliston, who’s resume includes artwork for Metallica, Mastadon, Conan, as well as Moonshine skateboards. “The intent here is to be very focused on the entire product as an artistic endeavor, from the liquid to the ink,” says Kade.

The initial release, Gilded Empire IPA, is a 7.2% ABV New England IPA featuring Citra, Cashmere, and Lotus hops along with spelt and flaked oats, which Kade says will give it a healthy body and rich mouthfeel. Available in four-packs of 16-ounce cans, it should hit beer store shelves in Greater Boston and surrounding areas next week through distribution with Craft Collective. For the time being, Gilded Skull will be brewed under contract at Castle Island Brewing in Norwood, which Kade has forged a working relationship with. The long-term goal is for Gilded Skull to open a brick and mortar space of its own, but until then the brand hopes to release at least half a dozen offerings a year, including hoppy IPAs, Stouts and perhaps even Lagers. 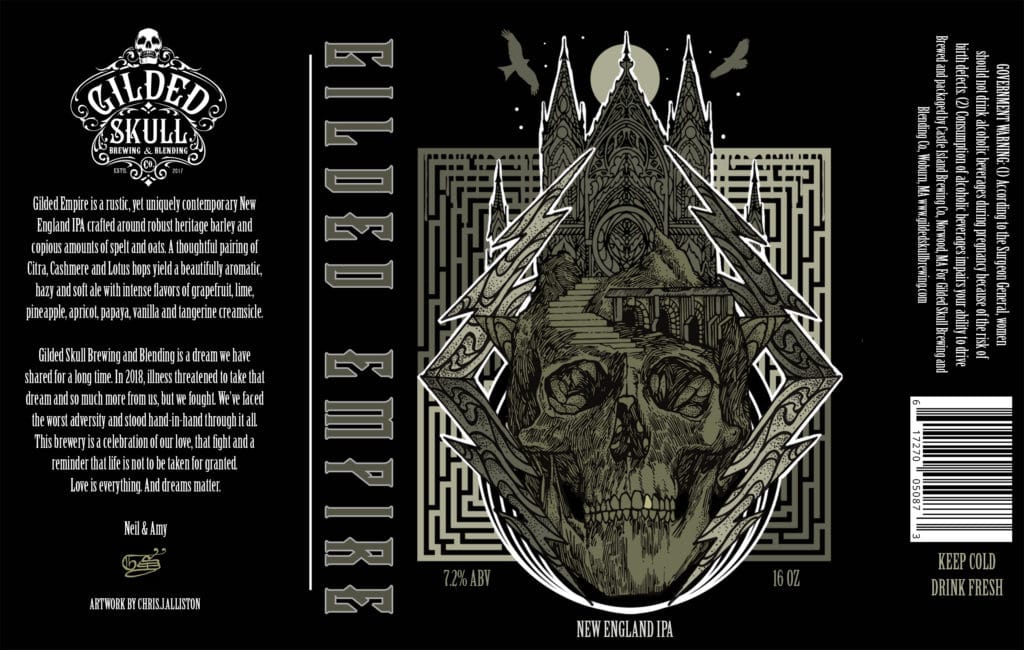 A sneak peek at the can label artwork for Gilded Skull’s first release, Gilded Empire IPA, designed by Chris Alliston. Like the brewery’s logo, the final version will be emblazoned in gold.

The styles Kade is most passionate about – Saisons, Barrel-Aged Beers, and Sours – were the focus of Gilded Skull’s small-batch beginnings, and several 3-barrel batches of them are currently aging on oak at Granite Coast Brewing in Peabody. All are mixed-culture and intended to be keg-conditioned, and the hope is to find a handful of higher-end beer bars willing to commit to the extra care needed to maintain a dedicated draft line to properly pour such unique beers. If that proves to be too difficult, the backup plan is to release them as bottle-conditioned offerings. Kade expects some of them to be available later this year. Once packaged, they’ll have to condition for anywhere from a month to as long as six months before being released. “You have to taste through them, he explains, “and the beer will let you know when it’s ready. It’s a real labor or love.”

The decision to partner with Castle Island and produce clean beers on a larger scale (the first release is a 30-barrel batch) wasn’t in the original business plan, says Kade, “but it’s exciting.” He intends to continue producing small-batch beers out of Granite Coast, and says it’s still his real passion, but for now will focus on producing a wider variety of styles and for a much larger market. “We’ve planned on doing that all along, once we committed to a physical location,” he says. “Hopefully building a recognizable brand through contract brewing will help us transition to our own physical brewery in the future.”