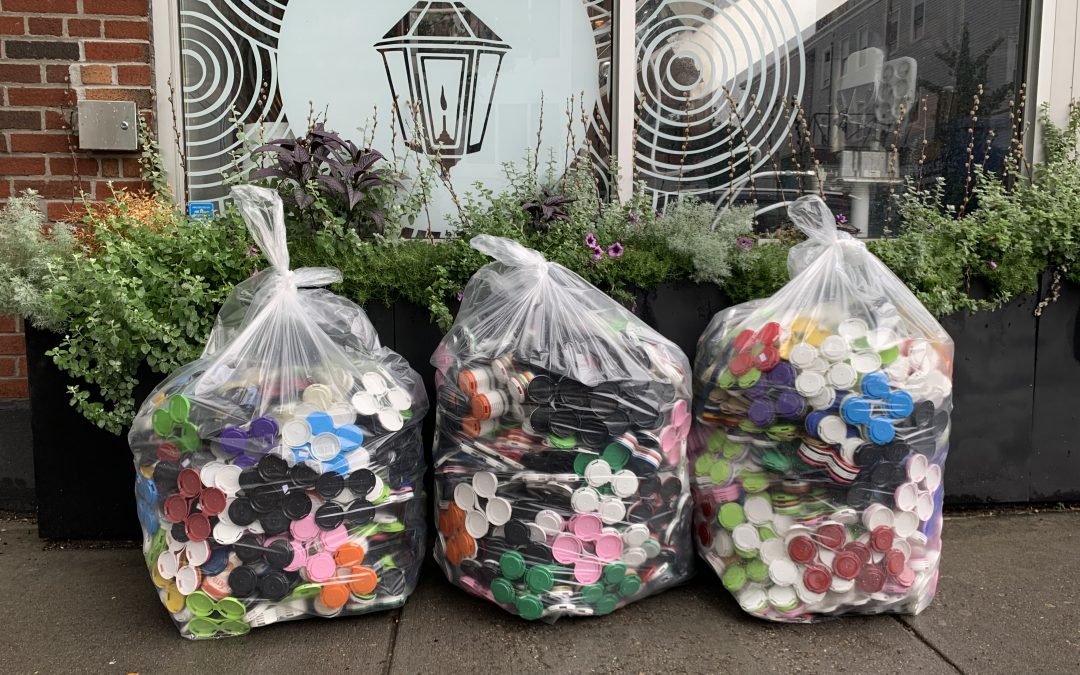 PR / Boston, Massachusetts (January, 2022) — Riding momentum from the launch of a formal, state-wide plastic can carrier Reuse & Recycle Initiative in May, Metro Boston and the rest of Massachusetts has seen a measurable uptick in the reuse and recycling rates of the troublesome and not-curbside-recyclable packaging. Support from the Massachusetts Brewers Guild and the Massachusetts Department of Environmental Protection’s RecycleSmartMA program helped build consensus within the industry on why and how to tackle the issue with a coordinated effort.

Additionally, an awareness campaign and reuse effort conducted by EcoFriendlyBeer.com, along with a successful pilot recycling program sponsored by GreenLabs Recycling and partner breweries Aeronaut, Harpoon, Lamplighter, and Trillium, resulted in overwhelming consumer response to the initiative. In just eight months, Metro Boston beer drinkers alone rescued more than 75,000 plastic can carriers from the waste stream. Nearly half of them have been sorted, cleaned and reused to package more beer, with the remainder (some 1,000-plus pounds) being hauled away to a local plastics processor for shredding, melting and pelletizing to provide raw material for new plastic products.

Though no official data was collected for the state as a whole, EcoFriendlyBeer.com founder Rob Vandenabeele estimates that at least a quarter of a million carriers (more than 3 tons) were kept out of landfills, incinerators, and the environment since the initiative’s official launch. Though difficult to calculate precisely, it will prevent more than 20,000 pounds of CO2 from being released into the atmosphere and spare wildlife from harm from entanglement or ingestion of microplastics.

Among other highlights from the initiative’s 2021 efforts were the creation of an interactive map (already viewed nearly 30,000 times) to help consumers find their nearest take-back location, the addition of more than 50 new drop-off sites throughout the state (including notables such as Jack’s Abby, Lord Hobo, Night Shift and Sam Adams), and a plethora of positive press coverage from media outlets such as The Boston Globe, Craft Brewing Business, and Metro Boston NPR stations WBUR and WGBH.

Impressive collection efforts ranged from mid-sized brewers like Untold Brewing in Scituate and Barrel House Z in Weymouth, which reused tens of thousands of carriers to package their beer, to smaller breweries like Navigation Brewing in Lowell, Bone Up Beer in Everett, Stone Cow Brewery in Barre and Kismet Brewing in Westfield, which all topped 100% of their cans with consumer turn-ins of the reusable packaging. Larger breweries made an impact as well, like Exhibit ‘A’ Brewing in Framingham which collected enough plastic carriers from environmentally conscious customers to fill and ship two gaylord boxes to recycler Stockbridge Plastics in nearby Millbury, and Lamplighter Brewing in Cambridge, whose customer and local account take-back program helped extend the life of more than 17,000 carriers.

Despite the successes of the Can Carrier Reuse & Recycle Initiative’s first eight months, substantial opportunity exists for improvements in 2022, among them the further adoption of the program by more of the state’s 200-plus breweries, not to mention the hundreds of additional retail stores where their beer is sold in cans. Additionally, a need exists for volunteers throughout the state to “adopt” a local brewery or beer retailer to help start a formal take-back program or improve an existing one. More information on this new component of the initiative will be released soon.

Rob Vandenabeele, an avid gardener, biker, nature lover and beer industry blogger, founded the EcoFriendlyBeer.com website in early 2020. Currently enrolled in the Environmental Studies program at Harvard Extension School, his goal is to inspire people to better protect our earth, the only planet with craft beer. You can follow him on Facebook, Twitter or Instagram at @EcoFriendlyBeer.

About the Massachusetts Brewers Guild