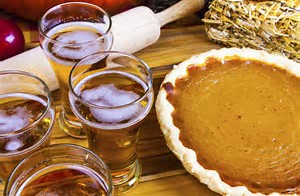 With turkey day just around the corner we figured you were probably starting to think about what to pair with your Thanksgiving feast. While we don’t generally adhere to strict limits on what to drink when we’re out to dinner or hosting a family meal, there are plenty of experts who provide helpful suggestions. A couple of stories we saw last week, “To Pair With That Thanksgiving Bird, Consider Beer,” and “A Thanksgiving Craft Beer Shopping List” inspired us to reach out to some local beer stores for their recommendations. So here you go:

Earlier in the day, when people are nibbling on snacks or appetizers, go with lighter beers such as Plum Island Belgian White from Newburyport Brewing or Mystic Brewery’s Table Beer, which were among the recommendations by the Fort Point Craft Beer Cellar. Both are low ABV beers, probably a good idea if you’ve got  a family member who usually ends up sauced before the turkey’s even done. If you want other ideas on pairing from the Fort Point CBC check out their Thanksgiving Beer Pairings Tasting event today at 5:00, sorry about the late notice.

When you get to the main course it might be a good opportunity to switch to a Saison like Cambridge Brewing Company’s Working Class Hero, or Barrett’s Farmhouse Ale from Battle Road, a favorite of the Newton Craft Beer Cellar staff. Other options include Lola’s Saison from Abandoned Building or Bombus Impatiens from Bear and Bramble, both recommended by Cooper’s Corner in Northampton. And of course there’s Mayflower Brewing’s Thanksgiving Ale, by Yankee Spirits in Sturbridge.

After you’ve had a chance to nap on the sofa, and possibly even loosen the top button on your pants (get your mind out of the gutter), it’s time to reach for a brew or two that will pair with pie. May we suggest Porters. The Craft Beer Cellar mothership in Belmont lists Brewmaster Jack’s Rye version, Slumbrew’s Porter Square, and Night Shift’s Awake among their faves. Or you could just skip the pie and splurge on a bomber of Pecan Pie Porter from Clown Shoes, which is what CBC Fort Point suggests.

For the incurable hopheads out there that can’t imagine a day with out an IPA here are a few recommendations from each of the aforementioned beer stores: Lord Hobo’s session Hobo Life, The Double from Bldg 8, Danko DDH Rye from Exhibit ‘A’, Wachusett’s Wally, or any of the three IPAs from Fort Hill. Or you could always make the trip to Tree House or Trillium, we hear they’ve got some decent IPAs as well.

Happy beer shopping. We’ll hit you up next week with a list of dark and delicious options for Craft Beer Black Friday. Cheers