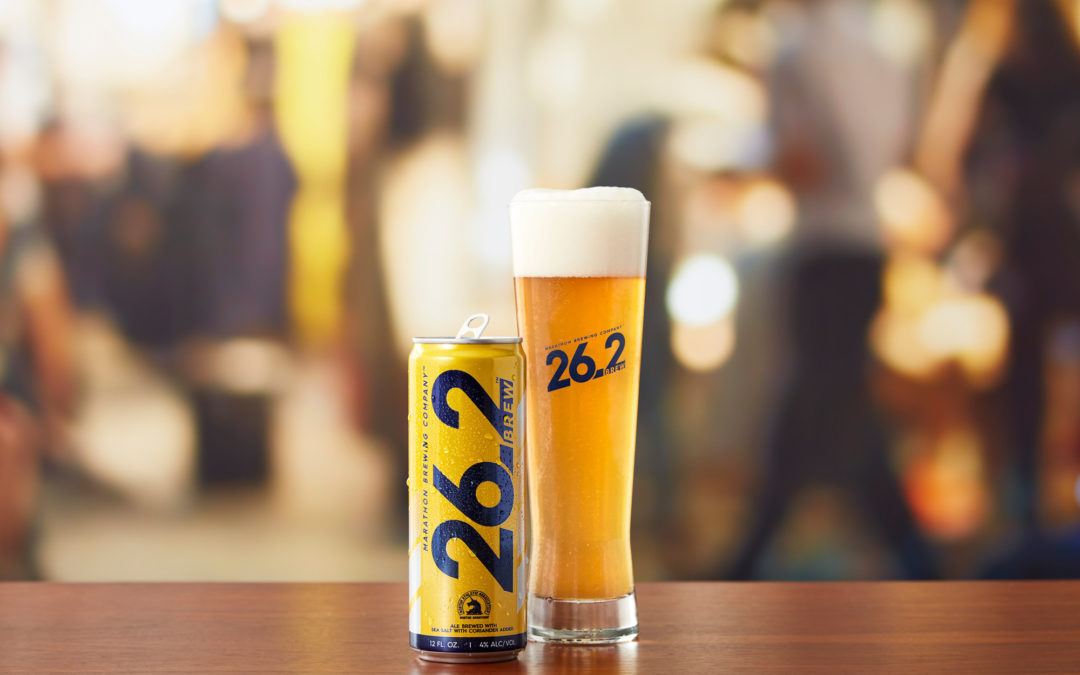 BOSTON, March 6, 2019 / Press Release — Today, Marathon Brewing, a new endeavor from The Boston Beer Company, announces the launch of 26.2 Brew. The golden, hazy ale offers athletes a reward for their hard work that tastes as satisfying as their accomplishments feel. Brewed with Himalayan sea salt and coriander, 26.2 Brew provides drinkers a crisp body and refreshing finish with 4.0% ABV, 9g carbs and only 120 calories.

As consumers increasingly seek wellness-minded activities and better-for-you options, 26.2 Brew was developed by Shelley Smith, a brewer, marathon runner and triathlete, to provide purpose and balance for drinkers seeking more.

“As someone who loves beer and running, having the opportunity to brew a beer that helps runners celebrate their hard work was a passion project for me,” says Shelley Smith, Advanced Cicerone and Manager of Research & Product Innovation at The Boston Beer Company. “Understanding what is important to runners is what made brewing this beer different from what is currently available. While most brewers are stripping flavor to hit a certain calorie mark, we focused on brewing a beer that not only fit what runners were looking for, but also delivered a great taste.”

As she developed the recipe, Smith invited other runners – including her brewery teammates as well as decorated champions Meb Keflezighi and Desiree Linden – to gain insight into what drinkers and athletes want in a beer.

“I’ve run my fair share of marathons over the years, and there are countless finish lines throughout the training process that deserve a celebration. Anyone who has trained for a marathon – who is dedicated enough to wake up before dawn or face the elements to get their miles in – knows that part of training is running for the reward,” says marathon legend Meb Keflezighi, the only athlete ever to win the New York City Marathon, the Boston Marathon and an Olympic medal. “26.2 Brew celebrates runners’ hard work and achievement with high-quality ingredients and a really great taste.”

The new 26.2 Brew evolved from the original Boston 26.2 Brew, available for the past seven years in and around Bostonduring the Boston Marathon, the world’s oldest annual marathon.

“Boston was an incredible experience for me last year, and I can’t wait to return,” says Desiree Linden, two-time Olympian and the first American woman to win the Boston Marathon open division in 33 years. “I’m especially looking forward to celebrating all of the runners post-race with a new 26.2 Brew. Beyond Boston, I’m thrilled to be able to share this beer with other runners and beer lovers across the country for the first time. I know they’ll enjoy it as much as I do.”

The 26.2 Brew packaging and national point-of-sale materials will proudly display the unique Boston Athletic Association (B.A.A.) unicorn logo, the symbol of the Boston Marathon, epitomizing respect and appreciation for the incredible achievement and dedication of marathon running and of the B.A.A.’s long history as “The Marathon.” 26.2 Brew will be the official beer of the Boston Marathon, enjoyed by thousands of runners and spectators at events leading up to and on race day.

“Like the Boston Marathon, The Boston Beer Company is part of the fabric of our great city,” said Tom Grilk, CEO of the Boston Athletic Association. “This year, we are excited to extend our relationship and help make Marathon Brewing’s 26.2 Brew the beer that runners reach for on race day and beyond.”

In addition to the Boston Marathon, Marathon Brewing will sponsor select marathons nationwide, including the Los Angeles Marathon, the OC Marathon and the Myrtle Beach Marathon as well as have a presence at additional races throughout the country.

About Marathon Brewing Marathon Brewing, a new endeavor from The Boston Beer Company, allows brewers to experiment and develop beers with a new wave of drinkers in mind. As consumers seek better alternative options in their daily lives, they also look for purpose and balance in what they eat and drink. No matter what Marathon Brewing is creating, it always chooses the best ingredients possible to deliver the highest quality product for drinkers seeking more.