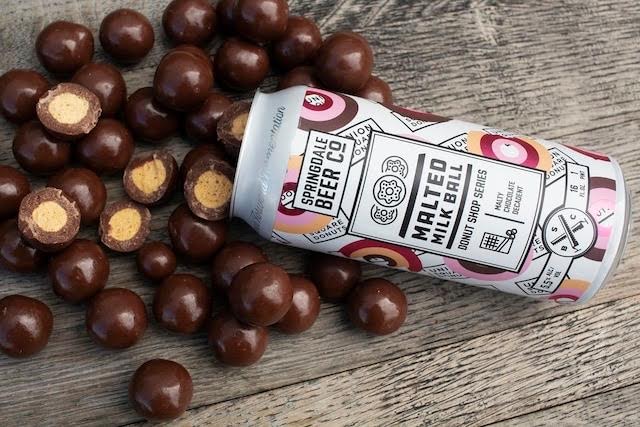 for a limited-edition collaboration beer and donut

The Springdale x Union Square Donuts Malted Milk Ball Porter was made with 110 large boxes of Malted Milk Balls, chocolate malts and tapioca to land on this truly incredible decadent beer. We boiled our wort down to make a thick malt syrup that is being used in the accompanying collab donut, a Malt Glazed Chocolate Ganache Donut topped with Milk Chocolate Pearls.

“The donut tastes like a modernized ‘Whopper’ – the malt syrup made from Springdale malt, the smooth milk chocolate ganache, and the fun crispy pearls all play on this favorite candy we love to enjoy. The malt used in the glaze and the beer has complex notes of warmth and caramel. that play against the creamy, rich milk chocolate. And what would a ‘Whopper’ be without the fun, crunchy pop we deliver with the milk chocolate pearls!” – Sarah Belisle, Head of Culinary Production at Union Square Donuts

“The deliciousness of donuts and beer were destined to be together. We feel the same way about Springdale and Union Square Donuts. We didn’t know it until we met, but our two companies were meant to collaborate on something to wow the world.” – Rob Day, Senior Director of Marketing at Springdale Beer Co.

“The way business is being done has changed overnight or maybe it’s really going back to a time where producers gathered together to support each other and celebrate each other’s goods. This partnership with our friends at Springdale Beer Co. is exactly that. We are two local businesses who are committed to our craft, driven by working with exceptional ingredients, honoring classic techniques and respecting tradition. We spent months together, telling stories, sharing ingredients, recipes, donuts and beers and we finally landed on beer and a donut that celebrated the flavor profile of the nostalgic malted milk ball.” – Josh Danoff, Co-Founder of Union
Square Donuts & Chief Donut Officer

Cans of beer are available for retail purchase at the Jack’s Abby Beer Hall, with draft being poured in the Beer Garden

Saturday, October 10th & Sunday, October 11th:
A limited number of Donut & Beer packages will be available for pickup at the Jack’s Abby Beer Hall on Saturday and Sunday morning. For $35, you receive a 4-pk of Malted Milk Ball Porter and a half dozen Union Square Donuts, including 2 of the collab donuts. To purchase, visit jacksabby.co/order, starting at 8pm the night before.

Monday, October 12th:
Beer will be available at select retail accounts starting Monday, October 12th. Use the Flavor Finder on the Springdale Beer Co. website to find out which accounts near you will sell the beer: ​https://springdalebeer.com/beer-finder/

The Springdale and Union Square Donuts collaboration for Malted Milk Ball Porter will also be kegged exclusively for Time Out Market in Boston. Union Square Donuts is at the Market as well and the Malted Milk Ball Donut will be available. This all starts on Friday, October 16 and will be available every day the Market is open while supplies last.
Wednesday – Thursday 5:00 PM – 9:00 PM
Friday 5:00 – 10:00 PM
Saturday 9:00 AM – 10:00 PM
Sunday 9:00 AM – 10:00 PM

Springdale Beer Co. is the incredible result of what happens when brewers wonder “what if” and pursue
that curiosity to the fullest. Based in Framingham, MA, Springdale was created to push the limits of
fermentation and explore flavors with the hope of creating bold new beers to share with friends. That’s
why Springdale launched with the largest barrel program in Massachusetts. Over 1,300 barrels currently sit in the space, working their slow magic on beautiful beers. But that wasn’t enough. Next the team dove into IPAs, traditional European beers with new twists, and fruit-forward kettle sours. All of these were created to explore fermentation forward beers and find new ways to share them with beer drinkers.
Springdale was created in a unique way as well. The brewers of Jack’s Abby had been cultivating award-winning craft lagers for years, but found themselves wanting to push the limits of beer far beyond their core, traditional lagers. That left them with only one choice – start a whole new brand. That curiosity and willingness to take risks is what launched Springdale. The quality and expertise in this brewery is what drives Springdale.

Union Square Donuts is an award-winning donut company with locations in Boston, Brookline and
Somerville, MA. We pride ourselves on our commitment to producing the best donuts possible, using
the highest-quality ingredients, while pushing the creative boundaries of flavor combinations and
remaining firmly rooted in traditional pastry techniques. We love making donuts and that care, passion,
and happiness is in every donut we create. For more information check us out online:
http://orderunionsquaredonuts.com/ Instagram:@unionsquaredonuts.com